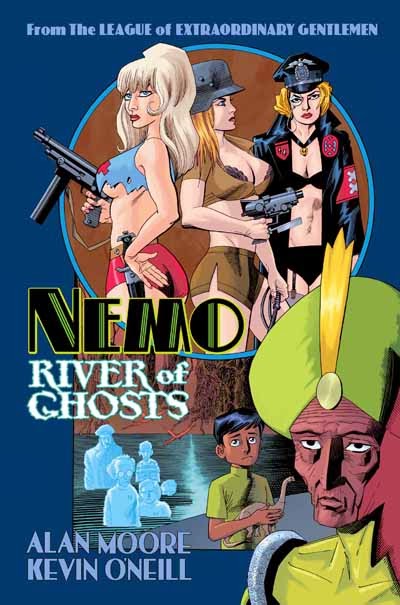 Nemo: River of Ghosts is a brand new chapter of The League of Extraordinary Gentlemen to be published in March. The 56 page book is written by Alan Moore and drawn by Kevin O'Neill, two top comics talents who I've always liked both as creators and as people.

The book will be published by Top Shelf in the US and by Knockabout in the UK. Here's the details from the Top Shelf website:

In a world where all the fictions ever written coalesce into a rich mosaic, it’s 1975. Janni Dakkar, pirate queen of Lincoln Island and head of the fabled Nemo family, is eighty years old and beginning to display a tenuous grasp on reality. Pursuing shadows from her past—or her imagination—she embarks on what may be a final voyage down the vastness of the Amazon, a last attempt to put to rest the blood-drenched spectres of old.


With allies and adversaries old and new, we accompany an ageing predator on her obsessive trek into the cultural landscape of a strange new continent, from the ruined city of Yu-Atlanchi to the fabulous plateau of Maple White Land. As the dark threads in her narrative are drawn into an inescapable web, Captain Nemo leads her hearse-black Nautilus in a desperate raid on horrors believed dead for decades.
Through the exotic spectacle of an imagined South America, Alan Moore and Kevin O’Neill steer their fifty-year-long Nemo trilogy to its remarkable conclusion, borne upon a RIVER OF GHOSTS. -- a 56-page full-color hardcover, 6 5/8” x 10 1/8”, co-published by Top Shelf and Knockabout.