The dynamic art of Mike Noble 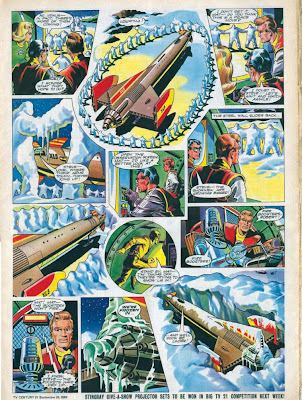 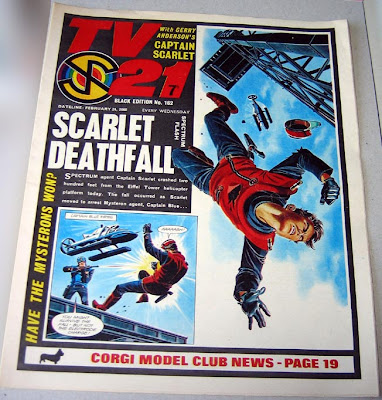 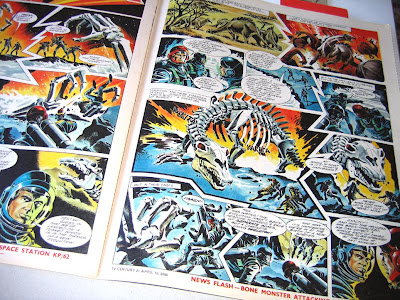 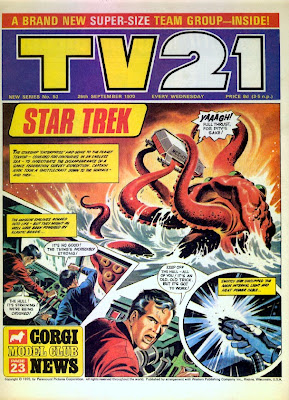 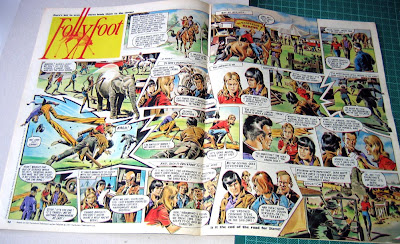 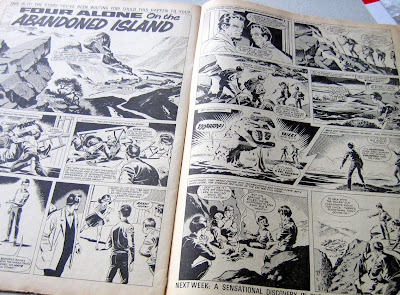 In its continuing intention to spotlight British talent for the benefit of its American readership, the latest issue of Image Comics' Elephantmen (which came out yesterday) carries a three page colour article on the artist Mike Noble (b.1930). The feature is well illustrated with art from Noble's Fireball XL5 pages from TV Century 21 so today's blog will focus on his other work, as a companion piece to the article in Elephantmen. However, I'll be linking to other websites that feature Noble's work so click on the links for more information.

I've been an admirer of Mike Noble's artwork since I was six years old when, in 1965, he took over the art task on the Fireball XL5 strip in TV Century 21 from issue No.6. Although it's often Frank Bellamy's work that fans love most from that comic, for me the standout talent was Noble. Mike's work had a dynamic energy and excitement that made even the most ridiculous plots compelling to read. Most importantly, although he never cheated on detail, his layouts were clear and easy to follow: an essential element of any children's comic.

Mike had a long run on Fireball XL5, but he also had a stint on the Captain Scarlet strip for TV21, producing some striking covers (such as the one shown on this blog). He also illustrated most of the Zero X strips for the same comic during the same era (late sixties). One of those strips that made an impression on me was the one shown here; an implausible episode on the "Planet of Bones" featuring a living dinosaur skeleton. Again, Mike turns a daft script into a dramatic and memorable scene.

As TV21 began to wind down, Mike did less for the title, but did have a respectable run on the Star Trek strip, producing some eye-catching covers such as the one I've scanned here. In 1971 he moved over to the new Look-In comic (edited by ex-TV21 editor Alan Fennell) to produce fantastic work on the two page Timeslip strip. (Samples of which can be found at this site.) The strip offered Noble an opportunity to move away from futuristic settings and illustrate various periods in history. His next strip for Look-In, Follyfoot, was set firmly in the present day with no sci-fi whatsoever. I'm showing a centrespread from that series here. Unfortunately this page was printed slightly off-register but it's a great example to show how busy yet easy-on-the-eye Noble's layouts were, and how he was able to expertly draw any environment, from inter-planetary action to domestic adventure.

As can be seen from these few examples, Mike was a master of colour art, and in the days when most British comics were in black and white he was rightly given the opportunity to shine on the few colour pages they had. However he did produce black and white too, notably on the Robin of Sherwood and Worzel Gummidge serials for Look-In and also on a mostly-forgotten strip for Cor!! (Four Alone on The Abandoned Island was one of Cor's rare adventure strips and I think Mike only drew the first three chapters or so. The example above is from Cor!! No.1)

Mike Noble is mostly retired now although he did return to the world of Gerry Anderson in the 1990s drawing covers and colour pin ups for Fleetway's Thunderbirds comic (and their companion comics Captain Scarlet and Stingray). The pages were as vigorous as ever. In November 2004 he was one of the guests at the Bristol Comic Expo, (incredibly his first comic convention) and in his interview he came across as a true professional. Afterwards it was an honour to meet and shake the hand of someone that I (and I'm sure many others) consider to be one of the most talented and versatile comic strip artists of any generation.

As I said at the top of this item, I've been a fan of Mike Noble's work since 1965, but he's been in the business for longer than that. For a great interview with the man visit the excellent Technodelic website here.

Update: 3/2/2007: Due to it being such a memorable scene for old readers of TV Century 21 I've uploaded a scan of the "ring of snowmen" page from the Fireball XL5 strip from 1965. One of Mike Noble's greatest!

Makes me want to buy a TV21 now...amazing bright colours and graphic images..
also a good link to the interview about him...
the exciting frames are amazing...also loved the jaggediness on Follyfoot...I have some early Cor!! so I'll read that adventure story...my collecting of comics has been all about the funny comics you've opened a new horizon for me which I've overlooked...e.g. TV21...Valient..Look-in ..the power comics etc..

The early issues of TV21 are well worth a look, - Mike Noble, the Embleton brothers, Eric Eden, Richard Jennings... all top artists.

Pleased to hear the articles have stirred an interest in adventure comics. Having grown up in a time when British weeklies contained a mixture of adventure, humour and sometimes Marvel superheroes I've always been interested in all the genres.

Regarding Mike's work on Cor!! - I only have the first three issues now but I seem to recall another artist took over "Four Alone" with issue 4 or thereabouts (leaving Mike free to go to work for Look-In I assume).

Well done Lew! I have followed Mike's work through the decades and was so privileged to write the biography in 'True Brit', the book on UK comic artists edited by George Khoury.

As you say Mike's work always made compulsive reading, but he would NEVER say that he was given crap scripts, he's too much of gentleman.

One of my memories is the ring of snowmen encircling Fireball XL5 and the wonderful aliens with TV screens in their backs! I asked him about those and he said, in true Noble fashion, "Oh that was due to the very vivid images given to me in the scripts, Angus Allan for example, was excellent"

I never saw the "Cor!" strips despite reading that comic from the start. I must have given up before those appeared!

Yes that "ring of snowmen" strip was memorable. One of my favourites too (and one which Richard Starkings uses to illustrate his Mike Noble article in Elephantmen No.6).

Regarding the Cor!! strip, "Four Alone" the example was taken from the very first issue of the comic.

PS: I've just added a scan of that memorable "ring of snowmen" page!