The Daleks are back! On telly tonight! Doctor Who, BBC1, 6.35pm. Fantastic! Some people are already claiming it's Dalek overkill, complaining the metal dictators shouldn't be in every series of New Who. Overkill? I lived through Dalekmania mate! Now that was overkill. And we loved it!

"Dalekmania", as it came to be known, was the huge push for Dalek merchandise that took place in the 1960s after it became clear that the tin pepperpots were the biggest thing since The Beatles. There'd be other "manias" to follow (Batmania in 1966, Monkeemania in 1967, and so on) but Dalekmania was probably the first tv-related merchandise boom in history. From battery-operated toy Daleks to Dalek soap, the shops were full of strange little collectibles.

Here's a few examples from that period. Click on each photo to enlarge it: 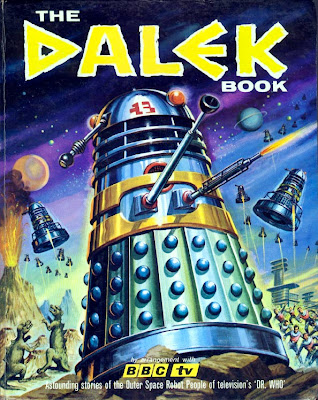 The Dalek Book: Published in 1964 by Panther Books this hardback annual was the first time The Daleks had appeared in comic strip form. Written by Doctor Who scriptwriters David Whittaker and Terry Nation, this fully authenticated book showed the Daleks in flight over 40 years before they'd gain that ability on tv. (Although in the comics they flew by means of their "Transolar Discs" but the imagery of the flying Dalek armada is clearly what inspired the similar scenes in the 2006 Doctor Who tv episode Doomsday.) The artwork shown here is by Richard Jennings and the opening pages to the lead strip are shown below: 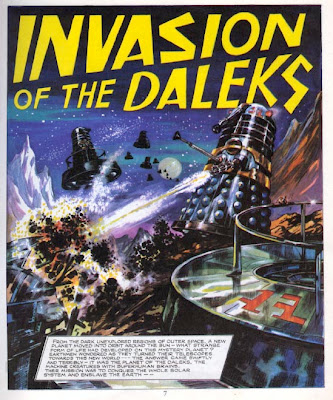 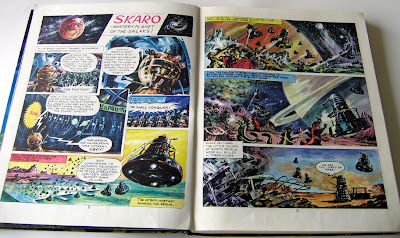 Jennings was also the first artist chosen to illustrate the regular weekly Dalek strip on the back cover of the new comic TV Century 21 in January 1965. This first episode, shown below, reveals the origin of The Daleks years before tv's slightly different origin story Genesis of the Daleks. 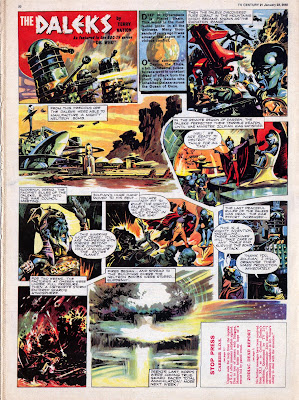 With smoking not the social sin it's considered today, confectionery known as "sweet cigarettes" were popular for any kids who wanted to emulate their parents' addiction. (They're now called Candy Sticks, but are still white and come in a packet.) In 1964 Dr.Who and the Daleks Sweet Cigarettes had a nice box design inspired by the Dalek Book and each packet contained a free picture card featuring a fairly windswept and active Doctor. 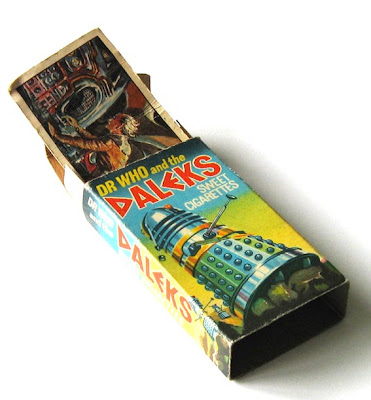 Doctor Who Give-A-Show Projector was a must-have toy for Christmas 1964. Containing a plastic projector (a fancy torch with a lens, basically) and numerous short complete comic strips to feed through by hand to see them projected onto a wall. Eee, the things that pacified us in the years before video! Box and one of the strip-slides shown below. As you can see, the quality of the script wasn't great, but we didn't mind. This was Doctor Who to watch when you chose to, on your wall! The future had arrived. 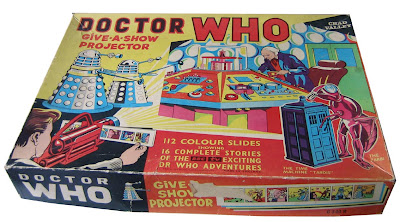 I remember the black and gold Dalek Badge shown below being sold in Woolworths, although I assume it was sold in other places too. A nice item, although I can only assume the word DALEK was embossed across it for the benefit of thick kids who somehow hadn't noticed the other zillion items of Dalek merchandise on the shelves. 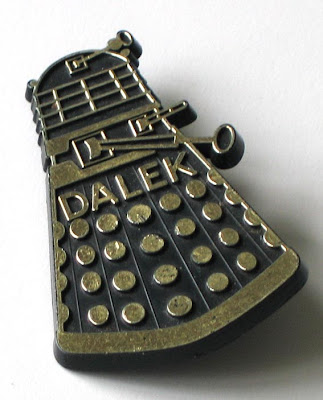 There were several Dalek toy figures produced during the height of Dalekmania, from battery operated bump and go toys to virtually indestructible durable plastic ones you could throw down the stairs without causing a scratch. A very collectible version however were the Dalek Rolykins; inch-high models with a ball bearing in the base which enabled them to glide along a flat surface when gently pushed. The colours available were silver, red, and black, one per box, but I painted one gold to emulate the Emperor Dalek from the comic strip. (Not knowing that by 2005 gold Daleks would be the standard in the revived tv series.) 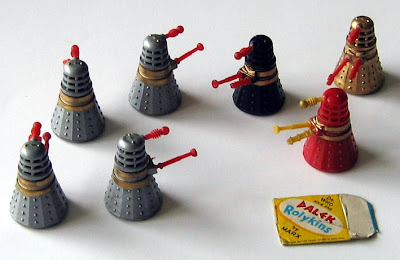 This has been just a small selection of the many Dalek items that were available in the mid-1960s. No doubt the new Dalek merchandise of today will be equally as collectible!

One thing occurs to me though: today we have brand new Dalek toys, three different Doctor Who magazines, and even two Doctor Who annuals per year (by different publishers) but where are the Dalek comic strips? Surely it's time that the classic TV Century 21 Dalek strips were reprinted again? Or perhaps a reproduction of The Dalek Book similar to last year's facsimile copy of the first Dandy Book? Who owns the rights to those strips now? The gap in the market is surely there!
Posted by Lew Stringer at 15:52

I actually found that quite fascinating. See I was a couple of decades away from being alive for Dalek-mania, or any other mania for that matter. Someone will have made a bomb with all that merchandise... On a DW note, if you get a chance Lew, get down to the Doctor Who Exhibition in Manchester. Unless you get there early you might have a long waiting time, but it's quite good. I got there for 12.30 and got passes to go in at 3.30. It's not too extensive, but what is there is very nice. Thanks for the eye opener- See you in Bristol!
Lewis

Took me waaay back and I remember having many of those items.

Thanks for the memories.

Lew, that's a great piece on Daleks. However, if my youngest daughter ever sees any of those items, then be prepared for the world's biggest tantrum as SHE will want them and SHE will have them or else everybody in the world will know about it

No doubt the new Dalek merchandise of today will be equally as collectible!

Aah, but it's like comics. Those 1960s toys are valuable because most of them were bought by kids who broke them, and they ended up thrown away or chewed to bits by the dog.

Half of the new stuff is being bought by grown-up collectors who'll never take it out of the box, so it'll never be all that rare.

True, the new stuff won't be as scarce as the original merchandise but I'm sure there'll still be new Who fans in 40 years time who'll want to collect the "vintage" 2007 toys no matter how little they may be worth in monetary terms.

Ah, it's funny what stirs the grey matter to trip down memory lane.

Picture the scene - a Saturday in 1965. "I mustn't miss Dr. Who, but Mum's told me to hang on at the School fair in the village as we bought raffle tickets! CURSES!"

The lucky number for me was 25 and I won one of those push-a-long grey plastic daleks - no remote control for me, but was I complaining NO WAY, I had a D-A-L-E-K ....WOW!

The entire Doctor Who Give-A-Show collection is available to watch as videos on YouTube - do a search for "waffyjon" and you'll find all my Give-A-Show videos!

There was a variation on the back of the Dalek sweet cigarette box: one style showed an image from one of the cards in the set (a red space plane/rocket) and the other a ringed planet (which I always assumed was Skaro when I was a child). The card artwork looked like it was painted by Richard Jennings, who produced the art for the Dalek feature in TV21 comic.

The point of sale cartons were things of beauty, too. Full colour, with a lid that was scored and die cut so that its large image of a dalek (artwork in the same style as the individual packet fronts) could be folded to stand upright at the back of the boxful of packets on the counter. I was given three of these as a child by a friend of my mother's who ran a sweet shop in the village. They were cut up to decorate my wall. They're as rare as hen's teeth, now, and must be worth a bob or two in good nick.