The Bristol International Comic Expo is over for another year and, from all accounts that I heard there, a good time was had by all. Visibly busier than last year, with thousands in attendance and numerous guests from the world of comics. Here's just a few of the many comic creators and exhibitors who were there during the weekend (click on highlights in the text to visit their websites etc. Click on photos to see them enlarged.): 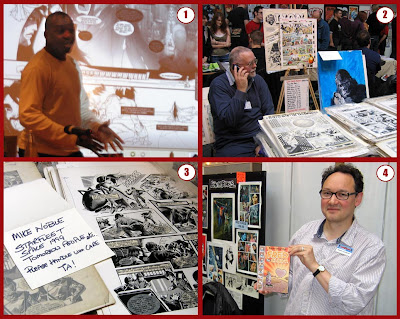 1: Siku explaining the concept of his "kick-ass" version of Jesus, during a presentation of his artwork for The Manga Bible, during the Manga panel on Saturday morning.

2: Phil Clarke (organizer of the very first British comics convention way back in 1968) has, with a partner, recently bought the entire archive of IPC original comics artwork from the 1960s and 1970s! Better still, he's offering the pages for sale to the public! Some genuinely important items of comics history here, including Adam Eterno, The Spider, Jet Ace Logan, Mytek the Mighty... you name it, Phil's probably got a page of it you can buy! Contact Phil at blasebooks@aol.com to inquire more info.

3: Phil's art collection also includes pages from Look-In, such as artwork by the fantastic Mike Noble and John Burns.

4: Roger Langridge with his highly recommended Fred the Clown book, published by Fantagraphics. 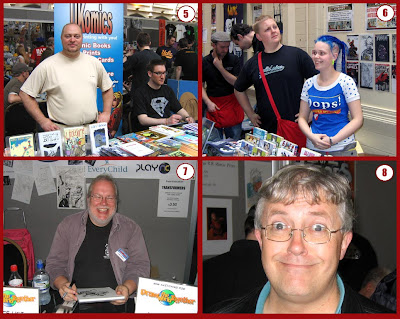 7: Mirthful Mike Collins, seemingly drawing non-stop over the weekend for legions of fans eager to have a piece of original art by the artist of the Doctor Who comic strip. 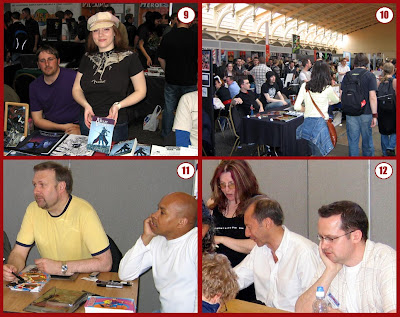 9: Visible evidence that readers of Sonic the Comic didn't grow up to be nerds, Zoe Stead is now a talented comic artist and author. Her prose novel The Amulet of Vichalace is now available from Amazon.co.uk.

10: Crowds of comic fans on a very busy weekend. The layout of the stalls inside the exhibition hall was much better this year and helped to make the whole event a more enjoyable experience.

12: Jane, one of the Expo organizers, with V for Vendetta artist David Lloyd (whose new graphic novel Kickback is available from Amazon.co.uk.
To his left is Beano and Viz artist Paul Palmer. 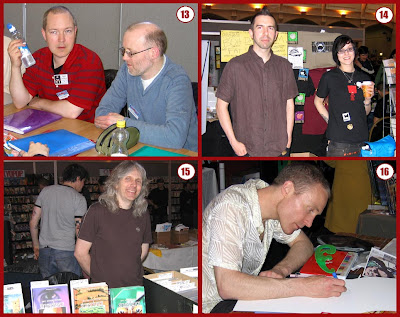 13: Nigel Dobbyn, who seems to have drawn everything from Judge Dredd to Billy the Cat, flaunting a bottle of water before a rapidly dehydrating Dave Windett .

14: Humour comics genius or bonkers madman? You decide! It's Jamie Smart, creator of unmissable My Own Genie and Space Raoul in The Dandy, and indie adult comic Bear! And like an oaf I've forgotten his girlfriend's name. Sorry!

15: I must have had a ten minute conversation with Gary Millidge at every UK comics convention since 1979. Meaning I've only actually known him for about four hours. But that's enough to know that he's one of our top talents and that if you're a comics fan of taste you'll already have Gary's absorbing Strangehaven graphic novels on your bookshelf.

16: Behold! It's jovial John McCrea doing a sketch for a fan who's so excited by the prospect that I had to cut him off the picture in order to adhere to the Terms and Conditions of this website. 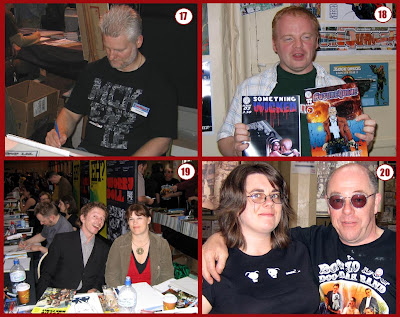 17: Attending his first UK comics event for many years, Tim Perkins had a table to promote the range of artwork and gift items from his online shop at http://www.wizards-keep.com/

18: British comics need a revolution and when it happens it'll come from the independent sector via titles like the ever-improving FutureQuake. Art editor Dave Evans is ready!

19: Yay! It's the legendary Glenn Fabry and his wife Nikki. Respected amongst his peers and his fans for the high quality of his artwork, Glenn has illustrated strips and painted covers for 2000 AD, Vertigo, and more.

20: Although both brilliantly funny cartoonists in their independent careers, Laura Howell and Hunt Emerson team up every week to produce the Ratz strip for The Beano.

21: Dynamic Dave Gibbons hosts the ever-popular Hypotheticals panel on the Sunday afternoon, with an all-star line up including Kurt Busiek, David Bishop, and Jock.

22: Just a few of the many independent comics available at the Expo. Who says British comics are dead? Granted, some of these titles aren't profit-making, but over 25 years ago Viz began as a small print-run title and developed into one of the top selling magazines in the country! Inevitably, with the sheer number of different indie comics being produced now the chances are that some of them will hit the big time. From little acorns...

Meanwhile, amongst the major UK publishers, Titan Magazines are expanding their line this year. The recent launches of Shaun the Sheep Comic and Teenage Mutant Ninja Turtles Comic (both featuring some brand new comic strips) will soon be joined by the return of the Transformers as a British comic, which will include some new material by Simon Furman and Geoff Senior (the team who made the original Transformers comic such a hit in the 1980s).

Not only that, but Titan also have a new Tank Girl series planned, written by Alan Martin and drawn by Mike McMahon! Other books include collections of classic Jeff Hawke newspaper strips by Sydney Jordan, and in October, at long last, the first UK edition of the hugely popular Norwegian strip Nemi by Lise Myhre, reprinting the English language version from Metro.

But the happiest news of the weekend came as Dave Gibbons announced to the audience that he'd been absent from the Saturday events because he'd attended the wedding of Lost Girls creators Alan Moore and Melinda Gebbie. Congratulations to the happy couple who, as ever were resplendently stylish as this photo on CBR illustrates.

UPDATE! 24th May 2007: Found a few more photos I'd forgotten I'd taken (on my mobile) plus one of me that Gary Millidge took: 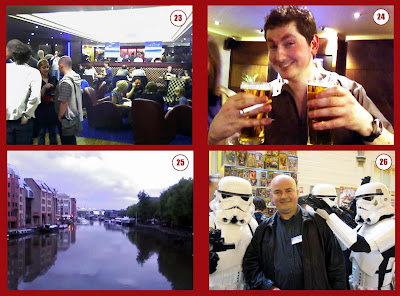 23: Comics folk gather in the bar of the Ramada Hotel on the Saturday night. This was at 8.00pm. By midnight the bar was packed and it ran dry!

24: Ben McCool the Two-Pint Kid! How are you going to smoke that cigarette then Ben?

25: The River Avon. The comparative amount of liquid that was drank in the Ramada Bar.

I'm presuming that you enjoyed hypotheticals... :)

Damn, I missed Nigel Parkinson and Wayne Thompson - and I was sat at the other end of the same table. Great shame that.

Hunt and I also team up to fight crime, but we keep that one quiet;)

Good for Phil Clarke - but I hope the rights holders kept hi-res scans of all that original art, so that any future reprints don't have to be shot from published pages.

That's what occurred to me too Steve. I'm amazed that IPC have sold off the originals at a time when there's growing interest in reprinting that material.

Admittedly some of the word balloons have gone opaque with age, but it'd be far easier to clean that up on screen than fiddling around trying to clarify scans from the comics.

To be honest I'm guessing Phil is this man, as reported on Lying In The Gutters....

It appears that earlier in the year, British publisher IPC sold a large amount of original comic book artwork from the 60s, 70s and 80s to one UK dealer, who has been selling them on and off again on eBay. Many of the artists were European and have only recently discovered this act. Since a number are in conflict with IPC over returning that very same artwork, stating that IPC has no claim to the work, this could get rather messy. Especially if the previously mentioned "Patty's World" is involved.

IPC are part of the Warner network of companies, as are DC Comics. DC have published a number of works based on old IPC properties.

Phil and his business partner bought the artwork from IPC in good faith. I read that gossip column and the first thing I thought of was how in the 1980s and 1990s IPC and the companies that later owned their comics (Fleetway, Egmont) never presented a problem in returning art to those of us who wanted it. At least that's how it was on OINK! and BUSTER. I have most of the pages I did for those comics, which were returned on request. I do remember though that the editor of Buster told me only I and one or two others wanted our art back. The rest had no desire for it. (Didn't they foresee eBay etc?)

The situation may have been different in the 1960s and 1970s of course, but I can only speak from my own experience.