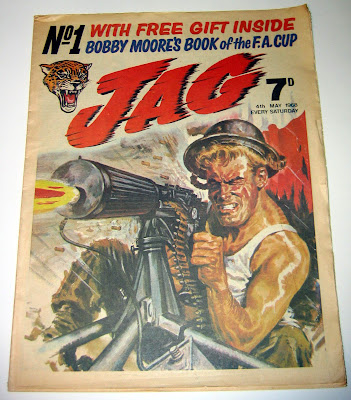 Jag was the last traditional boy's adventure weekly published by Fleetway in the 1960s. Launched on Saturday April 27th 1968, the comic was somewhat different to its companion comics. Tabloid sized, on better quality paper, and with 4 of its 16 pages in fully painted full colour (and four in spot colour), Jag was closer in style to Odhams Eagle than Fleetway's black and white newsprint comics such as Lion or Tiger.

Sadly, this dominating format perhaps proved a burden to Jag, as the comic lasted just 48 weeks, and towards its end it had been revamped into a 32 page regular-sized comic (but still keeping the better quality paper). Why did it fail? Surely not because of the material, because Jag featured some of Fleetway's top talent doing some of their best work. Here's a selection of some of the most memorable strips in the comic:

The Mouse Patrol was illustrated by Eric Bradbury. Perhaps inspired by the Children's Film Foundation movies that were screened at ABC Minors Saturday morning cinema matinees at the time, the strip featured three plucky boys in World War Two. Set in the North African Desert, the boys set out in a stolen German tank to search for their missing fathers who had been captured by the Nazis. In a typically bizarre British comics twist, they were assisted by Cleo, a chimpanzee in a German helmet. 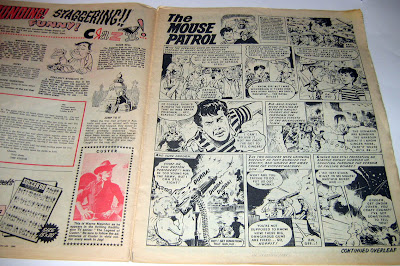 Cap'n Codsmouth, a humour strip initially drawn by Joe Colquhoun (and later by Doug Maxted) featured the slapstick crew of the S.S. Scuttlebutt. 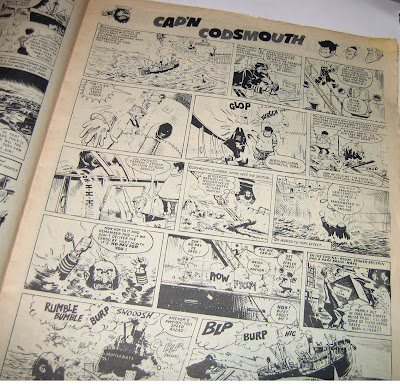 The Indestructible Man was drawn by Jesus Blasco, and like Blasco's Steel Claw strip, featured a hero who could turn invisible and also zap people with his fingertips. However, this hero, known in the present day as Mark Dangerfield, was an ancient Egyptian who had learned ancient secrets whilst being entombed for centuries, including the power of indestructibility. Inspired, I would strongly assume, by the Captain Scarlet tv series. However, The Indestructible Man could, after using his powers, age into a wizened old man and only bathing in fire would restore his youth. (Like all Jag strips, The Indestructible Man has never been reprinted, possibly because editors felt that readers might emulate him? A pity if so, as it's a very exciting strip with an offbeat and mysterious character.) 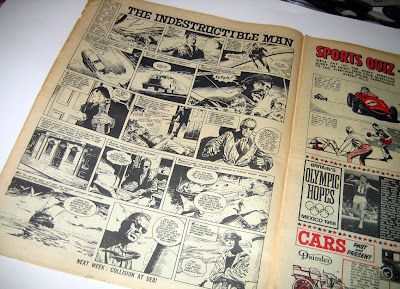 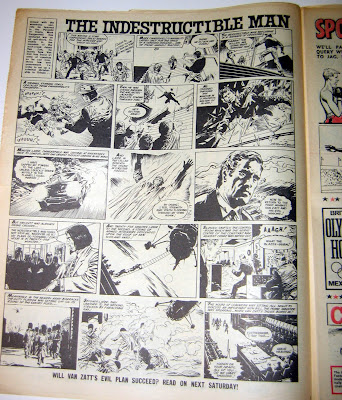 Custer occupied one page of Jag's full colour centre pages, giving artist Geoff Campion an ideal opportunity to relish in hand coloured artwork. The strip followed the traditional look and heroic characterization of General Custer, who I believe had appeared in a British comic before (Comet?) although these were, I think, brand new strips. Another artist took over the strip with later issues. 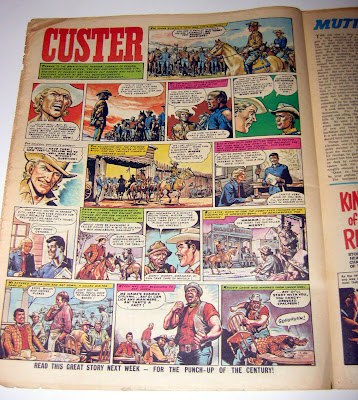 New World For Old was a favourite of mine. Not sure who the artist was, but the story, set in the year 3209, concerned an Earth-like planet which was populated by feuding factions based on different periods of human history. Confederate soldiers versus Roman warriors against a futuristic backdrop. Mad stuff. 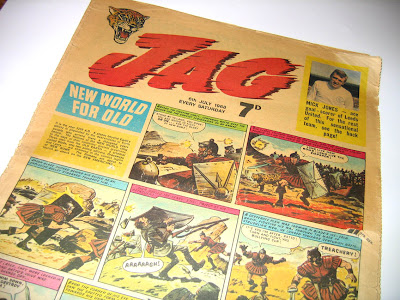 Obviously New World For Old's odd premise wasn't appealing to most of Jag's readers so after a short time it was shunted inside to make way for new cover strip Football Family Robinson. This full colour humour-action football family saga was illustrated by Joe Colquhoun (the original Roy of the Rovers artist, and long before he'd get grim and gritty with Charley's War). The strip became a huge hit with readers and survived for years after Jag's demise. 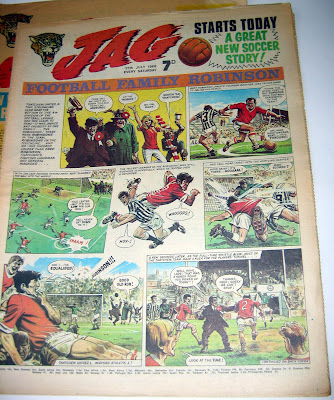 Boy Bandit was a young rebel fighting "the cruel Mexican government" and was initially drawn by Tom Kerr, turning in a superb job as usual. 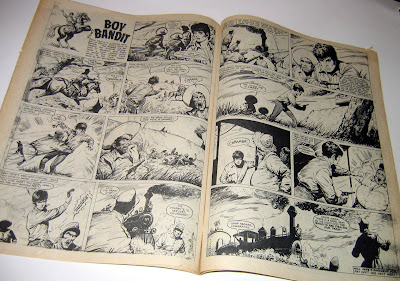 Despite these strong, well illustrated strips from the finest artists of 1960s comics, mixed with a few illustrated features, Jag's fortunes were not good. Its format meant it was a relatively expensive comic to produce. By February 1969 it changed format to a standard 32 page comic, and a few weeks later, with issue dated 29th March 1969, announced "Exciting News for all readers" as it merged into Tiger the following week. One benefit being that the new combined Tiger and Jag gained Jag's better paper and print quality. 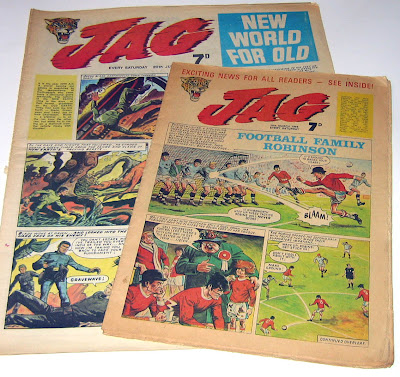 However, were poor sales the only reason Jag was canceled? At that time, late 1968 and early 1969, the media giant IPC emerged, absorbing Fleetway and Odhams and mercilessly axing comics right left and centre. I suspect that IPC had its own ideas about comics and what they considered to be acceptable sales figures, and those that didn't fit were either changed beyond recognition (Smash! and TV21) or axed outright (Pow!, Eagle, and Jag). IPC also had strong ideas for new "theme" comics (like Scorcher, and Score n Roar), and segregating the line into adventure and humour titles. Jag was probably seen as being a bit of a dinosaur with its variety of content. However, the titles that IPC later created in that vein, such as Thunder and Jet came nowhere near to the quality of Jag, last of the Fleetway line.

Although only a short-lived comic, Jag did produce spin-offs. 1968 saw the Jag Football Special published, and there were four editions of Jag Annual cover dated 1970 to 1973. 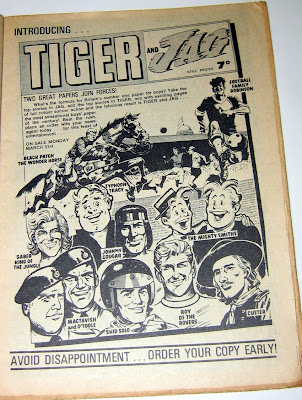 Ironically, Jag, the last Fleetway comic, was the first one from that publisher that I bought regularly. My late Grandad, one of the original Illustrated Chips readers when he was a boy in the 19th Century, bought me a copy because its format reminded him of the comics he used to read. (The edition shown a few photos above, dated 6th July.) I'd never seen it before but was immediately impressed by the excitement and colour of Jag's content and stuck with it for quite a while, and subsequently became a regular reader of Tiger and Jag, Valiant, Lion, and all the other IPC adventure comics. Thanks Grandad! :)
Posted by Lew Stringer at 22:15

I read JAG for a while as well, although TV21 was the comic put by for me each week. I only remember the strip about soldiers plucked from different time periods fighting on a strange alien world. I vividly remember the flying viking longships! A similar idea appeared in a Dr Who show, I think, and also many years later in the Light & Darkness War from DC.

My Grandpa and my Dad did exactly the same things with me, buying and influencing my early storytelling and reading habits.
Lets hope more folks start to do that again now with all the new interest and excitement here in the comics industry, mate.
BTW: See you shortly down in Birmingham.
Best,
Tim...
;))