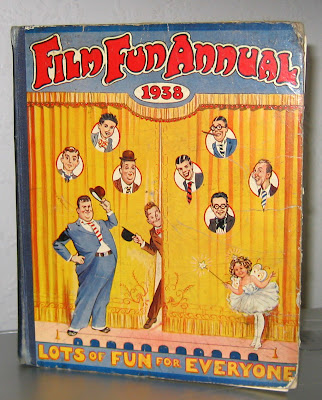 The traditional Christmas children's annual has it's origins in the early 19th Century with books such as The Christmas Box published in 1828. However this was a book of text stories and verse, not comics, but it and later titles such as the 1866 Chatterbox Annual (based on the children's paper of the time) helped to establish the concept of the hardback Christmas annual.

According to Alan Clark's excellent comics history book The Children's Annual (Boxtree 1988) the first "comic annual" (ie: featuring comic strip material) was The Playbox Annual in 1909 which featured Tiger Tim (also to star in his own annual). The book was published by The Amalgamated Press, who would come to dominate the Christmas annual market, - and continue to do so in later years as Fleetway and as IPC.

The Amalgamated Press annuals flourished in the 1930s with popular weeklies such as Illustrated Chips, Jester and The Funny Wonder having their own spin-off annuals. Film Fun, A.P.'s successful weekly featuring the movie stars of the day had been launched as a comic in 1920, but the first Film Fun Annual didn't appear until 1937.

Whereas the weekly Film Fun was entirely black and white newsprint, the Film Fun Annual 1938 had 160 pages with a full colour hardback cover, and contents printed with sections in colored ink on good quality white paper. (Not a drop of black ink on the interior pages; instead it'd be dark blue throughout one section, brown throughout another, then green, purple,... you get the picture. A crude attempt at offering coloured contents but it worked.)

Without further ado, let's take a look at some of the contents...

The book kicked off with a brand new beautifully drawn Laurel and Hardy strip by George William Wakefield (or Bill Wakefield as he was often known). Wakefield was the regular artist of the strip in the weekly and also provided the artwork for the cover of the annual. 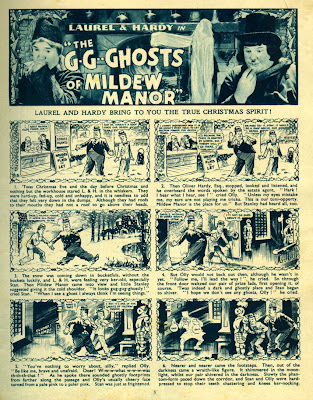 Only 60 of the book's 160 pages featured comic strips. The rest were shared by text stories and photographs of movie stars of the day. (Proving that reduced comic content in media-based annuals is nothing new.) The strips all ran to four pages each, although some were reprints from the weekly, editing two stories into one adventure. (Film Fun also sometimes updated reprints by pasting on new caricatures of up-to-date film stars over the faces of older past-it characters, but I don't know if that practice was used in this annual.) 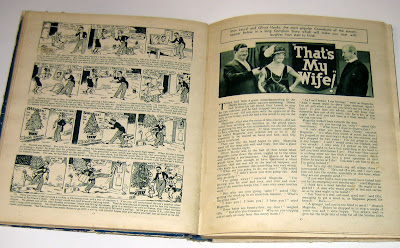 It's understandable that A.P. would devote so many pages to photographs. For a start, it was cheaper than paying comic artists, but it was also an opportunity to show photos in better clarity than the cheap newsprint of the weekly comic could offer. 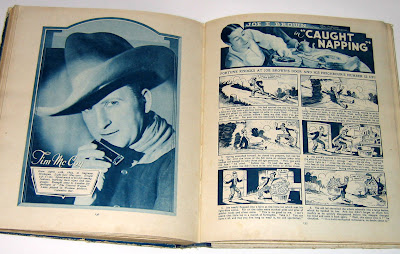 Editor Fred Cordwell reputedly had some taboos that he wouldn't allow to be shown in Film Fun. Allegedly this was mainly due to weird superstitions about octopuses which he considered bad luck, but he'd have any cleavage whited out too. However, it didn't stop him adding a bit of glamour to the first Film Fun Annual in the form of a photo spread on "Stars who have danced their way to fame". Presumably not the euphemism of "dancing" sometimes used. 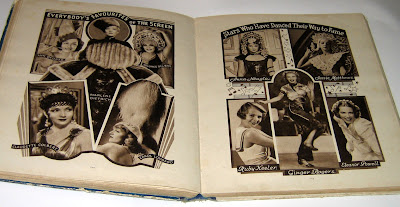 Some of the strips in the book featured a Christmas theme, such as this Wheeler and Woolsey adventure involving presents, snow, Christmas pud, "poor kids", and a slap-up feed: 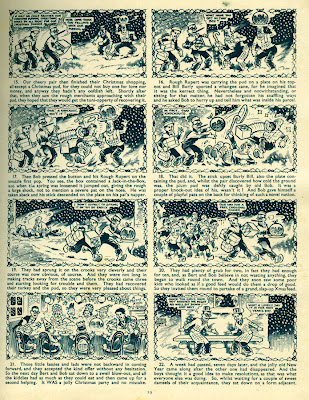 Suggesting a humour comics plot revolving around child abduction to a children's comic editor today would probably do you no favours but in 1937 the Joe E. Brown strip All At Sea turned kidnap into a comedy farce. The boy, a heir to a fortune, was abducted solely for reasons of blackmail, and appears oblivious to any danger, but it still seems an odd subject matter from a modern perspective. 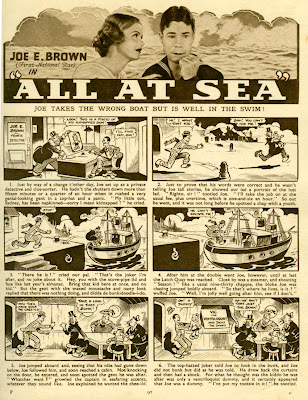 As is sometimes the case with some modern annuals, the back cover of Film Fun Annual 1938 featured an advertisement. In this case, promoting Atora Beef Suet and canned plums ("in heavy syrup"). No doubt a luxury in 1937. This picture is supposed to be appetizing but 70 years on it looks quite revolting. Somehow it reminds me of a scene from the morgue in CSI. 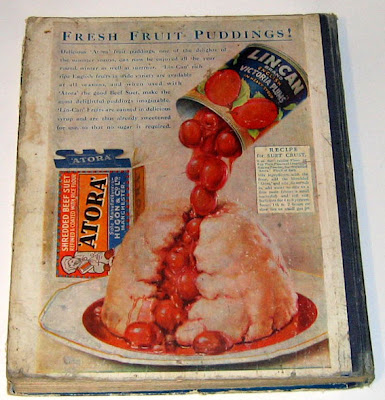 There you have it; over the past week or so a (very) brief look back at the changing styles of 70 years of Christmas comic annuals in the UK. Hope you've enjoyed it. Happy New Year!

Was the first Chatterbox annual really 1866? earliest i've heard of (from that ampneycrucis website) was from the 1870's

Also do you know when the weekly (i'm presuming) paper started?

I have the 1908 edition, i'm thinking of reading the issues contained in it on the same schedule they would have been released on, just 100 years later

Note that Joe E. Brown is identified as a "First National Star" in the heading, even though Brown had left First National(actually Warners)two years earlier and was now working for David Loew.

The book was published in Autumn 1937 and the strips would have been drawn months earlier, possibly in late 1936, so that might explain the mistake.