Carol Day collected on the net 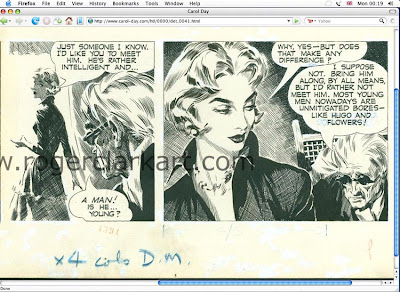 Classic newspaper strip Carol Day now has its own website, with complete stories to read online and scans of the original artwork!

Carol Day ran from 1956 - 1967 and was syndicated in 70 newspapers around the world. The story concerns Carol's life and loves and the people she encounters. It might well be dismissed as a "soap" today but it's far more realized and sophisticated than that. Artist David Wright was a master of light and shadow, evoking atmosphere with his linework. Although the style is photo-realistic the rendering displays comic techniques at their finest. Pure gold.

The Carol Day website is expertly designed and features two complete serials so far, with a third to follow soon. The strips are from David Wright's own scrapbook which he clipped from the Daily Mail. The website also features actual size scans of his original artwork for fans to study, and the originals are available to buy from the website.

Sadly, David Wright passed away many years ago, but the website is a fine tribute to his strip which I'm sure will attract fans old and new to his thoughtfully crafted artwork. http://www.carol-day.com/index.html

Cheers for the link. I had heard of Carol Day but never seen samples before. Simply stunning. Hard to believe that despite being syndicated worldwide it's never been seen in the US. One for Titan to have a look at, perhaps, although given that it hasn't been seen in the US that unfortunately may count against it!

Then again Nemi hasn't been seen in the US either and Titan published that, so hopefully Carol Day has a chance.

However, I'm wondering how well the strips would reproduce. As scans from the newspapers they look perfect on screen, but would those fine lines drop out or muddy up in reprint after the yellowed pages were cleaned up? (Hopefully top quality copies have been taken from the originals before any are sold, which would be better to shoot from than the Daily Mail clippings.)

Looks like the style of that one Commando artist who always does the flying stories (though also did a navy one in the "All guns blazing" book), i've got to check this out!