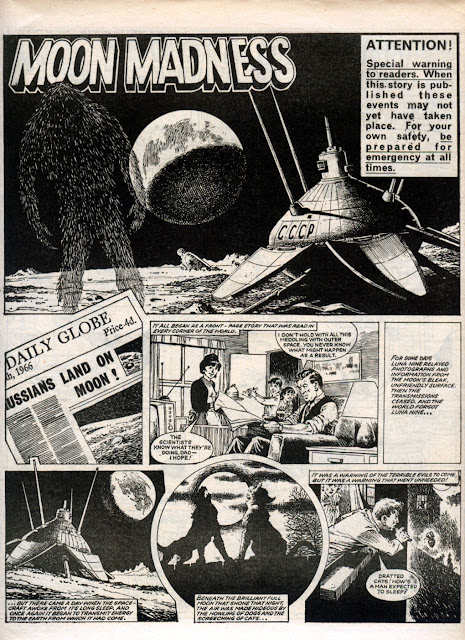 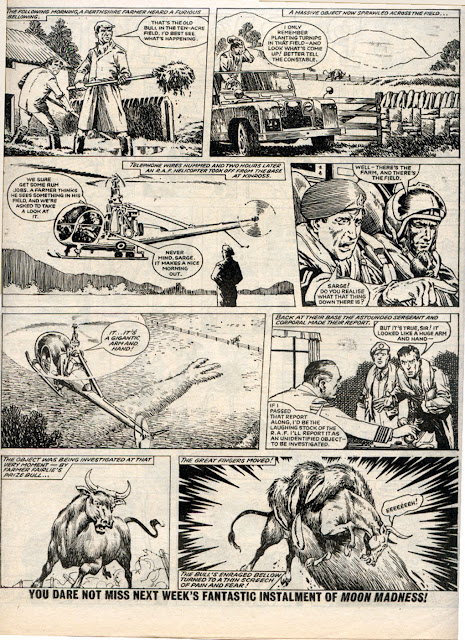 With this being the 40th anniversary of the Moon landing I thought it would be appropriate to look back at one of the strangest adventure strips to appear in British comics. Moon Madness from Smash! in 1966.

Issue No.9 of Odhams' new weekly (dated 2nd April 1966) boasted a slight increase in pages and a couple of new strips, one was The Legend Testers (which I'll cover in a future blog) and the other was Moon Madness, illustrated by Brian Lewis, a superb artist already known for his work at Fleetway. The Odhams adventure strips were often a bit quirky, but Moon Madness would prove to be completely barmy!

The story began with the announcement that "Russians Land on Moon". Not a Cosmonaut though; just a space probe. Clearly based on the actual spacecraft Luna-9, which the Russians had successfully landed on the Moon on January 31st 1966. As it "transmits energy" to Earth, dogs and cats across the UK begin to howl and screech, a portent of things to come. Next day, a strange raised shape appears in a farmer's field in Perthshire, taking the form of a giant arm. Before long the arm springs to life and crushes the life out of a bull with its mighty clawed fingers.

Chapter two, the following week, saw the arm pulling itself across the countryside and smashing a village in its path. This episode also introduced us to Professor John Silverlight, who escapes the clutches of the arm and would eventually become the hero of the story. The chapter ends with a discovery on Salisbury Plain, - this time a pair of giant hairy legs "that seemed to have stepped straight from a nightmare"! 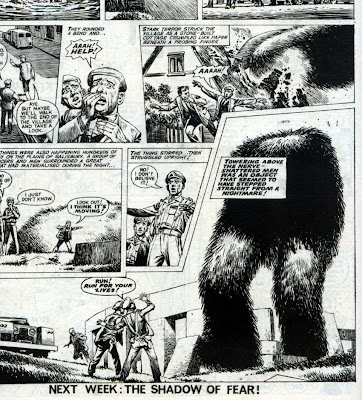 Who knows what Brian Lewis made of these scripts? He clearly gave his all to the artwork so one assumes he probably loved the craziness of the concept. The detail Lewis put into the pages was wonderful and it certainly came across as the work of someone who enjoyed what he was doing. A regular on Smash!, Brian Lewis was also the artist of Space Jinx and on many episodes of Charlie's Choice, proving he could also handle humour strips with ease and without any of the awkwardness that is sometimes evident when adventure artists try to do more cartoony material. He truly was one of the greatest artists of British comics and it's a tragedy he died so young, at just 49 in 1978. 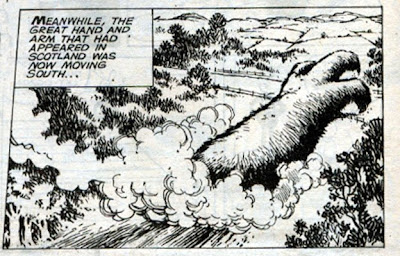 With chapter three, the arm scuttled towards England, confronted by the army on the Forth Bridge who were unable to stop it. Meanwhile, an earnest caption tells us "The giant legs were striding across the Hampshire countryside!". 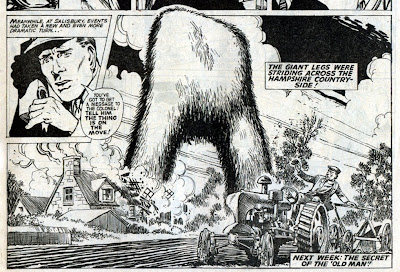 With chapter four the air force are brought in to tackle the rampaging thing. "Our orders are to attack those legs - and utterly destroy them!" barks a pilot in all seriousness. 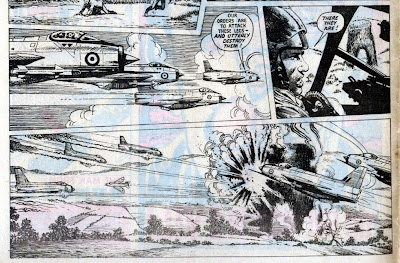 The attack proves futile. "We might just as well have been using pea-shooters" says another pilot. Meanwhile, John Silverlight, who seems to have developed a mental connection with the creature, wakes from his delirium in hospital and cries "The Old Man! Go to the top of the Old Man!" The military have realised the arm and legs are heading in one direction, towards the Lake District and a mountain called The Old Man.

Chapter five shows what lies on the summit of the mountain; a torso and another arm! "It - it's unbelievable!" gasps a military officer, as though the preceding hours had been normal. The legs arrive, join with the torso and arm, and retrieve the other arm as it approaches. Now the creature was complete, except for its head. 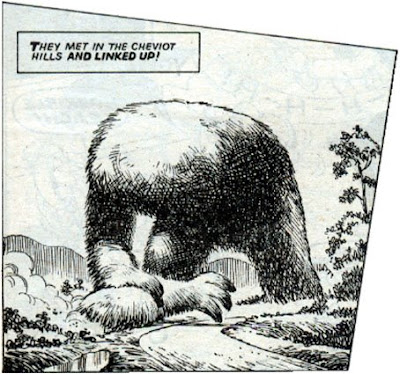 Chapter six has the creature continue its path of destruction, trampling villages under its feet. Following its progress, John Silverlight sees it walk into the sea and submerge itself beneath the water. Three days later Whitehall decides the menace is dead, but Silverlight has a different opinion: "Don't you see - that thing has walked into the sea for only one reason... it's seeking its head on the bed of the sea!"

True enough, two weeks later, a mighty hand reaches up out of the North Sea sinking a trawler, and the creature emerges... complete with head! 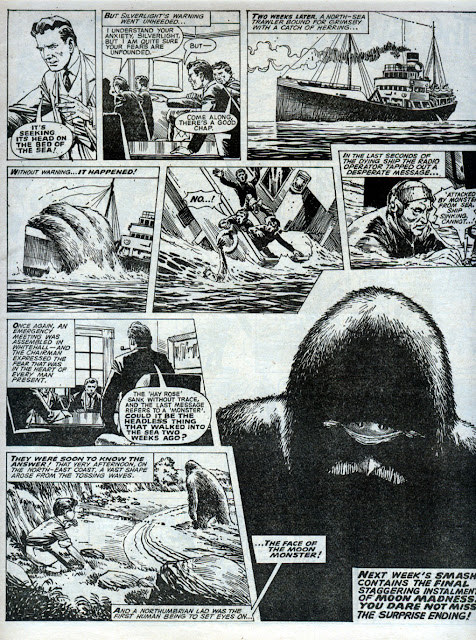 That chapter promised us a surprise ending... one we received the following week in Smash! No.15, although kids who may have been expecting a big battle scene would be disappointed as the conclusion was quite low key. Suddenly we were expected to feel sympathy for the creature which we're told is "alone amid a bewildered terrified mankind which prayed for its destruction" and that it's "like a lost and frightened child seeking help".

John Silverlight confronts the creature, having formed a bond with it because (we're now told) the monster's spiky fur punctured his skin. Silverlight senses that the creature came here via electronic impulses so he finds a way to send it back to the Moon. Leading the now-passive creature to a telegraphy station, the process begins to make the monster vanish, as it breaks down into radio waves and is transmitted back to its Lunar home.

Curiously, the strip ends on a teaser. With his blood stream tainted by the creature's fur, we're informed that Professor Silverlight now has a connection with the Moon. "One day," states the final caption, "the strange, almost unbelievable story of Silverlight the Moon Man may be told. And if told it is, it will be in the pages of Smash!" 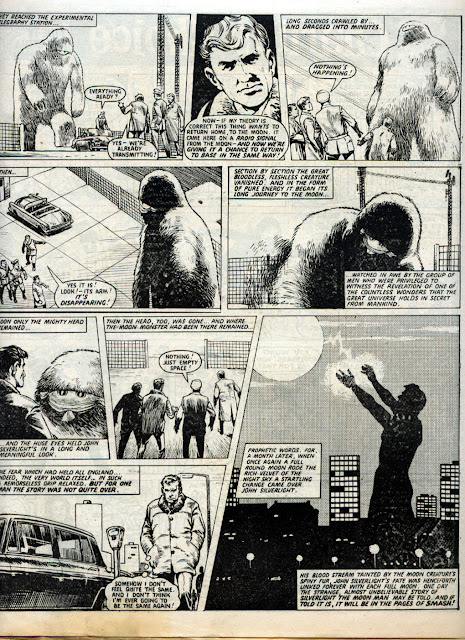 However, that's the last we heard of the character. If a series of Silverlight the Moon Man was ever on the cards it doesn't seem to have developed any further than that brief mention. The following week Odhams introduced their first Marvel strip - The Hulk, which instantly delighted many of Smash's readers. 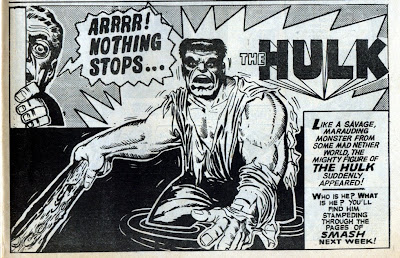 Over the last 43 years fans have fondly remembered Moon Madness, even though they often forget its title (referring to it more often than not as "the one about the giant arm and the legs"). The strip was written by the group editor of Odhams' comics Alf Wallace and I'm sure it was done tongue in cheek even though the tone was deadly serious. Even though the strip appeared for only seven weeks its concept was so uniquely outlandish, and Brian Lewis' artwork so powerful, that it made quite an impression amongst kids of the Sixties. 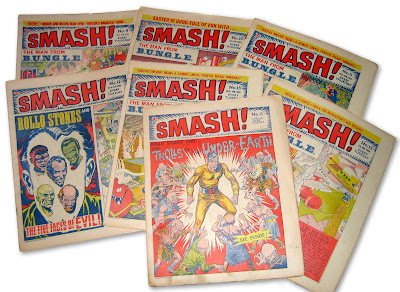 Great to see the Moon Madness..
now it makes me wonder what the part 2 of the story could be..

Maybe a kind of Werewolf story..

Its great when a story captures the imagination in a big way..a bit like The Goon in Popeye did..a creature that haunts the mind..

Great to see the Moon Madness..
now it makes me wonder what the part 2 of the story could be..

Maybe a kind of Werewolf story..

Its great when a story captures the imagination in a big way..a bit like The Goon in Popeye did..a creature that haunts the mind..

If I could use one word to sum up many of the strips that have been published in British comics, then the word "unique" would be the one I'd use.

Whether we're talking about a sheriff who happens to be an ape, a heroic great white shark or a rat-like burglar, British comics have always produced unique strips, the likes of which you won't see elsewhere - and "Moon Madness" would be one such strip.

Such tales are memorable, too. As Peter Gray said, it's great when a story captures the imagination in a big way.

The strip was written by the boss of the Odhams' group of comics, Alf Wallace. And - I hope you'll forgive the plug - Bear Alley Books is planning to reprint another Alf Wallace classic shortly, the title of which will be announced soon.

Many thanks for that info Steve. I've amended the article.

I'm way too young (38) to have read it but Moon Madness would have been right up my street!
The ending does sound like a bit of an anti-climax though. I would have gone for it getting blown to bits by some means only to have it start to re-assemble it's self.

Humm, actually I may use that myself.

It's always nice to take another look at Brian Lewis' artwork.

To my mind, he doesn't get anything like the credit he deserves.

You're right. Brian Lewis always delivered quality work. I particularly admired his ability to convincingly draw adventure AND humour strips. Methinks I'll run a post on some of his other work soon...

I thought for years that I was the only one to recall this incredible story! It had possibly the greatest effect on my imagination of perhaps `any` story I have read in any comic-perhaps only equalled (for me) by Marvels `Dr Strange` 1966-68.

"Moon Madness" was a truly unique strip. Sure, it doesn't stand up to logical scrutiny (even in 1966 the Moon was known to be uninhabited bar-possible microbes, certainly not a 400 foot Yeti-type!! But who cares? It was WONDERFUL fun! Alan (Ultron5) Smith.

It really stunned me back in 1966 and I couldn't stop dwelling on it for weeks after.

One of those wonderfully inventive little gems that are hidden in UK comics over the years! "Moon Madness" was WONDERFUL reading!

This story truly `haunted` me for years! It was the most incredible thing I had ever read in a comic to that date!

Even today, my memories flood back seeing those photo's.

Yes! It isen't too rooted in reality-even back in 1966, scientists would discount 400 ft Yeti-type creatures bieng able to survive on the moon!

But who cares? `Moon Madness` is a truly wonderful comic strip that captivated my Ten year old imagination back then! A gem!

looking forward to the blog on the Legend Testers. (Presumably in an untold story they visited the nineteen sixties and returned to the future with the pipe for their boss!)

I remember being thrilled by this as an eight-year old, even though I was left pretty puzzled by what the final panel was supposed to mean! This story is truly from another age - it's difficult now to remember a time before men had walked on the moon!