Free comics in The Guardian 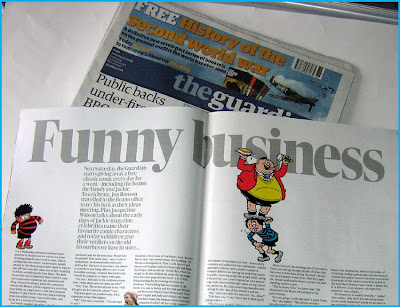 Starting next Saturday, 12th September, The Guardian newspaper will be giving away a reproduction of a classic British comic every day for a week. As there is no Sunday edition of the paper, The Observer will also be involved in the scheme on September 13th.

The classic reprints all come from the Egmont and D.C.Thomson stable of comics, and appear to be mostly 1980s editions. Kicking off with a copy of girls' comic Jackie next Saturday, followed by The Beano No.2000 (from 1980) on Sunday, the rest of the week will see copies of Roy of the Rovers, Bunty, Dandy, Tammy, and Whizzer and Chips presented with the paper. 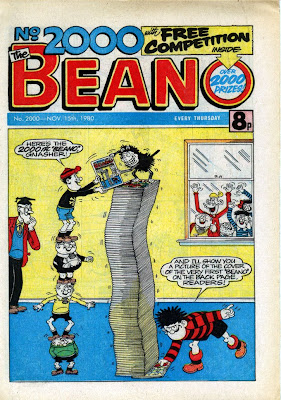 Although the free comics don't begin until next Saturday, today's edition of The Guardian begins their celebration of British comics with an article in the Guardian Weekend magazine supplement. The article, by Jon Ronson, tells of his visit to the offices of D.C. Thomson and his task of writing an episode of The Numskulls for The Beano. The nine page feature also includes the reactions of a few of today's kids to the classic comics The Guardian will be giving away. Quite pleasingly, they all seemed to enjoy the stories of yesteryear, which perhaps suggests that if such comics were revived in some form or another there might actually still be a market for them.

The articles can be read online at The Guardian website:
http://www.guardian.co.uk/books/2009/sep/05/funny-business-free-comics-jon-ronson

Monday Sept.14th will see The Guardian Media section run a feature on the recent nostalgia wave for comics (specifically the Egmont Classic Comics quarterly which will soon be publishing a Misty special) with interviews with Paul Gravett, myself, and others.

Whilst American comics and adult graphic novels are rightly praised by the media these days, the same respect is usually missing for children's British comics, as if producing entertainment instead of thought-provoking narratives is somehow less important. I'm about as far removed from being nationalistic as one could be, but we are in danger of forgetting the history of our own comics, which would be a huge loss because there has been some fantastic material produced over the last 100+ years. Will this week-long celebration of UK comics have a knock-on effect to give such comics greater respect? Will it stir publishers into testing the market with a new all-comic title for children? I'm not entirely optimistic but time will tell.

Speaking of UK comics turning up in surprising places, there's a four-page article on Sonic the Comic in this month's edition of GamesTM. Sadly it seems to gloss over most of your contributions to the comic, and a lot of it seems to be drawn from Google, but it's got an overall positive tone and has some interesting quotes. Ultimately it's nice to see a defunct British comic getting coverage in a gaming magazine!

Thanks Tom. Yeah I saw that and was bemused at how I'd been elbowed aside somewhat. History is written by the winners, - or at least by the people who wrongly thought it was a battle. ;-) Me, I was happy to share writing duties on the comic and I always understood that UK comics are a team effort, not dominated by one person. Amazed the old grudges are still there so many years later! Ha!

Thank you for the news, Mr. Stringer.

Right now, I am so pleased to see exposure being given to classic comics. I walk into WH Smiths and there's a Battle comic; I see collected editions of vintage comic strips; and now I am going to get a comic each day from The Guardian.

I hope we see vintage comics in the spotlight for years to come as free comics being given away by newspapers, as reprints, as collected editions, etc.

Grudges by fans, you mean? I guess that's the side effect of the comic being so, in your own words, schizophrenic. And of course simply being a comic. :-) Some people do insane things over perceived childhood wrongdoings - that Rob Liefeld convention guy, for instance. But in this case it seems more like an oversight (probably because Kitching's stuff has more coverage on the internet).

Maybe if you contact GamesTM to tell them your side of the story, they'll run another article about it ;-)

I was already interviewed for the article Tom. Not that you'd know it from the absence of quotes. ;-) So it goes. STC was a very enjoyable comic to work on, and I provided scripts for some great artists, and Debbie Tate (also ignored in the article) was a good editor to work for.

I had no idea because there wasn't a single quote from you. How appalling!

It's not a problem Tom. The author did say space was at a premium and not everyone got in. I'd have thought my seven years on the comic would have counted for a bit more than a passing mention but there's a corner of Sonic fandom that always preferred Nigel's writing to mine, and they are of course entitled to their opinions. STC was a long time ago now and I prefer to focus on current comics work.