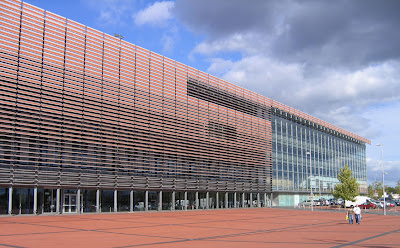 I enjoyed the British International Comics Show at Millennium Point (above) in Birmingham over the weekend. Company was good and weather was quite pleasant for October. I didn't have the chance to attend the panel discussions as I was busy on Egmont's Toxic table all weekend, so bearing that in mind, this isn't a review of the event, just a few photos inside the exhibitors' halls. That said, I didn't hear any bad things about the show, and there were a good variety of items on the bill so it seems to me that everyone had a fun weekend.

Here's the photos then, with captions underneath.... 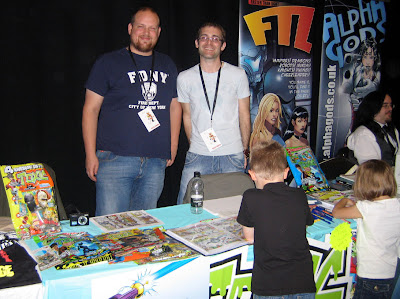 On the Toxic Table; Andy Davidson (editor) and Luke Paton (sub-editor / writer). Laura Howell and I joined them for a sketching session over the weekend which proved quite successful as numerous readers dropped by for a sketch. Good to meet the readers (two of whom are in the photo) and find that today's kids are still enthusiastic about comics. 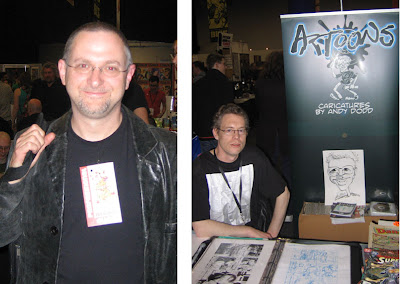 Above left: John Short, writer of Rex and Robin Hoodie for Toxic.
Above right: Andy Dodd, caricaturist and artist of various projects for Time Bomb Comics. 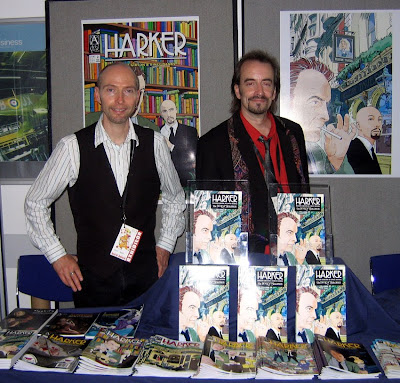 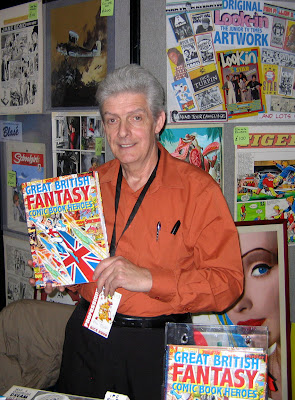 Creator of The Cloak and Moonbird, Mike Higgs displays his latest work: a huge 464 page hardback collection of classic British superhero strips from the 1950s! Great British Fantasy Comic Book Heroes is a very limited collectors' edition that you can purchase by reading the details on the flyer reproduced below: 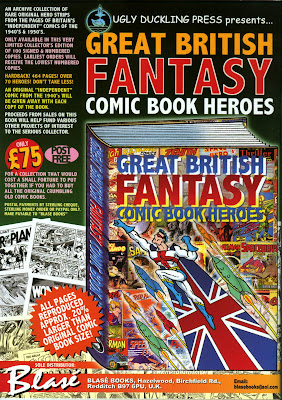 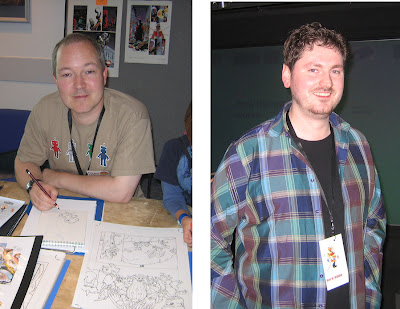 Above left: Nigel Dobbyn, artist on such varied comics as Sonic the Comic, The Beano, 2000AD and Spider-Man and Friends sketches for the readers. Fans of his version of Billy the Cat will be pleased to hear that he's produced another strip featuring the superhero for the Beano Annual 2011, on sale in September 2010.
Above right: Writer Ben McCool makes a welcome return to British shores for BICS before returning to his New York home. 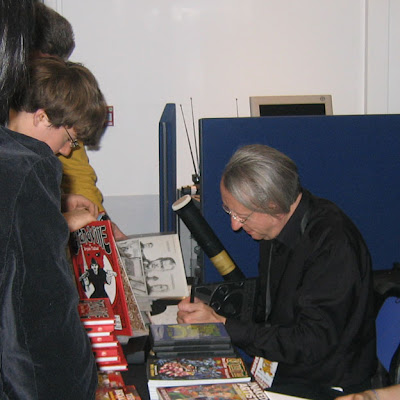 Bryan Talbot was busy all weekend signing copies of his new graphic novel Grandville. More info and details of the other dates on Bryan's signing tour here:
http://www.bryan-talbot.com/grandville/index.php#grandvilletourdates 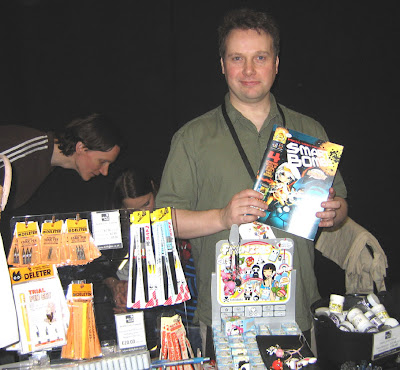 Wil Overton shows off a great new UK comic that he and his associates have produced: Smart Bomb! I'll be reviewing it here soon. Wil also runs dinkybox.co.uk a great online store that, amongst other things, sells art supplies that are ideal for comic artists, including the Deleter G Pen nib like wot I use. 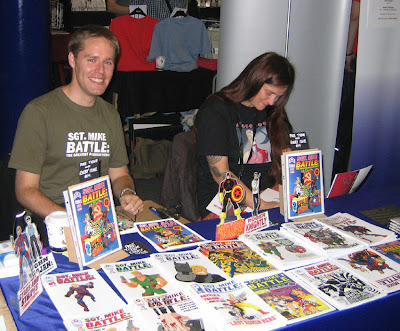 Graham Pearce with his ongoing small press comic Sgt. Mike Battle. This is a very funny humour comic that I recommend everyone should buy. I'll be reviewing the recent issues here soon (honest Graham!). http://www.sgtmikebattle.co.uk/

Sitting beside Graham is freelance artist Vicky Stonebridge who co-organises the Hi-Ex comic event in Inverness. 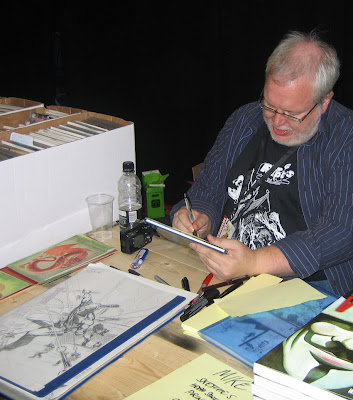 Finally, a few quick snaps taken around the halls during the weekend... 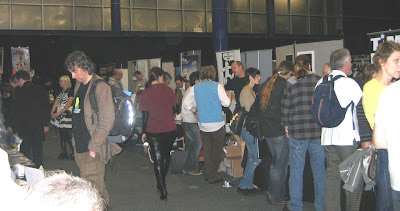 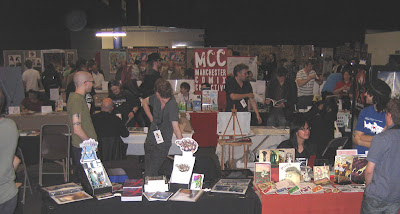 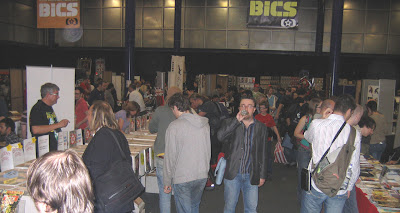 Thanks to James Hodgkins and Shane Chebsey for another enjoyable comics show. You do the industry proud, lads, and your hard work is always appreciated.
http://www.thecomicsshow.co.uk/

Cheers for the mention Lew - sorry I didn't get to see much of you. Enjoyed the show too, though I ended up blistering both elbows (not used to having a table to sketch at!) There's a Billy strip by me in this year's annual also.

Thanks for the mention Lew. Enjoyed the weekend, but like you didn't get to see anything other than a brief wander about. Met some nice people though and blistered both my elbows from sketching constantly on Saturday! There's also a Billy strip by me in this year's Beano Annual, out now.

Smart Bomb seemed like a really impressive effort, although a little too concentrated on video games for my liking. My friend Dave loved it though.

I think Wil said the video games were made up, so it's a kind of spoof of a video game comic in a way. Not that I knew. The last video game I played was Sonic and I only played that for reference when I was writing the comic. :)

Yeah they were all made up, but it was clearly drew a lot of inspiration from the many tropes of video games. Dave actually excitedly oversold it to me as "this generation's STC!" - so naturally it could never live up to those expectations. ;-) I felt the first strip was a bit overwritten, the second a bit underwritten, and the third a bit too gory for my liking - but the art was universally excellent and I expect this is a comic that kids can enjoy (even if I can't!).

I picked up Smart Bomb because of Wil Overton's artwork (amazing colour sense), but enjoyed the whole issue. I've never played a video game in my life, not even when I was working on Sonic, but I still really enjoyed the comic, particularly Philip Jackson's smart little tale. Very funny letters page, too.

Thanks for the kind words Lew. Glad you had a good time at the show.