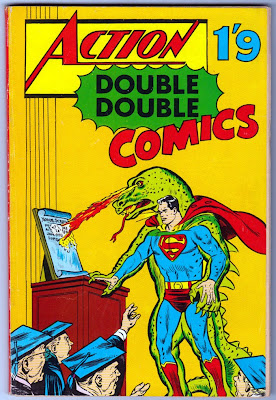 If you're under the age of 40 you may never have heard of them, as I believe Double Double Comics were only around from about 1967 to 1970. What were these curious items? Well, in the 1960s unsold copies of American comics were returned to the British distributor, Thorpe & Porter, who repackaged them into giant size "Double Double Comics", so called because they consisted of four individual 32 page comics in one 128 page edition. 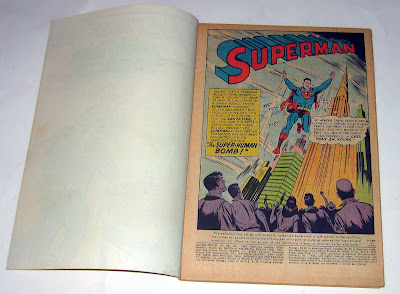 The repackaged giants included four full comics, including advertisements and letters pages, but minus their original covers. New covers were bodged together (often having little relation to the stories inside) and the same artwork appeared on the front and rear covers. The interior covers were left blank. 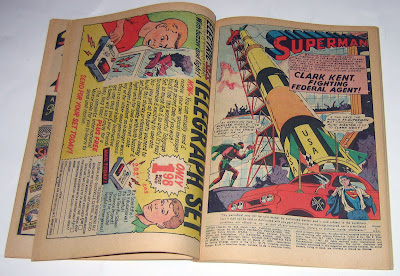 If that wasn't weird enough, the contents of the Double Double Comics could be different even if they had the same cover! It all depended on what spare comics they had to bind together. For example, my copy of Action Double Double Comics includes Action Comics Nos.342, 344, and 348 plus Showcase No.63, but someone else's copy (as reported here) includes Action Comics Nos.342, 343, GI Combat No.117 and Inferior Five No.2. 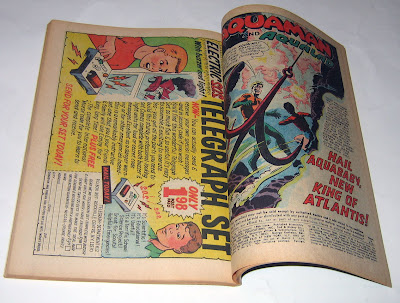 Each Double Double Comic usually bound four DC Comics together, but I remember that sometimes the occasional Marvel title was included too. (I recall a Gene Colan Daredevil in one issue, alongside three DC Comics.) The drawback was that you might already have one or two of the comics in the selection, or there might be one comic in there you didn't like. Basically it was pot luck, but we couldn't complain. Back then four American comics would cost a shilling (5p) each but Double Double Comics were only 1/9d (9p). 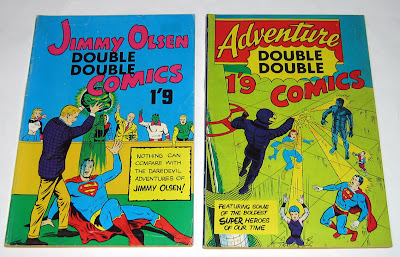 Marvel UK tried a similar idea in the late 1970s with three softback books that bound together several unsold weekly comics, including their covers. However it's the Double Double Comics that seem to have become quite collectible. (Speaking of which, and vested interest declared, I currently have a couple up on eBay here and here if you're interested.) 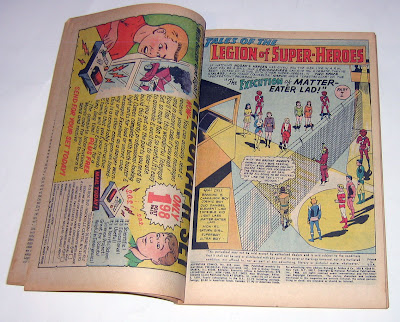 I'm not sure how well the Double Double Comics sold in the 1960s. Perhaps repackaging the comics was more trouble than it was worth. They were nice value for money books though, and I'm surprised more publishers haven't attempted something similar in recent times. 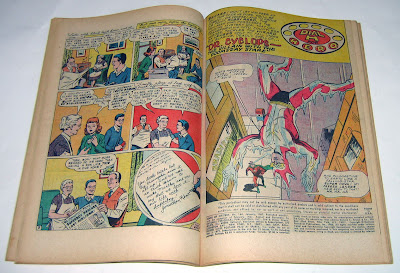 Marvel comics were included regularly up here. One Double Double I had contained two Romita/Heck/Esposito Spiderman, a Superman or Action and a Tales to Astonish - I also had one with two Colan Daredevils, the Dr Doom ones. As you say, a real bargain.Sometimes there would be a true gem, and one edition I recall fondly was a Blackhawks/Strange Tales/Brave and the Bold/Millie the Model.
Perhaps they were halted once the original publishers agents spotted that these were being sold without their original covers despite the warning printed on the indica that they must not be sold without them!

Yes, I had one featuring the Colan DD with Dr. Doom too. I seem to recall that some of the Double Double Comics had FIVE comics bound together rather than four, but I may be mistaken.

I used to pull the issues apart so I'd have four or five coverless comics, then throw away the ones I didn't want. Of course the comics never separated properly, so you'd be left with loose or torn pages.

I think you make a good point about publishers possibly stopping T&P from continuing with the practice of repackaging.

What you didn't want to find among your Double Double random contents was a story that was 'continued next issue'. In those days the chances of getting hold of the following episode were slim, even for comics that were 'current', let alone returns that were months out of date.

I love how today it's always "standard practice" to show everything and keep "wall of text" captions to a minimum... and then what do we see in these comics from the 'good old days'? Wall of text captions and stories that rattle along at a breathless pace leaping from one scene to the next!

Oh thanks Lew - I thought it was only me which remembered these gems! I would have been 8 or so so loved them!

There was also another repackaging stunt, which involved the creation of "pseudo annuals" by binding together six (I think) copies of one DC title, trimming the edges so that all the bound copies would look all nice and neat and then wrapping a hardback cover with an appropriate hardcover cover based on one of the DC covers in the batch.

These did include the covers and provided another opportunity to fill out the gaps in one's collection.

I remember the seemed to appear in Woolworths in the run up to Christmas 1967.

Still get superboy one somewhere got flash and earth one earth two green lantern story. plus jimmy olsen pretending to be robin the boy wonder

I know this is old but I came across it while searching for something else (information on The Secret Three). The notice about selling comics without covers was to prevent a newsstand stripping the cover off a periodical, returning it for credit and then selling the coverless comic. In this case it was a publisher repackaging them so there was no legal problem. I have a couple of smiliar items from a Canadian publisher, one of which is titled Big Easter Gift Comics. I also have a similiar item which contains four pulp magazines, including an issue Weird Tales. I suspect the process was more trouble than it was worth which is why they stopped it.

I have one of those 'pseudo annuals' with a phony Green Lantern cover and strips of rows of character faces featuring one unknown one which has troubled me since the late 60s!

Pity you are not able to picture of the cover. Someone might be able to identify him or her for you.