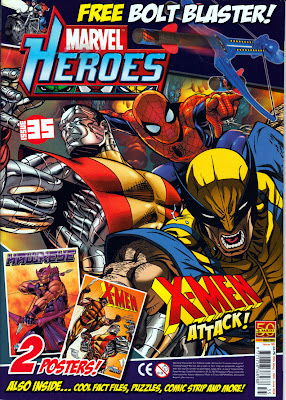 As you may have already heard elsewhere, Panini UK will no longer be allowed to produce new material featuring Marvel characters. This is a decision made by Disney, who acquired Marvel in 2009.

At first glance this seems like a poor business decision. For the past several years Panini have been commissioning brand new strips for their boys adventure comics Marvel Heroes and Spectacular Spider-Man. Each story was approved by Marvel US, the comics have proven to be very popular, the strips are kid-friendly, have introduced many new readers to the Marvel universe, and it created material that Disney could export to other territories if they'd wished.

However it seems that Disney now only want Marvel strips to be produced in America which will then be exported for various homogeneous international editions. (Pretty much as already happens with the standard Marvel material that Panini use in their 76 page Collectors Editions.) I guess this cuts out the middle man and gives Disney more control but it may also present problems. Readers of Marvel Heroes and Spectacular Spider-Man are accustomed to a writing style tailored for children, in strips that vary from 7 to 11 pages in length. Will the Disney/Marvel material fit the same specifics or will Panini find they have to run 22 page stories or chop them up into shorter episodes they were never designed for?

Of course the worst aspect of this is the loss of work for many UK freelancers who were contributing to those titles. People like Ferg Handley, Andie Tong, Jon Haward, Mike Collins, Simon Williams, John McCrea, Gary Erskine, David Roach, Lee Townsend and many more. Bear in mind that Marvel Heroes and Spectacular Spider-Man were the only two boys adventure comics left in the UK other than DC Thomson's Commando and one realizes that this is a major blow to British comics. (One can only hope that Strip Magazine in October and The Phoenix next year can turn things around.) 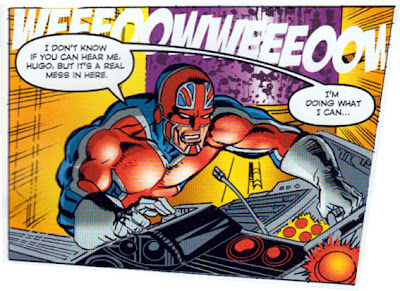 The issue of Marvel Heroes (No.36) out now is the last one to feature UK originated material. The end of an era is appropriately marked with a Captain Britain/Captain America team up by Ferg Handley and Mike Collins. (Mike having worked on the first UK originated Spider-Man strip in Marvel UK's Spider-Man Nos.607-610 in 1984.) 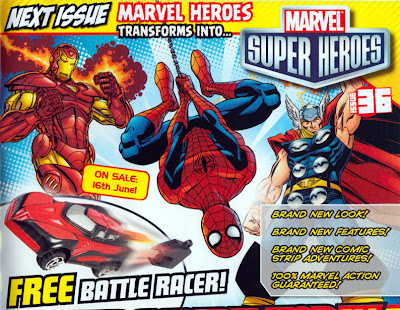 Next month, Marvel Heroes changes its title to Marvel Super-Heroes but continues the numbering. The ad promises "Brand new comic strip adventures". New to the UK that is, but not originated here.

All is not lost though. Panini UK have licenses to properties other than Marvel, and new strip material will continue in Doctor Who Magazine and no doubt we'll eventually see new non-Marvel titles too. They're down but not out.

Very much end of an era.

It was nice to see the original Death's Head in its pages recently, drawn by Simon Williams (a dream come true for him), and written by the great Simon Furman. One thing that will be a knock-on effect; as fewer adventure comics are available on newsstands, young budding artists may not get their spandex-wearing muse to inspire them, to emulate artists they discover. I was lucky to grow up during the 80s, and discovered comics that were abundant, buying everything from Victor to Buster (with The Leopard of Lyme St), Transformers to Secret Wars. It was in Transformers that I found the work of the likes of Geoff Senior, Lee Sullivan, Will Simpson and ultimately Andy Wildman, all of whom I tried to emulate at one time or another as I developed my own style. Though I never became a professional comic artist, I do publish my comic, Destinauts, online as a hobby (click on my name to find it, plug). Had it not been for the many adventure comics available to me at a time when comic shops weren't prevalent, I would probably have never been inspired to draw, something I developed over time, and still love doing.

As much as I enjoyed reading US reprints, they never quite inspired me as much as British material.

No "Great news, chums!" on the cover? For shame.

Mike, that's because it's just a rebrand. But I'd heard from Tony Ingram that Marvel Heroes was ending completely, so that's actually good news that it's only changing its format.

From what I've read on some sites I think some people have misunderstood the situation and they think Panini UK is shutting down completely. This is not the case.

The comic isn't even changing its format as such, just its title. It'll still be produced by Panini UK and with the same editor. It's just that the strip content will now originate in the USA and be sent to Panini UK to use.