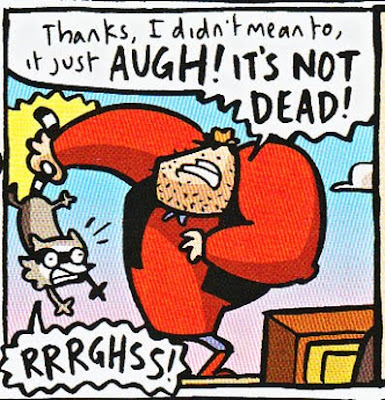 "Inevitably, sensing blood, the parasites have come out. Sensing a wounded animal they’ve pounced, picking at it from a safe cowering distance. In this canyon of the internet, the wretched scabby vultures don’t waste a second."

So speaks Jamie Smart, current artist of Desperate Dan and author/illustrator of the Find Chaffy book, in his scathing comments about certain critics of The Dandy.

Clearly tired of the "whiney criticism" he's read online, Jamie is now expressing his own opinion of the critics. Let's see how they like them apples.

"I’ve seen the attacks on the other artists, some of them brutal, and it’s nothing but childish jealousy" says Jamie. "Forums and blogs, suddenly filled with the barely-concealed glee of a thousand old, bitter, failed cartoonists who declare they KNEW it wouldn’t work. I say they’re failed cartoonists because you can usually follow the trail of bun crumbs back to their own portfolios, as they’ve clearly tried to infiltrate the world of children’s comics but obviously never quite made it. Instead of crying salty tears into their own pisspoor efforts, they bitch and whine their stupid opinions online, content that there’ll always be some other bitter tit who feels the same."

I couldn't have put it better myself.

I think Jamie is one of the best things to have happened to modern fun comics, and have praised and stood up for his work several times in different places, sometimes in the face of harsh criticism from others (while some *also* thought he was great); a very funny writer as well as artist, and so original.

But I don't agree that this rant was a good idea or "well said" at all.

The idea that the Dandy's online critics are all bitter old failed cartoonists is simply preposterous, and doesn't being a public spokesman for a young children's comic require a bit of decorum and care in what you say?

There's not much point saying "oi, critics - stop! having! opinions!" anyway, because they won't, but might a parent not come across this, one of the comic's main creatives venting off about the "pisspoor efforts" of "bitter tits" "whining like a bitch" (I suppose this is used generally now by some, but it still comes across as an ugly sexist term), and their "bullshit swipes" etc. and decide they don't want their children reading the comic any more? Doesn't it risk doing more harm than good for the title?

Hopefully it won't, and Jamie will continue doing more good stuff for it.

I think Jamie had simply had enough of certain critics. True, some critiques had been well reasoned, but others hadn't. And some were from resentful failed comickers with an axe to grind.

Constructive criticism can't be faulted, but when certain people get vicious and personal... well, why should we stand for it?

Jamie's response is quite harsh, but perhaps some critics deserved a dose of their own medicine.

Sometimes the best response in no response at all Lew. There are (as you know) a lot of saddo so called comic fans out there that are "getting off" on the Dandy's (supposed)failings and a lot I agree have been "vicious" but there comments are nothing more that fanboy rantings that are not thought out and most folk clock this. I know a few folk have made indirect (and direct) swipes at Jamies (amazing) style saying its childish etc and for an artist I would imagine that is hard to take, but come on the guys a comic star and they're just jealous, ignore them Jamie. The Dandy's woes run much deeper than the current art styles which IMHO are pretty high. I don't disagree with Jamies comments or his right to reply to these numpty's, but I would have targeted (as much as possible) the folk that are the culprits more or even better he should have let loose " UBU BUBU on them - MCScotty

"Sometimes the best response in no response at all Lew."

Possibly. Although after Jamie posted his comment his point was soon proven completely by certain vindictive responses. On a more positive note, it also brought forth some people with reasoned critiques and others who declared how much they liked The Dandy.

I have always found that the best way to kill a troll is to starve it.

In theory yes, but it depends how obsessed it is.

I see you've enraged your mega-fan with your latest blog post, Lew (you know the bloke to whom I refer!)

Interesting that in the comments, one 'Mr. Straightman' whines 'I don't really wish to stir this even further'....before going on to stir things further by moaning about how one artist, disappointed to see that some people had set up a vile, obnoxious hate page against him, tweeted the fact to his followers, and some of them waded onto the page to point out (in quite strong terms, sometimes, admittedly) how horrible such an undertaking was.

Of course, some of the most disgusting comments were on that site before the artist in question became aware, all hurling terrible levels of abuse at this artist. Some of these were by a truly horrid little man called 'Jimmy Vespa'. Who could pen such vitriolic words under such a pseudonym?

Step forward....Mr. Straightman (who, in turn, is actually another cartoonist, I believe, who has long railed against The Dandy's changes). Astonishing.

I think that with that, these people should no longer have their opinions considered one jot, if that's what they're willing to stoop to just to make some sort of muddied, furious point.

Too bad that Jamie closed his old blog and his response is gone now. The best way to get rid of trolls is NOT to ignore them but to report them to the police. Expose them publicly and have them charged for their hate crimes. This is the way the world is going.

Certain critics of Dandy deserved a harsh response. Their attacks were horribly personal.