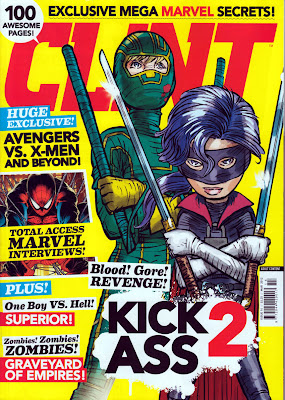 CLiNT No.14 isn't on sale until February 16th but here's a glimpse at it in advance, courtesy of Titan Magazines.

The last few issues have seen the mag jettison the weaker material (eg: humourous articles that never really worked), scrap the celebrity photo covers (no more beardy Frankie Boyle staring out at you) and focus on comic strips and related features. It's a massive improvement and CLiNT really holds together much better now.

Issue 14 really delivers the goods. There's a full 25 pages of Kick-Ass 2 by Mark Millar, John Romita Jr and Tom Palmer, 23 pages of Superior by Millar, Leinil Yu and Gerry Alanguilan, 25 pages of Graveyard of Empires by Mark Sable and Paul Azeceta, and a massive 12 page interview with Joe Quesada, Axel Alonso, and Tom Brevoort on the future of Marvel Comics. 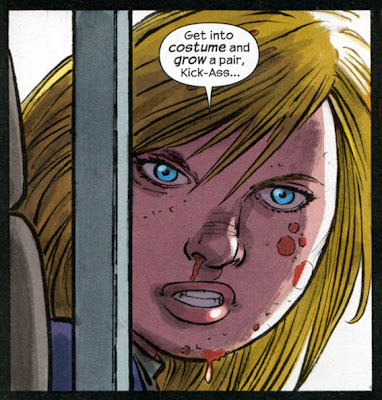 No Rex Royd this issue, which I have mixed feelings about although I was beginning to warm to the strip. (The episode in the previous issue was quite layered and intriguing. I just wish it was easier to follow.) Apparently issue 15 will give us a double length episode to compensate.

For me, Kick Ass 2 and Superior are still the strongest strips in CLiNT and I'll be sorry to see them end in issue 15. The hyper-violence tinged with black comedy perfectly suits what CLiNT is all about. That shouldn't be too surprising as Mark Millar is both the author of those strips and editor of the comic. The strips really pile on the destruction in these penultimate chapters with Millar and his artists really understanding the beat of producing exciting modern adventure stories. 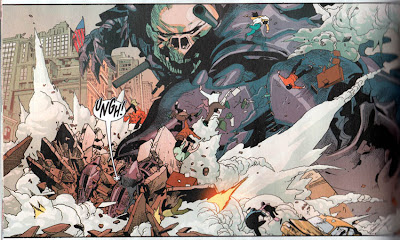 I know the hyper-violence and bad language of CLiNT isn't to the tastes of some readers, and that's fair enough. My personal feeling is that if one can enjoy a variety of TV shows from Doctor Who to Spartacus: Blood and Sand, or a variety of music from Glenn Miller to the Sex Pistols, one might also appreciate a variety of comics from Commando to CLiNT. There's room for everything.

In the meantime, CLiNT No.13 is still on sale if you're lucky, featuring all the above-mentioned strips plus interviews with various comics pros including Garth Ennis. Here's the cover by Brian Hitch: 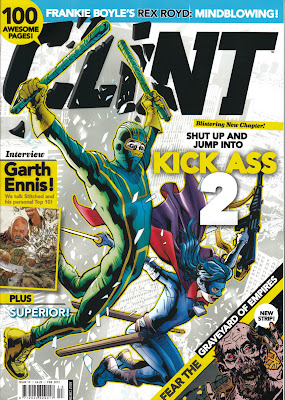 A shame that they had to use such a peurile name - would have thought that female readers would have been put off, and there would probably be a few parents who wouldn't want to see their kids carting round a magazine with that emblazoned across the front. Still, I guess they know what they are doing - but then, so did the US comic industry when they eschewed the use of the word "FLICK" because of the potential embarrassment.

Surely Clint is just a name, as was Diana, Jackie, Victor or Spike? ;-)

I doubt parents would see it as any underage readers would probably keep such a violent, profanity-strewn comic hidden, to only share with their mates in the playground. I assume most of CLiNT's readers are well over 18.

I'm surprised that Kick-Ass hadn't had its name changed to "Kick-Arse" for British readers...