Her name is Savage! 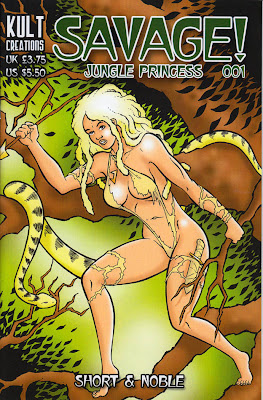 The latest publication from British independent publisher Kult Creations is Savage! Jungle Princess, a 24 page full colour comic book for £3.75 ($5.50 in the USA).

Written by John A. Short and illustrated by Gabrielle Noble, Savage! Jungle Princess is a fun cheesecake romp that includes Nazis, dinosaurs, and scantily dressed women. Whilst certainly not suitable for a young Beano reader it still retains a coyness to the amount of flesh on show and is actually less revealing than the old Jane newspaper strip. 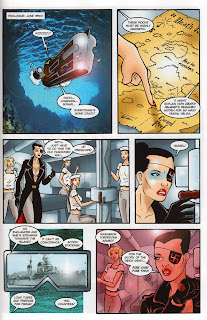 Short and Noble also collaborate on Ms. Fortune for Mayfair magazine but don't expect any soft core (or even hardcore) shenanigans in Savage! This is closer in spirit to the pre-code 1950s jungle comics of Sheena and suchlike, albeit with skimpier costumes for more modern tastes.

The story in issue one, Death Island, is self contained, so no worries about long cliffhangers until issue 2 arrives. John Short is an experienced professional writer and the story moves along at a good pace, with dialogue and captions containing the right amount of information to carry the story clearly. Gabrielle Noble's artwork also proves her worth as a storyteller, complimenting the script well. 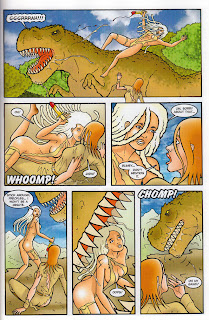 No doubt some will find this type of comic exploitative of women, although it does actually feature strong, independent women (albeit nearly naked). However, I'm sure that most readers will see it for the lightweight escapist fun it's intended to be, rather than a wish-dream of how women should look.

To find out more about Savage! Jungle Princess and to purchase a copy visit the Kult Creations blog here:
http://kultcreations.blogspot.co.uk/
Posted by Lew Stringer at 23:37

hi lew,
i have been reading your blog over 1 year now, thanks for the insight into the british comics world past (and present).
i always read your writeup on new publications and
i just suddenly realised the last comic i got excited about was the usa kitchen sink's "xenozoic tales" and that was over 25 years ago!
i really liked comics as a kid, i was probably the only kid who bought comics regularly from my school and i loved doing my own in those days, but then i got interested in animation and followed that path.
so did you ever consider another field, such as writing for radio or tv, or was comics the only option?
maybe if i had worked in the comics industry i would have enthusiasm for new comics (i guess i just have a nostalgia for old stuff).
thanks for reading

I always wanted to work in comics but the Midlands comprehensive school I attended tended to try and steer pupils towards a career in the army or factory work. So my ambitions got sidetracked for a few years while I worked as an office clerk in a local mining tools company.

However it wasn't for me so I eventually quit and re-focused on my ambitions to work in comics. Been a full time artist/writer since 1984 and never worked in other media or had any desire to. I'm easily pleased. :)

Ooh this looks like it might be worth a go. There was a few British "jungle girl"/"Mr not Tarzan hones" comics too, among all the wierdness of the late 40's. Wonder if this publisher will be at the MCM this weekend?

Sorry I won't be at MCM this weekend (I was too late to book a table) but you can always buy it on-lin at: http://kultcreations.blogspot.com