The Beano gets a boost 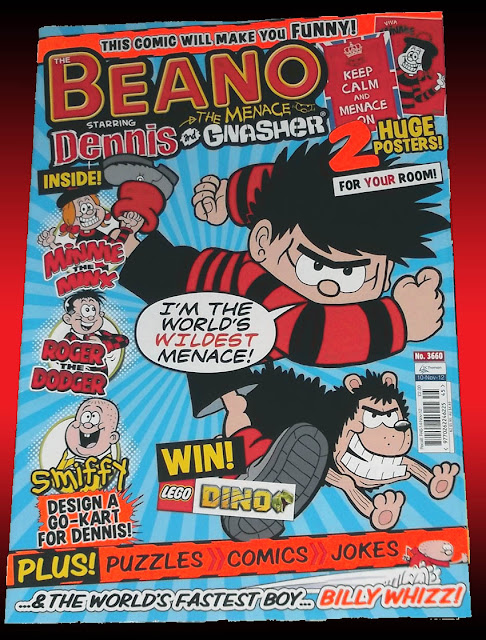 There's a few tweaks to The Beano starting from this week. Not a major revamp in the way The Dandy had two years ago but it still receives some substantial changes including the introduction of some new strips.

First up, the paper for the cover stock now has a high gloss finish like that used by Moshi Monsters magazine. There's also a price rice by 50p to £2.00. Whether or not either of these changes is permanent remains to be seen as the comic comes with a bound-in A2 size double-sided poster which isn't labelled as a gift. (There will also be a pull-out poster next week.)

Inside, the comic kicks off with a nice two page spread drawn by Nigel Parkinson which welcomes new readers to the fold. This is clearly a revamp intended to attract a new generation of readers, but it also contains a lot that should please existing Beano fans.

Billy Whizz has been given a retro-makeover with Wilbur Dawbarn as the new artist. Billy's tracksuit has been replaced by a red T-shirt and black short trousers. Yes, it's a return to the character's original 1960s look and it really works! A nice old-style strip but by a modern cartoonist. 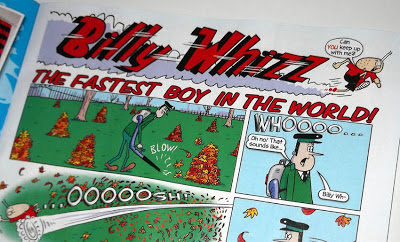 Calamity James is back, albeit as a reprint, with artwork by the great Tom Paterson. If that doesn't please older readers, nothing will. And I think new kids will get a kick out of it too.

Minnie the Minx and The Numskulls are now single page strips instead of two pagers, which tightens up the pace of the humour. (Numskulls is actually a reprint from a few years ago.)

Ratz is renamed Midnight Rat for the first of a two part story with the focus on a rodent superhero. With artwork by Hunt Emerson you can't go wrong.

The readers pages have received a retro-makeover by being re-named the Dennis the Menace Fan Club, albeit in name only. (No Gnasher badges, as yet at least.) 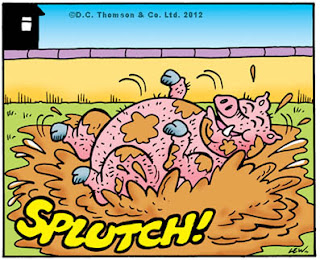 A very good issue although felt it was missing a silly twit and his time-travelling bed. Hope he's back next week...

The mini-strips were quite good. My favourite was Baby-Face Finlayson although I found Pup Parade, Little Plum, Gnash Gnews, Les Pretend and Rasher all rather good as well! Not too keen on Simply Smiffy and Winston which is a shame as both have potential and the original series of Simply Smiffy was brilliant!

Wilbur Dawbarn did a grand job with Billy Whizz though! Glad to see a nice nod-back to the past with the style and clothing!

A shame to see Minnie and The Numskulls go down to one page each though - even though I found both rather good.

I hope there'll be more to come - would like to see some more mini-strips in there!

Ooh, Les Pretend's back? That's good news. Reprints or new ones? I'm already sold on Calamity James, but I'll be buying it for Les as well.

@TwoHeadedBoy, All the mini-strips are brand new.

@Harry, perhaps Smiffy and Winston will appeal to you another week, depending on the gag?

I didn't even notice Fred's Bed was absent as the comic was so packed.

Fred's Bed is one of the highlights of the comic for me so it missing was a great shame but those 8 mini-strips make up for the absence! :)

I'll be honest Lew I didn't either until I read it on here but I doubt he'll be gone long as the strip as just been revamped.

As for the rest of The Beano there's one one word to describe it brilliant. As someone who started reading The Beano in the 90s I know my 8 year old self would have loved to buy a copy of The Beano in it's current form.

Great job on Rasher by the way Lew!!!

Thanks Gilly. More wallowing from Rasher to come!

@Harry, the Winston strip made me chuckle anyway. That's the thing about humour, - you can't please everyone with the same joke. :)

Check the small print on the subscription ad: "Saving based on increased cover price of £100.51" (my emphasis). So I think the price increase is permanent.

To be fair, though, the Dandy's already been two quid for a year and the Beano's held out at £1.50 for eighteen months now - and the best price-related thing they've done lately is finally scrap those annoying random one-off price increases, which made me far crosser than permanent ones ever have.

Well spotted, Martin. I must admit I didn't read that small print.

There's probably some marketing reason why it's risen to £2 instead of £1.99. Or perhaps it's all part of a plot to eliminate the 1p coin. :-)

I remember once hearing that if you can buy something with one coin (eg: £2 in this case) it stands a better chance of selling. Personally I don't think such psychology makes a lot of difference, but The Beano did well when it only cost a thruppenny bit. :-)

Oh, I'll keep an eye out for that - especially if Les Pretend's back! My daughter reads Moshi Monsters and I must confess that it's actually a fine looking little comic, so if the Beano's gone down that route, then that's all to the good.

I'm not disappointed to see the old style Billy Whizz but as my wife is a friend of Nick Brennan's, she'll be gutted he's moved on.

Thx for the heads up. I looked for the Billy strip straight away and yep - looking good. I did miss Freds Bed though.