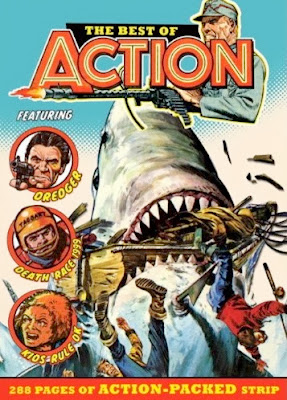 I noticed this book listed on Amazon yesterday: Uncensored Action (The Best of Action). Or just The Best of Action according to the cover. From the brief description it looks like this 288 page paperback from Titan Books will reprint some classic material from the pages of IPC's Action, the boy's comic that shocked a nation in 1976 with its portrayals of violence. The powers-that-be back in the day hated the comic and it was withdrawn several months after its launch, to return in a much toned down form weeks later.

According to the book cover shown above (which of course may be different when it's eventually published in August 2014) the contents will include the controversial Kids Rule O.K. This strip survived Action's relaunch but suffered the consequence of having panels censored and an ending that went against the grain of its original concept.


No doubt The Best of Action will also feature background details on the rise and fall of the comic. However, this isn't the first time that Titan Books have covered this fascinating saga. Back in 1990 they published Action: The Story of a Violent Comic by the social and media historian Martin Barker. This compelling book reprinted many of Action's strips - including the ones that never made it to the shelves, comparing the published versions with the original uncensored pages, accompanied by text and research by Professor Barker. Perhaps Titan's new book will be similar, but if you don't have a copy of Martin Barker's edition it's well worth tracking down on eBay or wherever to read about this interesting part of British comics history. 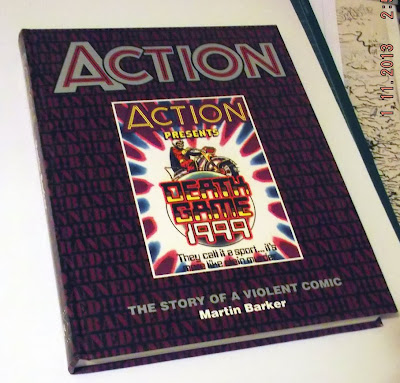 okay, not big on the comic (not my time) but.. I know the strip Death Game 1999 (bike racing, kinda based on Rollerball).. but that cover calls it Death Race 1999, probably trying to tie in with the old film?.. did it change it's name in the comic or what? any clue?

Well spotted. It's just a typo which I'm sure will be corrected on the published cover.

The strip was indeed called Death Game 1999. It was retitled to 'Spinball' when Action came back in its watered-down form.

When Action was absorbed by Battle, Spinball became The Spinball Wars, in which this high profile sports team was conscripted into the army and forced to carry out undercover missions.
Ah, comics; aren't they wonderful?

Thanks David. I'd lost interest in Action by the time it merged into Battle so I didn't read any Spinball Wars stories. (I didn't really get into reading Battle-Action until later, when they started running strips on the cover. The first Charley's War strip cover really grabbed my attention and I stuck with the comic then until it ended.)

I've never seen this book. Was it ever published? Was it published under a different title?