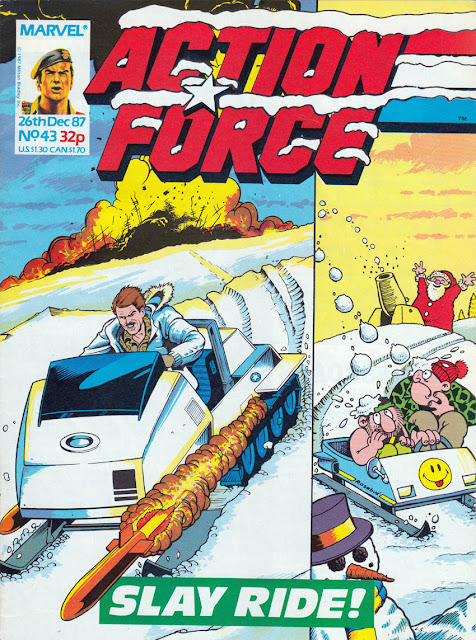 Marvel UK played such an important part in the careers of many British comic creators. Its editors gave opportunities to newcomers that some of the longer-established and more traditional publishers might have passed up on. Even better, in some cases, Marvel UK's page rate was higher than that of its rivals.

Comics such as Action Force gave work to a new generation of creators, most of whom had grown up fascinated by comics and were eager to work in the business. I include myself as one of those fortunate to have freelanced for Marvel UK at this time. Many of us got to know each other socially too, at comic marts and conventions, so a sense of community and cameradre developed on a scale that may have been missing amongst UK comics creators of earlier generations.

This Christmas issue of Action Force from 1987 features early work from several of us who are still active in comics today. The editor was Richard Starkings (now the creator of Elephantmen for Image Comics in the USA, and of the Comicraft font business) and for a bit of festive fun he wanted a split cover, with an Action Force scene on one side, and Combat Colin, in his one and only cover, on the other. (I'm sure I have the original art for this cover somewhere. Must try and find it.) 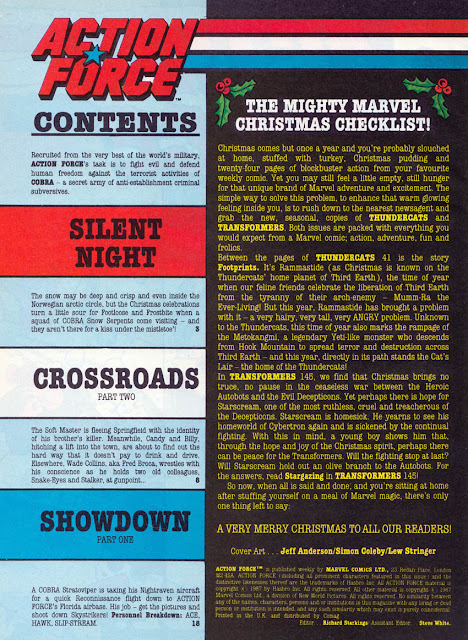 Based on a toy line, Action Force was basically G.I. Joe rebranded for the UK, but the comic did include some brand new material. For this seasonal complete story, Marvel UK staff writer Steve White provided the script, while a young Doug Braithwaite supplied the art. I think this may be Doug's first published work! It's inked by Simon Coleby, who recently drew the Jaegir series for 2000AD. This was Simon's first published work too. 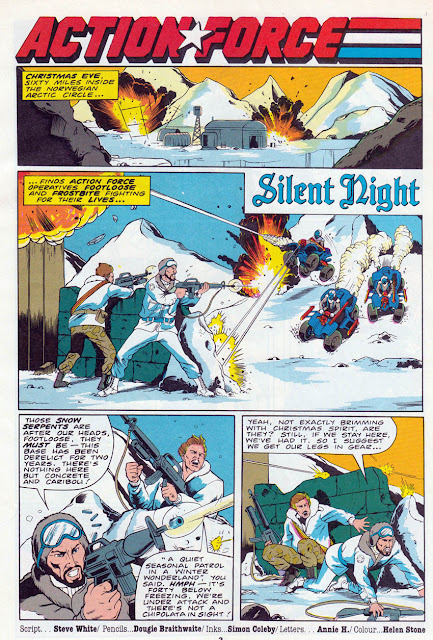 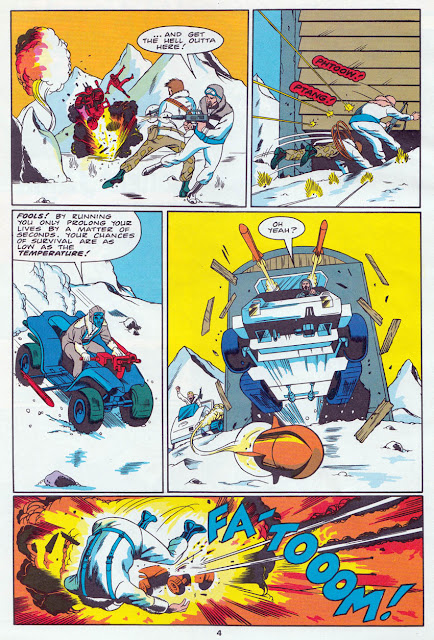 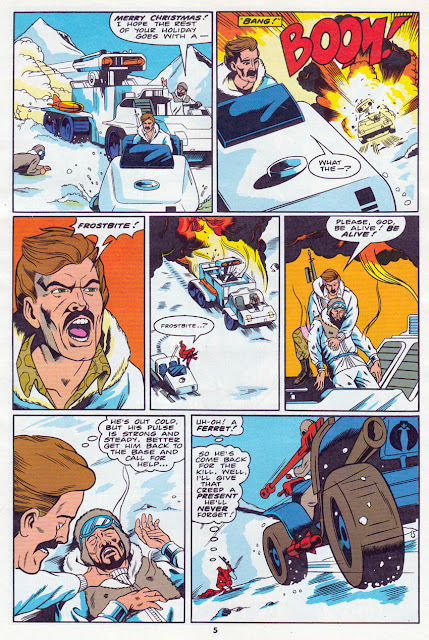 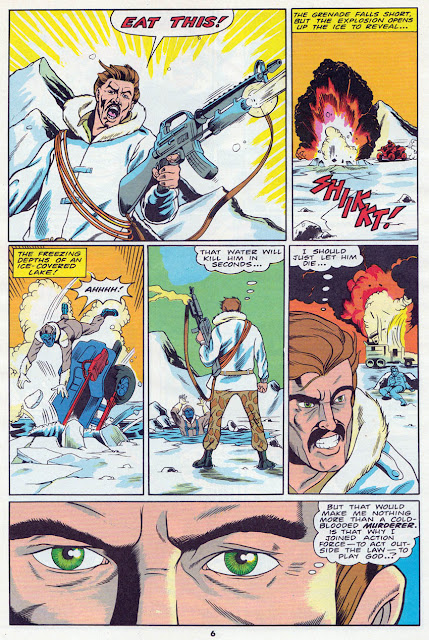 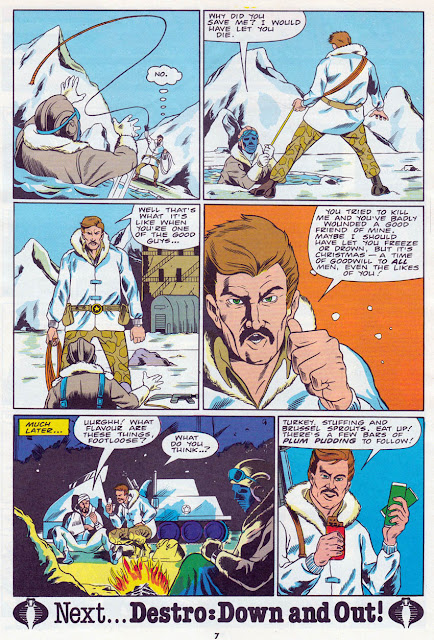 Doug's style has certainly developed over the years and he's now one of the best in the business. Here's an interview with him from a while back:
http://downthetubes.net/?p=16665

My Combat Colin strip had debuted in Action Force No.5 and by this 43rd issue I was getting into my stride with the character and developing the personalities of Colin and his assistant Semi-Automatic Steve (loosely based on Steve White, who coloured this episode). 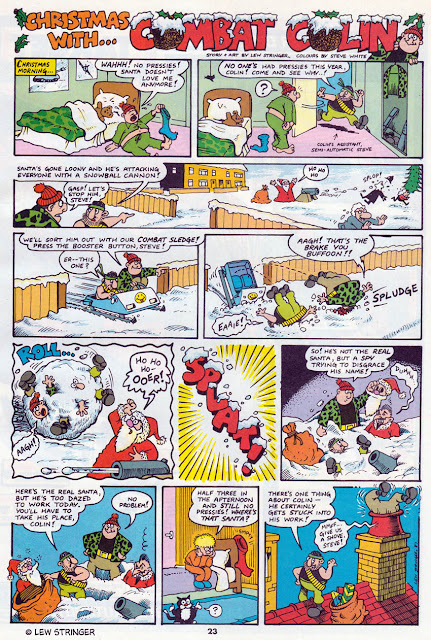 (For those who have asked; yes, I do still intend to publish a Combat Colin comic reprinting those old strips. I'm too busy at present but hope to find time early next year to put together the first issue.)

On the back page; an advert for one of the most popular toys of the period. Yes, it's The Transformers! 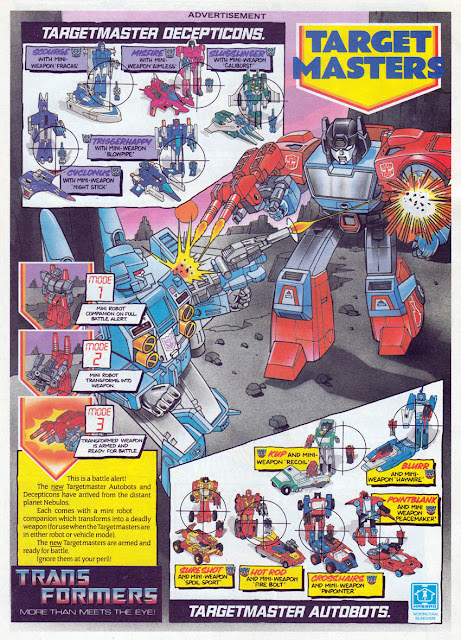 Looking back on this comic now it'd be a cliché (and incorrect) to say it doesn't feel like 29 years ago. It actually does feel like a very long time ago indeed, but I have happy memories of that period and I'm glad to say I'm still in touch with many of the people I met back then. It's also great to meet some of the readers now they're grown up and attending conventions, and hearing how much they enjoyed those old comics. Make Mine Marvel (UK)!

Another festive flashback soon!
Posted by Lew Stringer at 00:01

Love it. Still have a few issues of Action Force tucked away somewhere.

And of course no Christmas issue is complete without the obligatory snow on the logo.

Lots more Christmas comics to show over the next week or so, and plenty of snow on logos, so I hope you'll stick around!

quite the honour eh? an Action Force license comic which they allow 1/3rd of the cover to be used by a 1 pager back up strip? very impressive for the time. or even for these days when I think about it.

Yes, I was very pleased when Richard Starkings asked me to that. I very much doubt that licence holders would want a character not associated with their brand on the cover these days. In fact, I don't think any licensed comic has non-licensed strips in the mags now. Things were far more relaxed back then.

...and better for it back then too. I meet a lot of people at cons who tell me they stuck with The Transformers just to read Combat Colin, so evidently non-licensed strips do have appeal.

very much so, and the fact that Transformers Annuals which were.. kinda a let down cause it was the time when most stories were just reprints (even though they had the 'collected comics' range) had Combat Colin collections too just shows you how damn popular it was..

Always loved Christmas specials, I have a few of the old Transformers Cristmas covers framed I get out every December. Been posting some on my comic blog too. Can't wait for the Combat Colin collections when they come out, been hoping for them for years!

I've been intending to do them for years too. :) I'm not doing it as a big collection now as it'll take me too long to scan and prepare, and the price might put people off, so I'll be releasing it as 5 or 6 comics over a period of three years or so. That's the current plan anyway! 2017 is the 30th anniversary of Combat Colin so it's the appropriate time to launch it.

Whilst I know Christmas isn't quite the right time to be concerned with commerce Lew (though some might disagree...), I'd be interested in reading more about your comment: "in some cases, Marvel UK's page rate was higher than that of its rivals".

I'd always viewed Marvel UK as being a smaller company overall than IPC or DC Thomson, although I know a few of their comics such as Planet of the Apes were major hits. Was this actually the case and if so, how did the higher rate come about?

Obviously I'm not going to go into detail with someone posting anonymously but just to say that Marvel UK believed in paying freelancers a realistic rate, and that continues now they're owned by Panini.