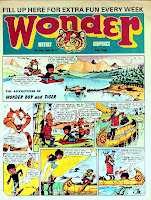 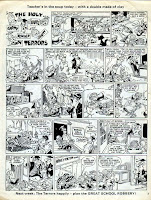 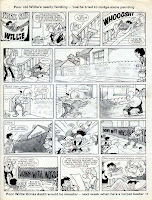 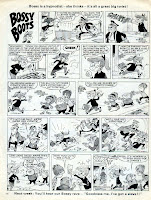 A curious item in the history of British comics is the weekly comic Wonder published in 1968/69. I first saw this title whilst visiting the Royal Show in 1968 as it was on sale at a stall there (presumably Esso's). Anticipating buying it from my local newsagent when I returned home, I unfortunately never saw it again! What I didn't know then was that Wonder was only available at Esso garages.

I did eventually find a copy at a comic mart several years ago, albeit only half complete with the centre eight pages (of sixteen) missing. However, what can be ascertained from those pages is that it was a high quality product.

Little seems to be known about the comic. It was published weekly on Fridays, cost 6d (2 and a half pence) carried a number but no date, and was edited by Roberta Leigh, creator of sixties puppet series Space Patrol. In fact another of Leigh's puppet creations, Wonder Boy and Tiger appeared as the cover strip. (Esso had been using imagery of a tiger for many years to denote roaring power, and the phrase "Put a tiger in your tank" was a popular slogan of the sixties.)

As these pages from Wonder (issue 13) show, the approach was very much in the Buster/ TV Comic style, along with rhyming couplets for strap lines of the kind associated with DC Thomson comics. Apparently the comic only ran for a year, although whether that was due to poor sales or the limitations of a 12 month contract is unknown. However, it remains an interesting oddity and a title well worth seeking out.

If anyone has any more info on Wonder (particularly what appeared in the centre pages which I have missing) please add a comment below.

I'm always interested in these comic oddities, promo. comics must be a nightmare to collect! The best examples of them (including Wonder #1) can de found in Dennis Gifford's Complete catalogue of British comics, items 478-489 and 501-512. Of these I only have #487, which is great, well worth seeking out and produced (so I'm told) in high volume so hopefully not TOO impossible to track down

Wow do you know I had forgotten all about this one...

I remember my Grandparents lived in Thornton Cleveleys, a little village just outside of Blackpool on the Fylde coast in the late sixties onwards. There was an Esso garage about half a mile away from their bungalow and my Dad used to load up with fuel on the way back and I used to pick this comic up at the weekends when we visited.

Thanks for bringing back a little nostalgia that brought some wonderful warm memories back to me of those times.

I have complete, issues 1, 2 & 19, plus the complete covers of issues 4, 6 & 10. The centre strip was 'Hovercraft Patrol' drawn as a colour spread by Jose Ortiz. Companion Hardy and Cadet Storm of the CCF - Crime Combat Force) seem drawn (no pun intended) from the same template as Tempo and Power from Roberta Leigh's abortive live-action 'The Solarnauts' ( http://homepages.tesco.net/~space.patrol/SpacePatrol/After2.htm ) and who knows, maybe reworks unsued scripts from it. Interesting also to note a strip called 'Bossy Boots' - a girl character of the same name appeared in Leigh's 'Torchy', and 'Chop Chop The Karate King' echoes her cliched fascination with oriental characters such as Lightning from 'Paul Starr' ( http://homepages.tesco.net/~space.patrol/SpacePatrol/After.htm ) and Dr Fang from the title strip 'Wonder Boy and Tiger', which was another of her short-lived and less-known series! ( http://homepages.tesco.net/~space.patrol/SpacePatrol/After3.htm ). 'Scatters' could well be in the same mold as 'Send for Dithers' which its focus on safety too...

Oh yeah, I have this very copy ( original, not pirated copies ) of the No. 11 issue Wonder Weekly comic as shown here. As I'm in Australia, and am continuing to collect the remaining issues which I only have eight of 'em - Issue No. 1, 4, 5, 6, 8, 10, 11 and 12. Not easy to find it while trekking for more of it somewhere near my old bookshop out in the Aussie street many years ago, but at eBay . . . The collection of above is my long-lost original Wonder comic collection when I was 7 years old back in 1970, but lost few issues of it after someone accidently thrown it in the flamin' incinerator at my old school's backyard which was unwittingly mistaken for a garbage material in a box I left it outside my class during end-of-term school break-up at cleaning the room session. It hurted me quite effectively. But eBay has saved my old memories when it was re-discovered at U.K.'s eBay site and bought it all to return back my old memories to restored my youth along with it. Rumour that Wonder Comics has continued up to Issue No. 52, right ?? I can't find it further after Issue No. 12 . . . So, any ideas beyond that ?

The issue I have is No.13 so it definitely continued beyond 12.
According to the late Denis Gifford, it did run to 52 issues although I'd have thought we'd see more of them turn up on eBay if that was the case.

However it's likely that later issues had a smaller print run so that may account for their rarity.

Anyone out there have any later issues, or even issue 52?

I have a number of complete examples of Wonder.My dad always went to fill up his car on a Friday and I got the comic!There were sometimes free gifts including a sweet!!Gaydon village service station is still there in sunny Warwickshire. I also have some said Christmas Carol pamphlets which were also given away.Grayson junior school had a stack of them which we used at Christmas.Two different covers on the same interiors!!

The centre pages were, on page 7, the Tiger's Teasers, a puzzle page and the centre two pages were full colour comic-strip story, The Hovercraft Patrol. The comic seems to have been produced without staples, just a loose-pages format.

I have several copies of this comic I came across and have them on ebay, but this blog was one of the only places I was able to find any info about them.
If its any help to anyone the ones im selling go up to issue 18, so that may be the highest number ive seen mentioned anywhere as yet.

Also want to add if you want pics of the front covers of any of them, feel free to use the pics or keep them for future reference if you wish :)