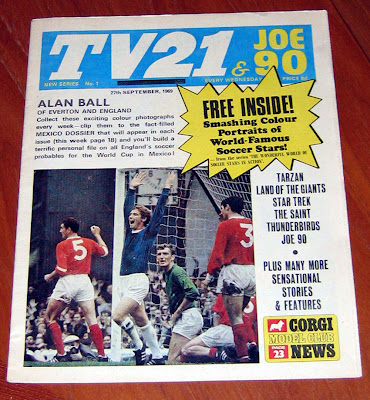 One of the few items I bought at the Memorabilia Show yesterday was issue No.1 of TV21 & Joe 90, a comic I originally had in 1969 but sold years ago considering it not very good. True, by this time TV21 was past its best (and would deteriorate even more before its closure in 1971) but the comic still contained some worthwhile material.

By 1969, City Magazines' would-be mini-empire of tv comics had crumbled. The perfunctory but far from awesome TV Tornado and Solo had long gone, and Joe 90 Top Secret was merged into TV21 after just 34 issues. Apparently Joe 90 was selling better than TV21 but lost out to the older title, presumably because the publisher felt that "TV21" had more longevity as the name of a comic. This would explain why the content and tone of the merged comic was more like Joe 90 than TV21. Gone was the faux-futuristic cover date of 2069 and the pro-Gerry Anderson theme. The revamped TV21 & Joe 90 was now a traditional tv adventure comic.

Publication of the first issue had been delayed for two weeks (due to a strike perhaps?) and the original cover date of 13th September 1969 was blacked out, and printed below was the new date of 27th September 1969. Football now dominated the cover (thankfully replaced by artwork reflecting the strips with issue 4) in a misjudged attempt to appeal to a wider readership. (Those readers would soon defect to IPC's new Shoot! footie magazine.) There was also a price rise, from 7d to 8d, and the first strip inside was a two page football story Forward from the Back Streets; a rags to riches tale more suitable to The Hornet. Could things get any worse for fans of the "old" TV Century 21? 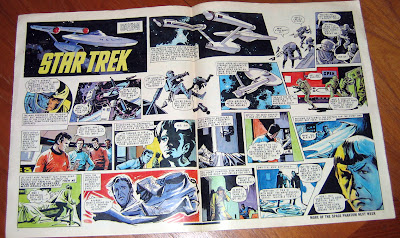 However the rest of the comic still held some interest for regular readers. The merger had brought Land of the Giants and Star Trek to TV21, both illustrated in full colour by Gerry Haylock and Harry Lindfield respectively. In many cases the scripts for LotG were better than those of the Irwin Allen tv series, but the Star Trek strip never seemed to quite attain the wit or sophistication of the tv show. 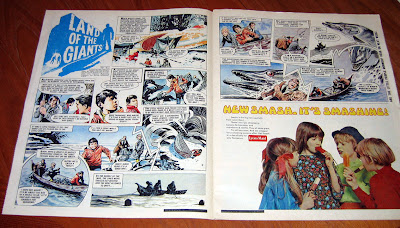 Don Lawrence, one of the most skilled comic artists in British comics, illustrated The Adventures of Tarzan on pages six and seven. A simple complete story in which Tarzan rightfully beats up a big game hunter and rescues a lion from "a lonely heart-broken life behind bars". 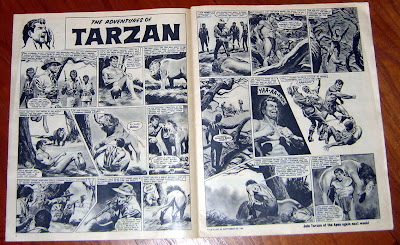 Another complete story, Meet The Saint, followed, with Vicente Alcazar providing the artwork for an uninspiring Simon Templar story.

The Joe 90 strip itself only took up a page and a half in black and white, drawn by Michael Strand. (Suggesting that Star Trek and Land of the Giants had been more popular than Joe 90 Top Secret's lead strip.)

TV21's major asset, Thunderbirds was still on board for the merger, although now relegated to just one page. However, it was still drawn by Frank Bellamy, albeit with a much more pedestrian layout that readers had come to expect of him. Clearly things were afoot, - a budget cut presumably, - and Bellamy left a few issues later, the strip turned to black and white, and John Cooper stepped in as replacement. 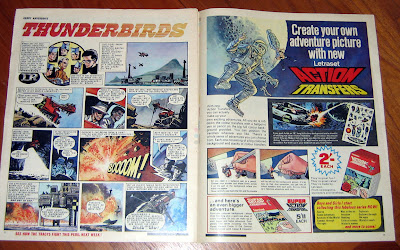 By coincidence the facing page to the Thunderbirds strip featured an ad for Letraset Action Transfers, - also illustrated by Bellamy! As we know, comics needed Bellamy more than he needed comics as he could always find work outside of the genre on ads such as these, or artwork for the Radio Times, etc. 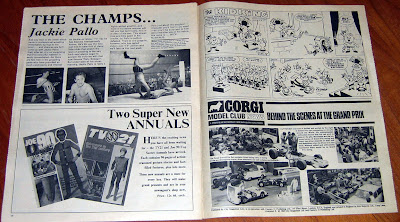 Issue one of TV21 & Joe90 ended with the humour strip The Kid King, written and drawn by ex-animator Roy Davis. His style was very simplistic but suitable for adding a lighter balance to the comic. (Roy Davis would later produce numerous scripts for IPC and Fleetway. Although his "scripts" were always done as pencil roughs. He provided many of the scripts for The Vampire Brats, a strip I drew for Buster in the 1990s.)

On the back page of issue one was an ad for Sugar Smacks, included here purely for nostalgic reasons. Sugar Smacks (Kellogg's version of Sugar Puffs) featured promotions like this throughout the sixties, with the box design changing to reflect whatever children's tv show was popular at the time. (Thunderbirds, Captain Scarlet, and Joe 90 had each featured previously.) 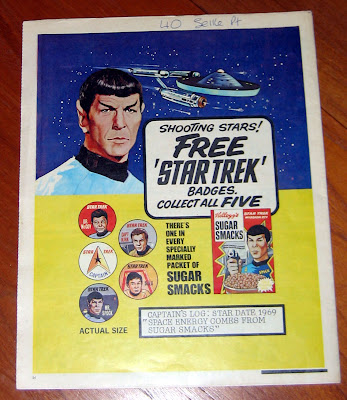 All in all, though a far cry from its 1965-69 heyday, TV21 & Joe 90 was still a reasonably good comic, and much more mature than some of the dumbed-down tv titles of today. However, the comic was doomed. Soon to lose its license to produce Gerry Anderson strips, the comic fell from tabloid to standard format in 1970, added a bunch of non-tv related strips, and merged into Valiant in 1971. But by that time, a new tv adventure comic had arrived, Countdown, which was out to gain TV21's lost readers. More on that here.

Very interesting about the relaunched TV21&Joe 90 comic. I always felt that from that point it was "dying", as it seemed to lose a lot of what made it special. I found a couple of later issues from circa 1970, and if you thought issue 1 of the relaunch was bad, it got worse as you said. It was still printed in the "tabloid" style, but the TV strips were diminishing. The days when it would be on different paper, with only Star Trek as the TV strip and only three pages of colour (front cover and centre-spread; I bought a couple of issues at the time and don't remember colour on the back) weren't far off!

I like your blog so much that I have given you a Roar for Powerful Words! See http://hamlife.blogspot.com/2007/11/roar-for-powerful-words.html

Lew, Regarding Bellamy's defection,
on the 4th June 1969, Alan Fennell notified Bellamy that Century 21 Ltd would no longer be publishing TV21 from the 2nd of June 1969. The editorial packages would be passed to City Magazines Ltd who nominated Mart Press to fill the pages. Bellamy, who must have been very frustrated with the changes in formats during 4 weeks, moved on to lucrative work with the Sunday Times, Radio Times etc, creating some really memorable graphic design images, and comic strips as opposed to a regular comic stint.

I noticed that the British Library catalogue has the earlier date despite their copy having the black strip you mention.

I remember at the time I was frustrated waiting for the comic, but don't remember it being a strike that delayed it, but the memory is that of a 12 year old, so industrial action wasn't uppermost in my mind!

Thanks for that invaluable information Norman.

Hi just been browsing the site and have bookmarked it for further reading. However seeing the above advert for Sugar Smacks (sounds like a rave drug) with Star Trek gift reminds me of the free Star Trek face cut-out masks that came on the back of Kellogs boxes in the very early 70's If i remember they were the main characters of the show but Kirk and McCoy seemed the most popular, with Sulu and Spock harder to get hold of. I have trawled the web seeing if anyone has these still or copies to view but never found any site or reference to them, any ideas or was i just imagining them?

Also on a similiar note does anyone recall the Cavalry cutouts on the reverse of the cereal boxes, they must have dated from late sixties to early seventies, i distinctly remember the Scots Greys, the Life Guards and the Hussars as cardboard stand ups. Again never seen or found any info on these, cmon people there must be a website that has a ref to these long forgotten freebies.

Bloodyrain - I have a large scan of the Sugar Smacks ad if you want it. Tell me your email address and I'll send it via YouSendIt.

Flippin' eck, Jackie Pallo, THAT takes me back!! Watching the wrestling with me Dad on a Saturday afternoon. I always preferred Les Kellett and Adrian Street!