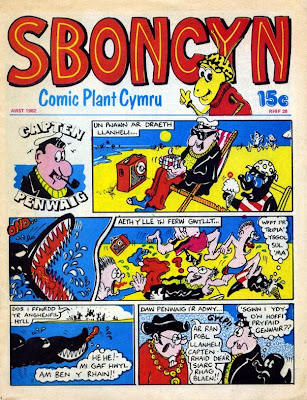 I have to confess from the outset that I know absolutely nothing about this comic other than the one copy I have in my collection. However, I thought it may be of interest to historians to include it on the blog and hopefully inspire a bit more information about it via reader feedback.

Sboncyn was a Welsh language comic from a publisher based in Caenarfon, North Wales. Featuring just 16 pages with only four in full colour, the one shown here (issue 28) is dated August 1982. I've no idea if the comic is still being published but I visit North Wales every year and have never seen it in newsagents so I assume not. 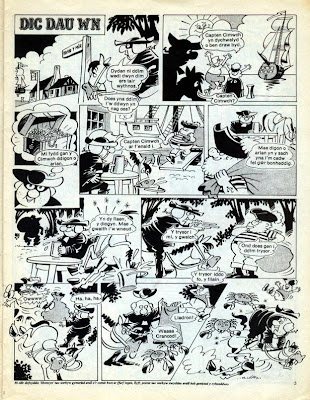 On the whole, the artwork is quite crude in its execution. The exceptions being the Dick Turpin spoof Dic Dau Wn and mischievous schoolgirl Wini Wirion. The strips are mostly single pagers, with a few double pagers included. They're all humour strips except for a Western adventure strip in the centre pages. Several of the strips have a maritime theme for some reason, perhaps inspired by the location of the publisher and that the comic would be sold along the coast? 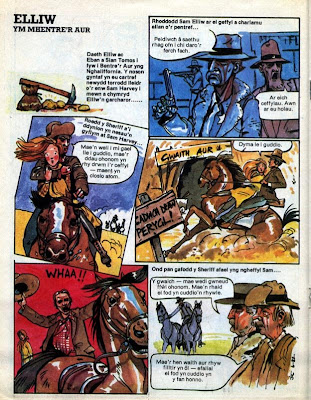 I'm sure Welsh readers of this blog may be able to shed more light on this comic. If so, please leave a comment below. Thanks in advance!

Hi Lew, the Dick Turpin spoof was drawn by Solihull freelance cartoonist Mick Davis, I can recognise the style a mile away. In my professional capacity I've used Mick a few times over the years for one-off illustrations, and as far as I know he's still very much in business.

My wife might be interested in this; she is of Welsh heritage and for a while took Welsh-language lessons from a lady here in our city who grew up near Wales. (My wife and I visited Cardiff on our last trip to the UK about 10 years ago.) Thanks for posting this.

Lew - Some of the “crude” drawing in Sboncyn (Grasshopper) was mine. I don’t think you like what I do for Spaceshipaway either! The comic started in May 1980 and I was part of it sometime in 1981/2 - taking over the Jac-Do strip (very adjacent to the Crows in Valiant) and later Alys Ofalus (Careless Alice). It came out monthly, funded by the Welsh Arts Council (or some such) mainly for use in schools, and even managed a couple of annuals. The page rate was no more than beer money. It was re-launched as Penbwl (Tadpole)in 1989 and shortly afterwards switched publishers from Stiwdio Mei to Gwasag Gwynedd. I was given Huwi Hurt to do in Penbwl. I think he was meant to be like Dennis the Menace, but I turned him into a Hungry Horace clone. Penbwl folded in Summer 1995, with issue 73, when the grant was re-directed towards a nursery comic with a different publisher. I’m neither Welsh nor Welsh speaking. I got the job because of once working at DVLC in Swansea. I did most of my own scripts (they did the translation), which was challenging because it’s almost impossible (apparently) to pun in Welsh. Ray Aspden

Thanks very much for the info. Much appreciated.

Sorry if my comments upset you. My early work was very crude so I didn't think such a comment would offend. What makes you think I don't like your work in Spaceship Away? I think it's great!

Dear Mr.Stringer, I am a regular purchaser of Spaceship Away and I think the work of Mr.Aspden is wonderful. His cartoon gifts are of the old school, perhaps before your time.

Get off your high horse Mr.Stringer and have some respect and stop knocking other artists.

What is this? I have never said I didn't like Ray Aspden's work. On the contrary; I like it very much. I have no idea why Ray thinks otherwise.

Lew, I'm pleased to see Sboncyn again. Years ago, while on holiday in Aberystwyth (have I spelt that correctly)?, I bought a copy in a newsagents there because I like to pick up any oddities I come across. Needless to say, I no longer have it and haven't a clue where it went. Thanks.

I have 18 issues, any interest?

The second strip shown 'Elliw Ym Mhentre'r Aur' is drawn by the wonderful Jac Jones, who inherited the mantle of the famous Sali Mali books from Rowena Wyn Jones in the 1970s and who's also fully in business. He's a mainstay of Welsh-language publishing for children and young adults. He's just illustrated several books eg. Pobol Drws Nesa with popular Welsh-language author Manon Steffan Ros, and Ifor Bach with Welsh antiquarian scholar Eurig Salisbury.
As a child of the 70s, I was brought up on Sboncyn and Penbwl, and loved them. They were needed, and children of Welsh-speaking families are grateul for people like the late Dafydd Mei (of Cyhoeddiadau Mei, Penygroes, who published Sboncyn) for venturing and doing things like this in Welsh. We're a minority language. But I disagree with Ray - you can pun very well in Welsh. Maybe that idea came when trying to translate a pun, which is a very difficult thing indeed, into any language. Diolch, Non Tudur

Thanks for the info, Non G! This post continues to gather interest despite being 12 years old so it's always good to hear more about the comic.

Hi. I have discovered 80 issues starting from 1980. Any interest?