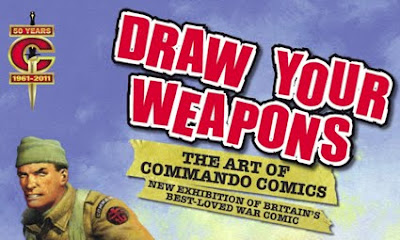 Opening on September 1st, a major exhibition of artwork from DC Thomson's Commando comic is to be displayed at the National Army Museum in London. The event commemorates the 50th anniversary of the long-running comic and according to Commando editor Calum Laird "upwards of 70 Commando covers will be on display, from every period of our history". You can find out more about the museum by visiting its website:
http://www.nam.ac.uk/exhibitions/special-displays/draw-your-weapons-art-commando-comics

Speaking of Commando, the latest four issues will be on sale this week. Here's Calum Laird with all the info:

The four Commandos which come out this Thursday are a major milestone for Commando. They include No 4404 which is our 50th birthday edition, specially written for the occasion. I think it has all the ingredients which we have tried to mix in over the years and I hope everyone will enjoy it.

We certainly enjoyed working on it and no, there are no prizes for spotting any in jokes.

The actual birthday is the 27th of the month, next Monday. Cakes and crates of (non-alcoholic) ale may be addressed to the Commando Office. 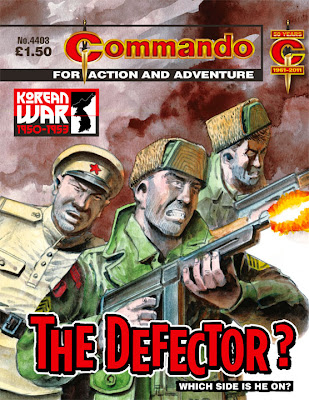 Lieutenant Levka Kosilev was a man of principle, a man who would repay a debt of honour. The Russian officer had only survived the dark days of World War II thanks to the actions of a brave American corporal and his squad. He knew how much he owed them.
Some years later Levka — now an observer with the forces of the North during the Korean War — expectedly found himself in a position to settle the debt. To do so, however, he would have to defect. Could he do it? 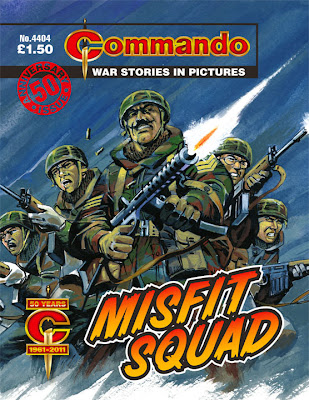 Dave, Brian, Pete and Sid were undoubtedly the worst soldiers their C.O. had ever come across. He doubted they would ever get through their basic training. But Sergeant Rod Black thought differently, he could see something in the four that no one else could.
And one night in June some 50 years ago he and his misfit squad got the chance to prove him right…or wrong!

Introduction to the 5oth birthday edition

Lots of things have changed over the last 50 years...the Berlin wall has risen and fallen, the moon now has bootprints on it and the internet has changed the world in a way that could not have been foreseen in June 1961.
But amongst all these changes, some things have remained unaltered. Take Commando for instance - it's still packed with action and adventure, everyman heroes and villains, and the best comic art still resides on and between its covers.
To celebrate our 50 years, a special story has been written. And it's got all those qualities that make Commando something special.
This is that story and the whole Commando team, past, present and future, hopes that you'll enjoy it as much as No1 was enjoyed in June 1961. 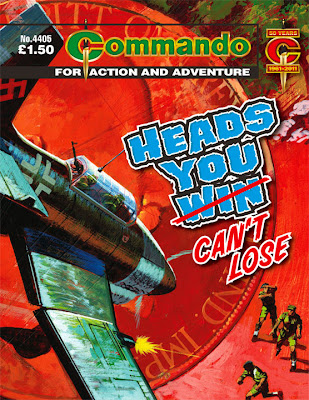 When Ned Dolan flicked a penny in the air and David Bradford called tails, it looked as though he had signed his own death warrant — for the loser was to become bait for a deadly German sniper. And Dolan had never — but never — lost a toss with this special penny.

Re-reading this book after so many years, I began to think that I had chosen the wrong book. Sure, Penalva’s cracking cover with its crazy viewpoint was as I remembered it, but I didn’t recall the armoured cars. Then the jeeps arrived and I knew all was well. I even remembered the balloon which began, “fellow footsloggers of the humble infantry…” and the huge fist fight that followed.
In fact, the punch-ups are almost the signature of Snr Fuente’s inside artwork. He puts so much action and movement into them that they don’t seem like static pictures at all. Later I would work with author Cyril Walker’s material, something I’m sure I acquired a taste for in this tale of double-dealing and double-crossing. 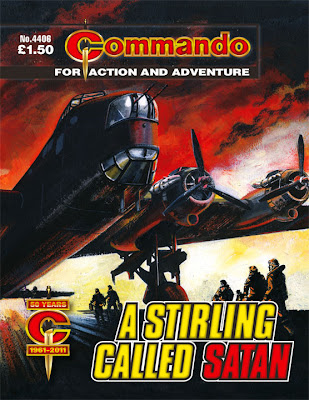 
It was dead unlucky, that Stirling bomber. Flying low it would catch most of the flak, flying high it was certain to be pounced on by enemy fighters. Every time the crew set off on another mission they wondered if it was going to be their last. Even its number, five-three-five, added up to thirteen…

To pick my favourite issue was a challenging mission, because I’ve enjoyed several lengthy engagements with Commando over the years. I’ve chosen A Stirling Called Satan for several reasons. Most importantly, I remember first encountering it in 1988.
I was fourteen, at secondary school and my favourite subject was history. I loved reading too, so Commando was a natural choice after moving on from The Beano and Roy of the Rovers. Imagine how excited I was when I saw my name on the cover — even if it was connected with Satan himself!
I was so captivated by idea that there was a plane called the “Stirling” that I actually bought, and built, a model kit version. Well, actually two versions; my first attempt at painting it was a disaster.
The story is classic Commando; ordinary guys doing extraordinary things. I always tried to imagine what I’d do in similar situations. I never ran away, but it’s easy to be brave in your imagination. There is a freaky superstitious undertone too — nothing is predictable in a Commando story.
I still enjoy Commando today, even amongst all the fabulous publications I’m privileged to read as part of my job. It just goes to prove that Commando’s brand of action and adventure resonates across ages.

http://www.commandocomics.com
Posted by Lew Stringer at 15:50

I was driving an old guy(through my day job)one day on a long drive, and he had been featured in an old Victor comic, on the cover-his tank ran into a German patrol and basically creamed them(this was during the war, by the way). I asked him about it-just out of nosiness to see if the Victor had got their research righ- but he didn't want to talk about the war, which is fair enough, it was a pretty traumatic experience, after all, which we tend to forget. Peace.

Wise words Davy. It's easy for comics to present war as a big adventure and to ignore the suffering and harrowing cost of it all. That's what put me off war strips as a kid. The horrors of Viet Nam were on the news but comics were still treating WW2 as a jolly romp. (Especially the appalling Captain Hurricane stories in Valiant.) Commando does handle it more maturely but Charley's War remains my favourite. Give me anti-war strips every time.