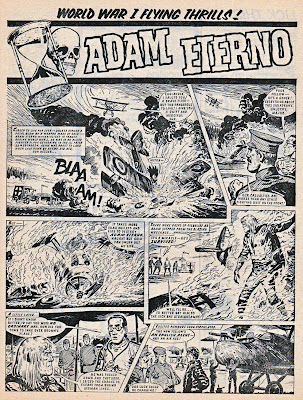 News is coming in of the passing of Francisco Solano Lopez, whom many of you will remember as the artist of such great British strips as Adam Eterno, Kelly's Eye, Janus Stark, Master of the Marsh, and many more.

Born in Argentina in 1928, Lopez began his comics career in 1953 working for publishers in his own country and started freelancing for Fleetway in 1959. His dark, atmospheric brush strokes were perfect for the new emerging boys adventure weeklies such as Valiant, Lion, and Buster. At a time when imported American comics had to work under the restrictions of the Comics Code Authority, British comics used their own judgment, allowing creepy horror scenarios in their strips, such as this example from Kelly's Eye (Valiant, 24th April 1965). The use of heavy black areas and the fear in the faces gives the strip the perfect feeling of claustrophobia and terror: 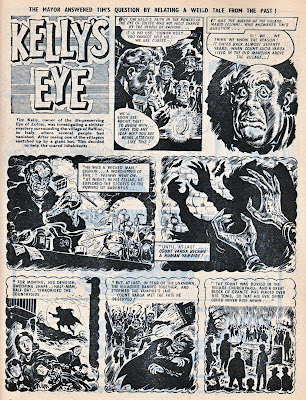 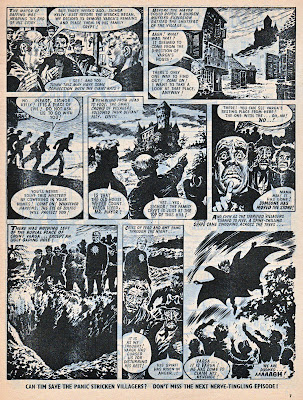 The talents of Solano Lopez could also be seen on slightly lighter and more slapstick series, such as Galaxus and Pete's Pocket Army in Buster... 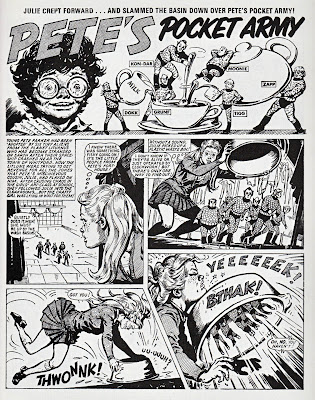 Lopez was able to convincingly combine the fantastic with a gritty street-level feel to his work. One example of that is this page from The Fugitive from Planet Scror (Lion, 1970) with the artist working from a very contemporary script proving that IPC were putting some streetwise elements in their stories several years before Battle or Action debuted... 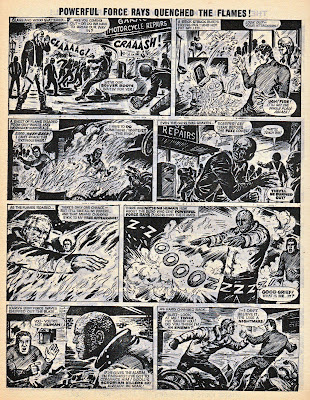 Every boy who grew up on Fleetway adventure comics of the 1960s and 1970s would be familiar with Lopez' work, whether it be from strips such as early football adventures of Nipper in Score 'n' Roar to the long-running adventures of Kelly's Eye and Adam Eterno. Although the artist found fame in adult comics (and found credits where due, unlike on his anonymous UK work) his strips formed a huge and important part of British comics. Due to the gritty edge of his style his pages still seem exciting and vibrant today. Long may he be remembered. 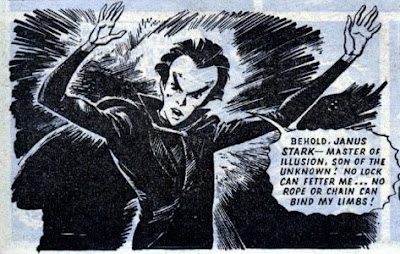 John Freeman has written a fascinating and well researched tribute on his Down The Tubes blog:
http://downthetubescomics.blogspot.com/2011/08/in-memoriam-francisco-solano-lopez.html

Another of the old guard of legendary artists passes away - sadly there seems to have been a lot over the last few years,then again these true giants of the mediumm are all getting on a bit now. As you stated lew if you were a kid (or adult) in the 60's you couldn't have failed to have read Solano Lopez work it seemed to be everywhere and it was ALWAYS excellent - I especially loved Kelly's Eye, Gallaxus, Raven on the Wing and Adam Eterno and spent many a day avidly reading his work and trying to copy his panelsf - Solano's was for me at least one of the main reasons UK comics were so good in the 60s early 70s, like so many artists of his age (in the UK, US and Europe) he produced 1000s of pages every year (no doubt under his studio) of consistent quality unlike some of today's 2 issue wonder prima donna's (talking mostly newer US creators here)sadly like Gene Colan I don't think he ever got the real recognition for his work except from us kids and now fans, which may be the best tribute to his work - thanks again for the fun Franscisco you were with a few others UK comics to me . McScotty

One of those artists with a totally unmistakable style. Sad news.

Another great artist gone. Every christmas in the early 80's the Lion annual was one of a bunch of annuals I was given. Of course there were no credits so I didn't realise that I was reading Solano Lopez art till the early 90's.

A late night tv series called Comics: The 9th Art had a feature piece on him and his argentinian produced strip El Eternauta written by Hector German Oesterheld. It should be remembered also that Solano Lopez worked under conditions of extreme repression in Argentina and his friend Oesterheld was killed by the regime (along with Oesterhelds 4 daughters).

Hopefully someday we'll see a reprint of El Eternauta in english along with the great IPC Fleetway strips he did.

Of course, nobody lives for ever but when an integral part of your childhood dies it brings out your own, selfish intimations of mortality. For me, Janus Stark struck the deepest chord for the usual reasons of 'outsider overcoming insurmountable odds' with which surely every child feels some affinity.

Yes, the first Janus Stark episode in particular was a masterpiece. I'm sure the editors of Smash! realized its worth as they gave it more than the usual number of pages in the new issue one. It certainly stood out as the best strip by far in that first revamped Smash!

I did some digging around on Spanish language sites for my tribute on the downthetubes news blog and found some stunning illustrations Solano was doing for an Argentinian news agency as well as his other work that has had little exposure here in the UK or the US.

It's Ironic that a man who had to flee his own country ultimately became a hero in his own right for his work. 'El Eternauta' is hugely popular there.

A great piece of research John! I've updated the post to link to your article.

Thank for the tribute Lew! As you know , I have an especial love for Adam Eterno and Solano was for me the definitive artist for that character. Sadly missed and truly one of the greats! Tonight Adam Eterno mourns the loss of his earthly father but rejoices because now they travel the time lines together forever!

I was really sorry to hear of Solano Lopez' death.How did he get such lush lines? Obviously brushwork, but there seemed to be a lovely shine to them, the blacks were really black, and he was never afraid to use movement lines, either, even though he didn't need them.Titan or somebody need to do an 'Art of Solano Lopez'-as well as all the other IPC greats-Eric Bradbury, Jesus Blasco, Joe Colhoun, etc,etc. Maybe we need to round up all the old IPC guys who are still alive and interview them, if there are any left. Anyway, a great shame, another hero
gone but not forgotten.Vaya con dios, mi amigo.

His style was something special indeed Davy. I understand he used white ink quite often to pick out highlights etc. A truly unique style. Along with Joe Colquhoun I think Solano Lopez' work was, for me, the most memorable of the Fleetway adventure comics. When I think of that era it's often scenes from Kelly's Eye or Janus Stark that immediately spring to mind.

Nice to read the memories of your childhood, your grateful feeelings about Solano. I'm José Munoz, I worked with him as an asistant during the fifties (El Eternauta) and the late sixties
(Kelly,Janus,Adam, Raven) and we could say that him was one of the few people able to drawcharacters that looks directly trough the deeps of your soul. Thanks, gracias, little childs of yesterday, viejitos(old timers)of today, like me.I hope you could arrive to read and look El Eternauta. Sometimes life is a many splendorous thing.

Thank you very much for posting a comment, José. Yes, his characters were very intense and very compelling for us to read. My very best regards to you.