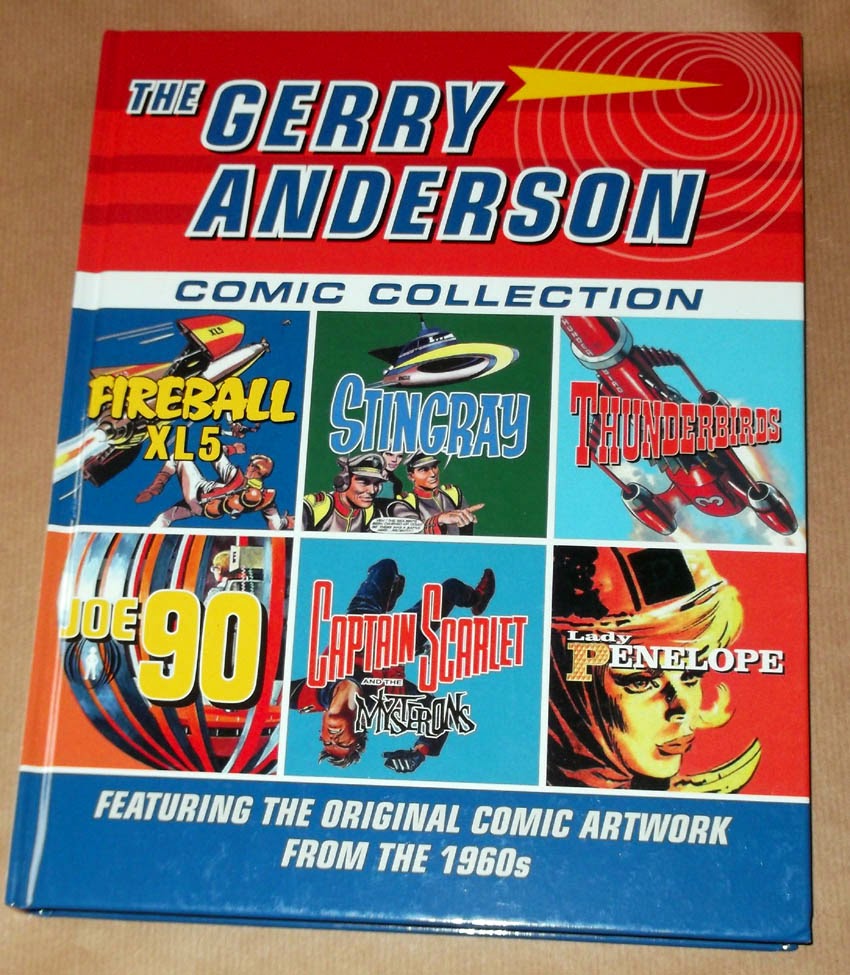 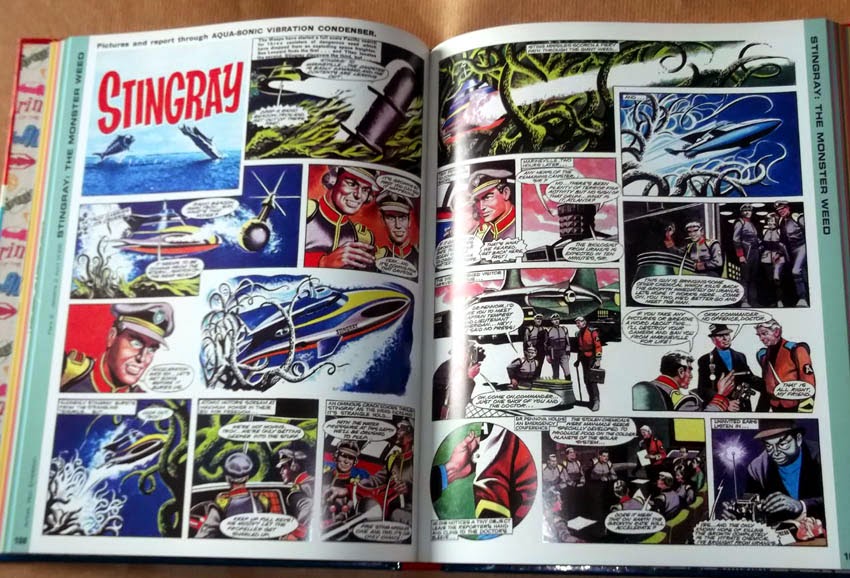 Hardback, 288 pages on top quality paper, it's a hefty book. It has a selection of strips for each series, and begins with three Fireball XL5 serials, including Mike Noble's first work on the strip from the early issues of TV21. The art has been shot from the comics, so the quality depends on how good the reproduction was back then. Most times it's excellent (TV21 was printed Photogravure, the best method available) bar from some slightly off-register pages that were evident in the original comics. However, for some reason one story, (the memorable serial about giant animals and ants invading New York) seems to be over-saturated and too harsh. It's a problem that also befalls the five page Angels story reprinted from Lady Penelope. I'm guessing that in trying to bleach out any browning of the old pages, it also knocked out some finer aspects of the painted art. I don't mean to be too critical, as reproducing artwork for print can be a fiddly task, and more complex than simply scanning something for a blog. I should stress that the majority of the book has very good reproduction and is close to the original printings. 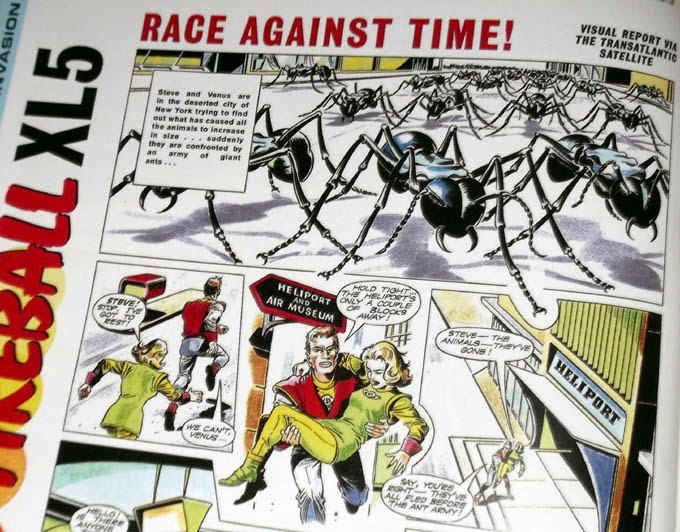 There's a good selection of Frank Bellamy's Thunderbirds strips here too, including the very last ones he did for the combined TV21 and Joe 90 in 1969. Some nice Ron Embleton Stingray pages too, and the first Stingray serial that Ron's brother Gerry Embleton drew.

Lady Penelope is well represented with two serials from 1965 illustrated by Eric Eden. There's also a complete Marina story drawn by Rab Hamilton, from the first 23 issues of Lady Penelope's own comic. 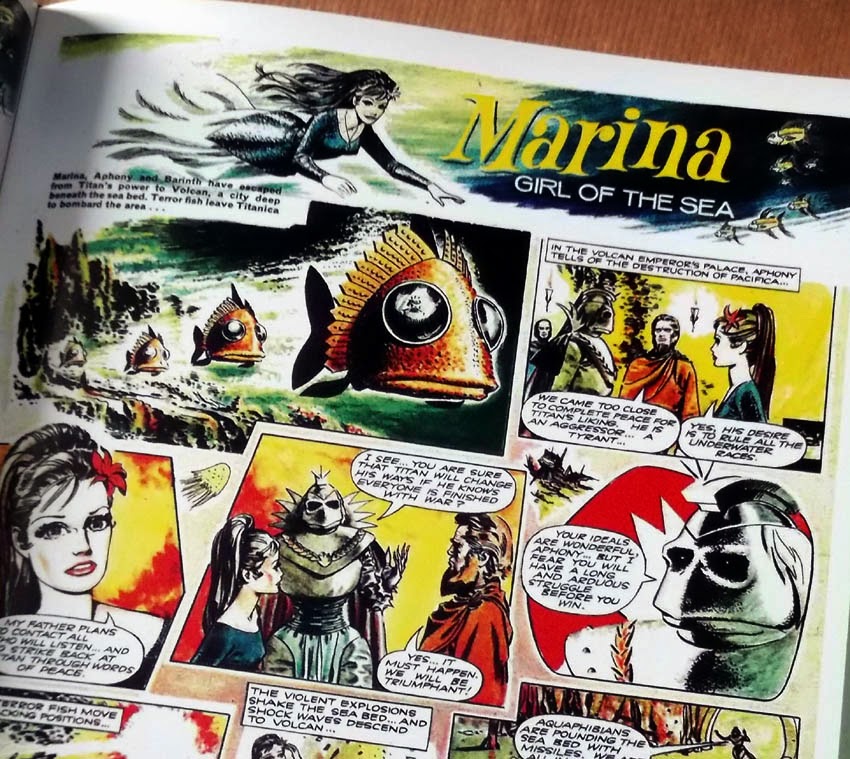 A few Captain Scarlet stories are here too, from 1968 when the strip featured on the cover of TV21, although he book has chosen to omit the TV21 logo. There does seem to be a mistake in crediting both Ron Embleton and Mike Noble on one story which looks entirely like Embleton's work to me. 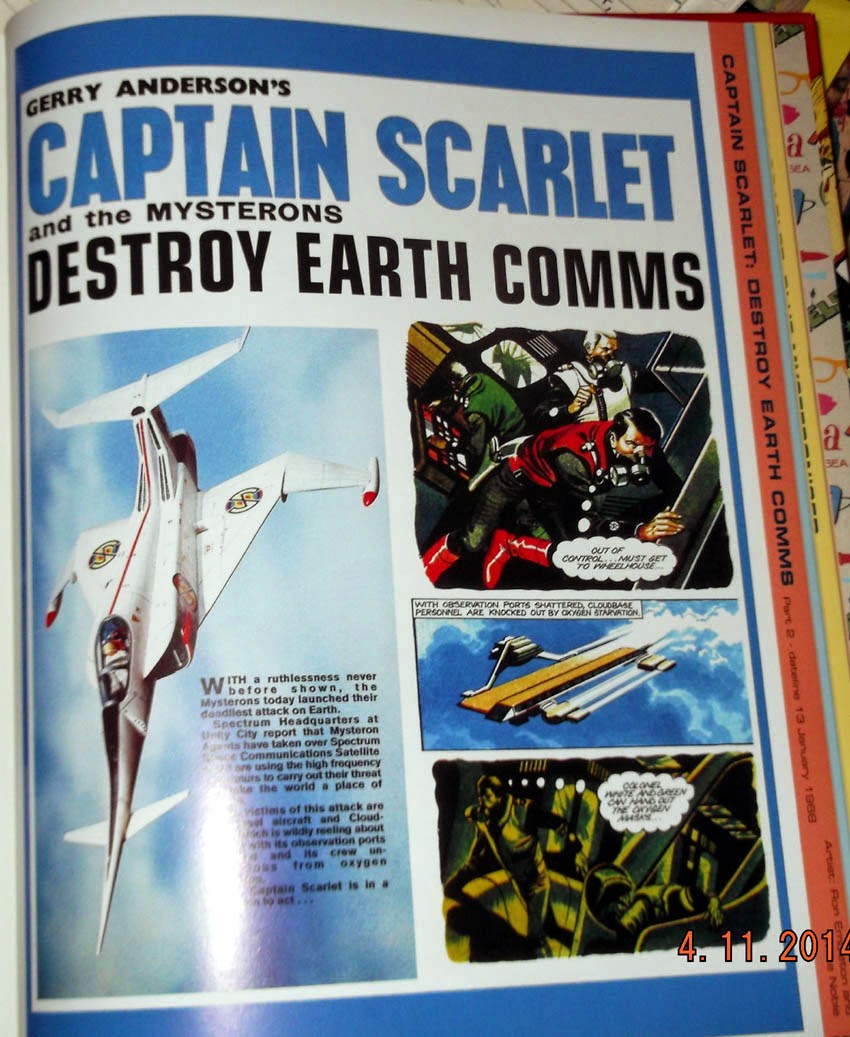 The great Mike Noble is well represented with not only his Fireball XL5 strips but also two of his Zero X serials. There's also a short article on the artist's career, as well a spotlight on Frank Bellamy and background information on the original comics. 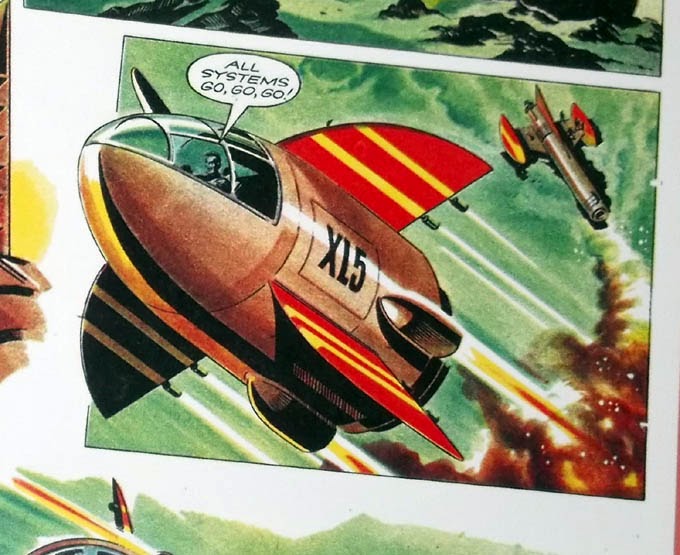 The book ends with a couple of Joe 90 strips. Unfortunately they're scanned from the colourised 1990s reprints rather than from the original 1969 comic, but that's a minor flaw and it's only a few pages.

There's also a companion volume released at the same time: Inside the Worlds of Gerry Anderson by Graham Bleathman, which I've reviewed here:
http://lewstringer.blogspot.co.uk/2014/11/review-inside-worlds-of-gerry-anderson.html
Posted by Lew Stringer at 15:05

This book has just shot right to the very TOP of my "wants list"!!

It's an expensive book but there's a lot to read and tons of great artwork to study. Hopefully when it's been out a few days it may be available cheaper from various online sellers.

I take it that this is a ' best of ' book? I, unfortunately, am not overly familiar with these stories.

It's all reprints, yes, from TV21 and Lady Penelope, two of the best comics of the 1960s. It's a slicker book than the other 'Best of' ones that have just been published, and has a LOT more pages. It's still using the 'Classic Comics' imprint that Egmont have used on those 'Best of' books though.

Hi Lew - Thanks for the excellent review, which I've only just discovered. As editor of this volume I tried to make sure we featured as much material as possible that hasn't been recently republished, and as you've correctly gathered it was mainly scanned from original copies of TV21. The only exceptions were the Angels and Joe 90 strips, which were scanned from copies of the 90s Fleetway comic, and the third Fireball strip, which was scanned from a recent reprint volume. Unfortunately it seems that this was treated in the same way as the original comic pages to correct the age discolouration without the publisher realising that this had already been done for the volume it was sourced from - hence the bleached out effect. I also discovered too late that someone had coloured in some of the rocket trails in a Fireball spread with red biro !

Good to hear from you Sam. Long time no see. Hope you're well. Yes, it's a shame about that Fireball strip being bleached out as it's one of the best ones. These things happen unfortunately. But, - a good book all the same, and I hope it's introduced new readers to the delights of those great strips.