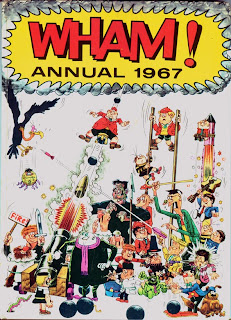 Christmas Day 1966: Thousands of kids across the UK awoke to find the Wham! Annual 1967 in their pillowslips. A wonderful package of fun colour strips by Ken Reid, Graham Allen, Gordon Hogg and others. That explosive masthead is a memorable part of sixties comic culture.They don't make 'em like that anymore!

The cover artist was Graham Allen, an undervalued cartoonist whose work of that period has often been mistaken for Leo Baxendale's. A fantastic piece of work representing the anarchic attitudes of those old Odhams comics; kids running riot and an authoritarian teacher proving ineffective. Many of the visuals on that cover wouldn't be allowed in a children's comic today: boy tied to a firework; syringe being used; dart fired at a bird; teacher with cane... parents and retailers would have a fit if just one of those items appeared inside a comic today, never mind on the cover of a Christmas annual! (Even though I'll bet no kid who had that book ever copied any of the violence. I certainly didn't. Kids know the difference between cartoon violence and reality.)

Are we living in more restrictive times or more responsible times? You decide! ;-)

This was the second of nine Wham! Annuals. Click on it to see a full size version.

I think kids should be able to tell the difference...though because kids are not exposed to it in comics these days maybe it would make them play around with fireworks..Giles.. Tom and Jerry..Dudley D Watkins...Ken Reid.. did some super stuff with kids and fireworks...I always found it funny myself....bring back danger in comics...the comic characters don't get hurt for long...toning down black humour is a mistake...laughing at these things is healthy..

Very true Peter. The over-cautiousness in comics of the past 35 years hasn't solved anything. There are still kids who act irresponsibly. Society can't blame comics now so it blames video games instead. People are too eager to blame the media for their own shortcomings.

Good old Wham Annual 1967! It's a valued relic on my bookshelves as is Wham Annual 1968. The spines of the books are damaged and have been patched up by masking tape on numerous occasions, I wonder if a bookbinder could restore books like these, eny ideas, enybody? Feel free to contact me thru email.