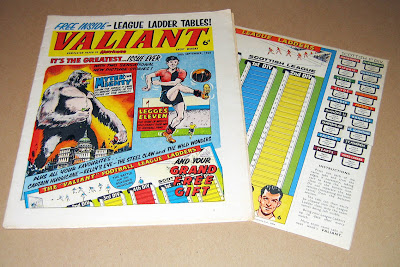 Free gifts in comics now seem to be mainly produced by outside firms who supply various cheap plastic novelties within an appropriate package for the relevant comic. Therefore similar mini pinball games etc could turn up in anything from Dandy to Spectacular Spider-Man just with a different backing card, and with most UK comics on the whole aimed at a younger reader than they used to be, free plastic toys are the standard.

Twenty, thirty, forty years ago things were much different. Free gifts were a rare treat, not an expected regular feature. They were used to help launch a new comic or to give it a boost at occasional intervals. Producing the free gifts in-house, editors had to be inventive as the budget usually limited them to creating ideas from cardboard (or at a push, cardboard, elastic bands, and maybe a balloon).

The variety of free gifts they came up with will be a subject for a later blog, but amongst the most popular were the "Football League Ladders". Readers of the football magazine Shoot! will no doubt remember those, as they were given away in Shoot! No.1 (1969) and yearly thereafter for decades. However, the idea was older than the magazine itself, as Valiant proudly presented them free back in September 1964. (See photos.) 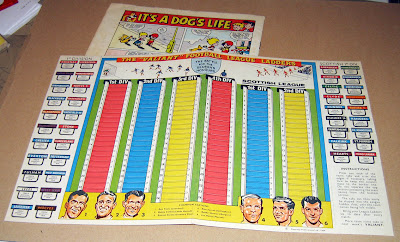 A simple concept: a single sheet of card, with pre-cut "Team Tabs" down each side which you'd press out and place in the pre-cut slots on the division "ladders". (Third and Fourth Division teams usually came free the following week.) Every Sunday we'd study the papers for each team's position, and change the tabs around to accurately reflect their latest standing. Even for a non-sporty type like me it seemed fascinating and would occupy a half hour or so.

I wonder how many readers kept up the chore throughout the whole season? Not me I'm afraid. I'd always give up after a few months, and the League Ladders would either be put away and forgotten, losing half the tabs in the process, or thrown away to make room for more comics.

Do the football mags still give away these Ladders at the start of every season? Somehow I doubt it, as I'm sure kids now just bookmark a footie page on the internet for the team positions instead. (Plus there are more divisions, more leagues... too complex for a simple cardboard chart perhaps?)

As I said earlier, I'll be writing a blog covering free gifts in general eventually, so if you have any memorable favourites, let me know and I'll try to include them. (I'll be mainly focusing on the 1960s to 1980s.)

Lew,I can forward scans of 3 free gifts in my possession.2 from the first two issues of Toby circa 1976 and one from Issue 1 of Saw-Saw.Both kids comics but free gifts nonetheless!

Depends what they are. I'm hoping to show the variety of gifts that editors produced on a limited budget. I already have a boxful of old free gifts from the sixties to the eighties. None from nursery comics though as I never read them. (Except for a few issues of Bimbo - but that was AFTER I'd started with The Dandy and TV Century 21!)

I'll also be showing the more "famous" free gifts: Thunder Bang; TV 21 Code card; etc. Let me know what those gifts you have are, but I can't promise I'll use them as I already have loads.

Well the Gnasher snapper springs to mind.....used it a lot....had to tape it up after awhile from ripping for over use...:)

The sweets that crackle in your mouth also sticks in my mind......space dust free with The Beano...I can even remember I was visiting my Aunt in Milton Keynes at the time...

The Korky glow in the dark mask was super...loved seeing the spooky look at night...wished I had it now..it had a 3D green look..

the 50 years Beano and Dandy sticker album with stickers given free later was very new...the first sticker album given with a comic...good fun swapping stickers...trying to complete it..

Whizzer and chips gave away a transfer pad...write your secret message...then later wipe it out by laying on the plastic...Mum had to buy 2 for me and my sister as it had free sweets which went great with watching ET!
also liked the free play people cowtoy......so quite original gifts...posters were also great..

The Toby gists are a balloon and a rotating nursery card and the See Saw one is a box of crayons!

The nursery card might be of interest if it was made in-house. I'm avoiding the "bought in" gifts like they use today. The article will focus on free gifts created by the editors, particularly ones that tied in with the comic (such as a "Pete's Pocket" free gift that was in Knockout). So things like sweets are out. (Already eaten or thrown away long ago anyway. :))

I have loads of old free gifts, and space is limited, so I'll mainly be scanning or photographing the ones I have. What I need to know is if people have favourites, then if I have them, I'll show them.

I know that the league ladder free gift has been given away with Match Magazine for the past few seasons, so the tradition still lives on!

Love the blog by the way, I really enjoy reading it. Keep up the good work

Thanks for that info TBUK! Not being a footie fan I didn't know that. Good to know it's still around.

Chanced upon this blog when I was trying to explain, to a friend, what a cardboard league ladder was.

I guess I was one of those kids who actually updated the ladder week after week and when the season is done, would sticky taped the tabs in place permanently.

Thanks for the memories.

Just for info, my favourites were the thunder crackers (given away by most comics in the 60s) and the glow in the dark Korky mask (halloween edition I believe).

I loved the League Ladders from Shoot! In fact I still have a set in my collection.

I think these league ladders are older than that, I remember having one out of a comic during or shortly after my team Norwich had their famous cup run in 1959-60.