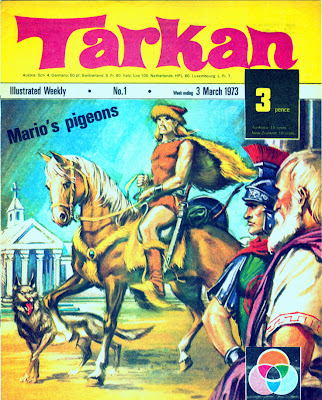 Unlike today, with comic racks in High Street shops dominated by pre-school magazines by the major publishers, the 1970s saw an assortment of comics come and go from a variety of publishers, large and small. One of the shortest lived oddities was Tarkan, launched in late February 1973 from Simavi Publishing Ltd.

Tarkan was a reprint of a popular Turkish comic written and drawn by Sezgin Burak. The title character was a warrior in Atilla the Hun's army, "the great hero of the Turks" who fought the Romans. The weekly British comic featured just 16 pages, half the length of a 32 page IPC comic, but all in full colour (albeit flat and slightly off-register colour). Most UK comics at that time would be mostly black and white, but Tarkan's flimsy format still made it look poor value in comparison. 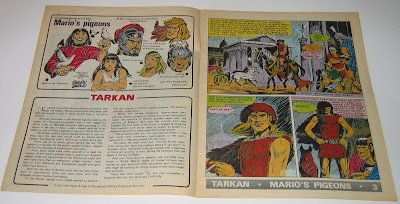 The storytelling technique was unsophisticated but slightly more adult than the usual fare British readers would be used to. Tarkan beds a woman at the end of issue one, although the English translated caption states that "Gently Tarkan pushed her away, for he had come on a mission of hate, not love". Presumably it was a completely different scenario in the original Turkish text, as the couple are both (discreetly) naked in the next moment.

According to the late Denis Gifford's Complete Catalogue of British Comics the comic only ran for 34 issues in the UK. I must admit I gave up on it after issue one, although that was more to do with the style being unfamiliar than the quality of the comic. At 13 one is less willing to give unusual comics a chance unfortunately, and given Tarkan's short run, I'm guessing most kids of my generation felt the same. 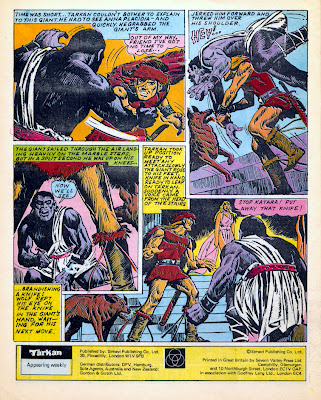 However, in its native Turkey Tarkan is apparently hugely popular. From briefly researching the character I found that the series began there in 1967 and featured in 21 magazines with a total of 15 adventures. (The one that ran in the UK weekly, the undramatic sounding Mario's Pigeons being the fifth adventure it seems.) 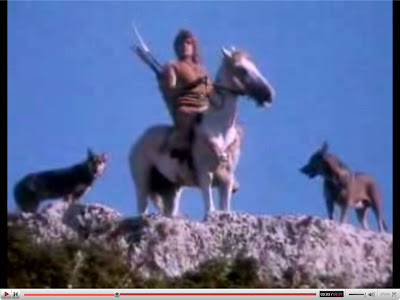 From 1969 the character was also adapted into a series of films with scripts written by Burak. YouTube currently has the 1971 film Tarkan, Viking Kani (Viking Blood). "Cheap and cheerful" would be one description. Here's a clip (best viewed with Firefox or Safari browsers):

I had forgotten all about this one.

I had forgotten all about this one.

Tim and me both!

Back then we bought anything that looked like a comic as DC Comics were hard enough to find, and alternatives to the usual UK comics were even harder.
When things like Super DC comics came out we bought them; when Marvel properly reprinted their stories in Mighty World of Marvel in the early 70s, we bought them.
And we even bought Tarkan - I got to about issue 3 before giving up....but I think you were smarter than me!
Best wishes

Not of course to be confused with top Turkish rocker Tarkan (http://en.wikipedia.org/wiki/Tarkan) whose most famous track, Kiss, Kiss was ripped off by Holly Valance...

Tarkan no.1,just found it from some old comics from when i was a kid.is it collectable ?

Not particularly collectible, but I never take any notice of price guides etc. People pay for what comics are worth to them.

Well I know this is a few years ago but glad to find out it finished after 34 issues as I have got them all! I loved it back then and thought my mum had just cancelled it as she'd realised it was slightly more raunchy than Warlord. Also had some funny cartoons on the back. Cheers for the info

Glad to have been of help!

I loved this comic. Having most of the UK run & half the German run, I am surprised it was on the kids shelf. The nudity & violence is still pretty strong today. Not greatly written but it was the 70s, so apart from a few titles most weren't Shakespeare anyway. The title was good fun with some good stories & varying artwork. Still like it.

Oddly, ten years on, I see the page showing the 'controversial' scene is missing from this post! It was there when I uploaded it in 2007, and it's hardly as if it featured any proper nudity, but now that image is gone! Censorship by Blogger, or just a glitch? Puzzled.