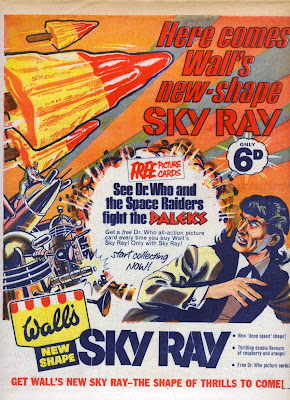 Concluding this week's look back at old advertisements in children's comics here's several ad pages from the 1960s. Wall's Sky Ray ice lolly (above) often had a picture card as a free gift inside its sleeve and in 1967 it gave away a series of cards featuring Doctor Who and the Daleks. You'd be forgiven for not recognizing which Doctor is illustrated. Although Patrick Troughton was The Doctor at this point the long-haired character in the ad looks nothing like him, - or any other actor to have played the part so far! Come to think of it, the Daleks seem to have gained an extra bit of equipment on their heads from the Ann Summers catalogue.

Batman was one of the biggest tv hits of 1966 so what better Christmas present than a Batman Play Outfit? I had one of these as a present back then and, much as I liked it, a Batman costume it was not. The "jacket" was bright blue which tied at the sides and had "Batman" in yellow letters on the chest, the "cuffs" were just that, not gloves, (but they did have the distinctive half-moon shapes on them), the utility belt was white with no pouches, and the mask was a plastic affair that covered only the front of the face. The cape was pretty good though, albeit only waist length. 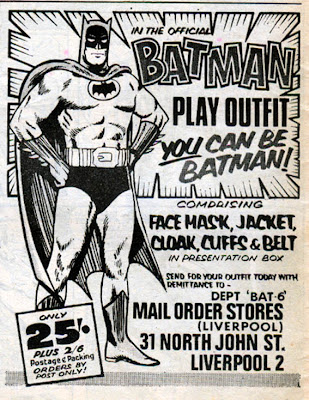 The Man from U.N.C.L.E. was another smash hit tv show of the era and this U.N.C.L.E. Kit promotion must have shifted loads of toothpaste and shampoo. Male grooming had arrived, and what better incentive could there be for kids to smarten themselves up than to pretend to be a sixties super spy? 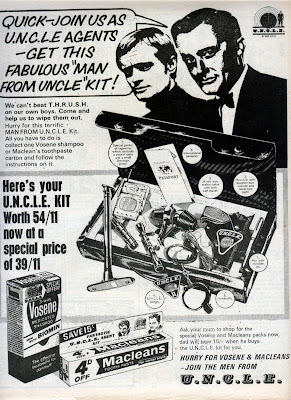 The biggest toy of 1966 must be Action Man. This ad shows the very first design, which was literally a copy of the American G.I. Joe figures. (The first Action Man dolls were in fact Hasbro G.I. Joes re-boxed by Palitoy, with permission of course.)

The huge success of Action Man inspired numerous imitators. Tommy Gunn (not shown) was the closest, but Louis Marx got into the act too with a range of figures. This ad shows two of the dolls for Christmas 1967; Johnny West and Chief Cherokee. Neither had the number of articulated joints as Action Man, and their bodies had the clothes molded into them, but they were still popular toys, - and you could buy a horse accessory, - something Action Man didn't have. 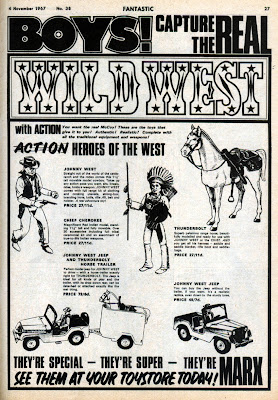 Another Louis Marx figure was Mike Hazard, Double Agent. I had one of these and it was great as it came with various disguises (shown in the ad) and a bomb in a toy suitcase (it went "bang" if you put a cap in it and threw it). Imagine the outrage if that toy appeared today. 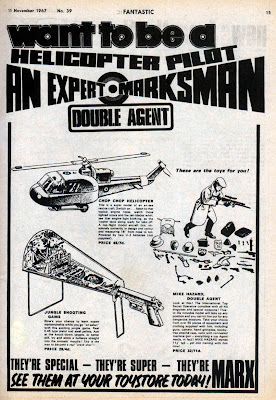 Airfix often advertised in the comics and, as this ad shows, they didn't only do model kits... 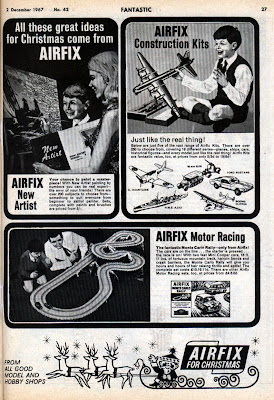 One day it might be worth collating all the ads that appeared in strip form, but here's a handful for now, starting off with a bubble gum ad with Anglo Ace, obviously inspired by the work of Roy Lichtenstein... 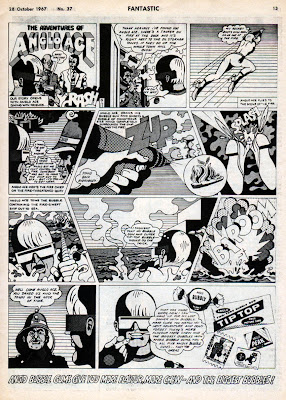 A series of Inchman strips appeared throughout 1967 promoting Dinky Toys. Here's a couple of them, with artwork by Brian Lewis showing what a skilled artist he was... 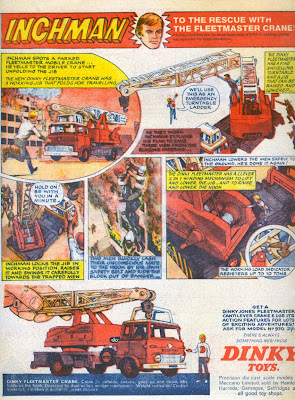 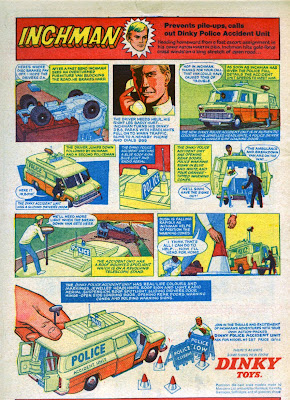 Back to lollies again and here's a fun promo for Wall's Woppa. I seem to recall an animated cartoon in this style appeared in the tv ads for it... 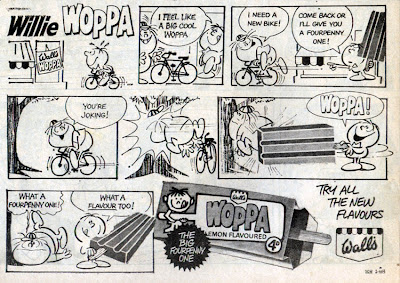 T.N.T. Tim is a strange strip. Promoting Wayfinders boots it tells of a "gigantic fox" that has stolen a baby and taken it to his den "deep into the woods". Luckily for the baby, the hero of the strip literally sticks the boot in and apparently Wayfinders are too tough for a fox to bite through. The final panel is just as barmy: "Don't thank me, thank my Wayfinders boots". 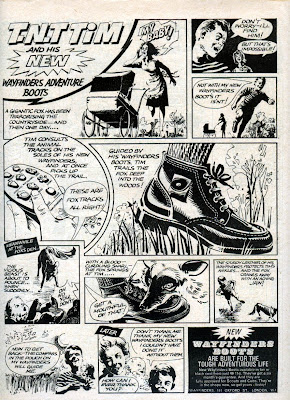 More blasé attitudes to wildlife in this ad for Weetabix with an offer for a game enabling kids to pretend to kill endangered animals. The Sixties were a time of peace and love you know... 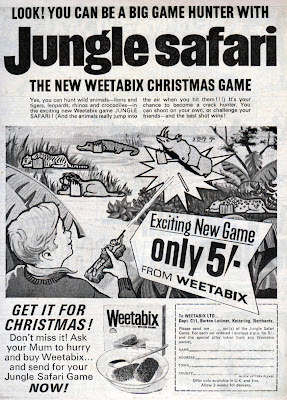 After all that fox kicking and rhino shooting it's time for a cuppa. You'd think tea would be an unlikely thing to advertise in children's comics, but in 1967 Ty-Phoo were running an offer for colour photos of top footballers, so with George Best the hero of every aspiring footballer back then it made perfect sense for Fantastic to advertise tea on its back cover... 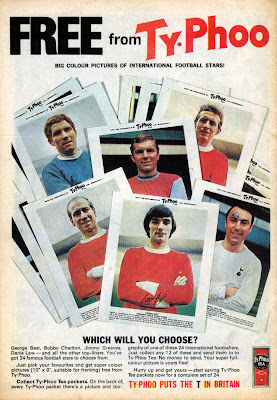 I hope you've enjoyed these recent blogs on old ads. Although not entirely strip-based they do tap into the same era of nostalgia that many of you remember so hopefully they've brought back a few memories, and provided a bit of history for younger visitors to this blog.

Thanks for these, great piece. The adverts are a big part of the fun in reading older comics.

Aye, remember the Airfix ads with chairman of the fanclub Dick Emery?

I fancy sending off for that Batman one, shame they prob won't accept photocopies! The famous one has to be the Atlas advert complete with story of a how an insult made a man of a weed! How many times has that one been parodied?! Nice post Lew

For some reason Anglo Bubbly was my favourite bubblegum.

There's a PDF file with a lot more of that Sky Ray promotion (including all of the cards, the accompanying book, the packaging of the lolly, and several adverts from comics, and a storyboard for the TV commercial, which is another of the bonus features) on the Tomb of the Cybermen Doctor Who DVD. It explains in an introduction page that Wall's couldn't get permission to use either Hartnell or Troughton's likenesses, so the artist created a composite (well, the hairstyle is a mix of the two anyway). The promotion was halted at the end of 1967 because of Terry Nation preventing the BBC from exploiting the Daleks any longer (same reason they were absent from the show for several years).

Thanks James. That's very useful info. I thought I had the Tomb DVD but perhaps I'm thinking of the VHS version which of course didn't have the PDF. Anyway, I didn't know that info so thanks again.

I too had the Batman "costume" for my birthday I think - it was as you described and was a major disappointment. I guess there were no trading standards then. How on earth they got away with it I will never know

I didn't mind really. I was grateful for anything Batman related when I was seven. There's a photo online somewhere of me wearing it.