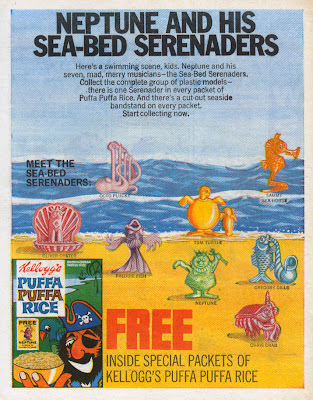 As yesterday's blog was so popular here's another rummage through adverts that appeared in comics in the early 1970s. Above is an ad for Kellogg's Puffa Puffa Rice which if memory serves me correctly was quite a sickly tasting cereal. Free gifts in cereals were a great way to get kids eating breakfast and these small plastic figures were quite sought after. (I still have a few somewhere and will add a photo to this blog when I find them.)

Puffa Puffa Rice may be long gone but Kellogg's Frosties are still with us. Back in the early seventies it offered a free gift to attract stamp collectors. (Do kids still collect stamps today or are they all mature philatelists?) 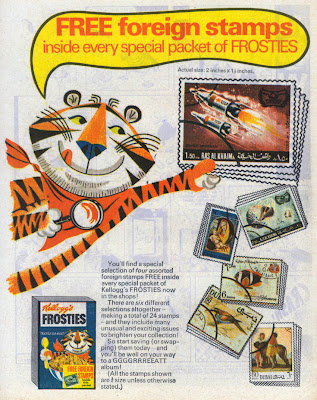 Spear's Games were the manufacturers of several relatively cheap games that were ideal as stocking fillers at Christmas. This ad is from 1972 but they'd been advertising Mousey-Mousey in comics for years earlier. 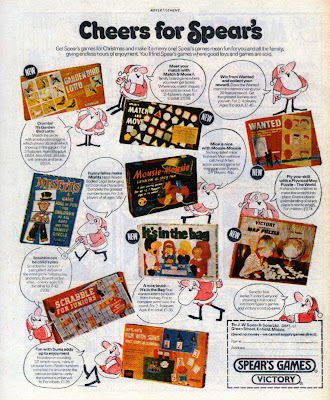 The ABC cinemas of the time had, for decades, been running Saturday morning matinees for the kids. These shows running for 2 or 3 hours would feature cartoons, a 1930s serial (usually Flash Gordon) and a main feature (usually a movie from the CFF - Children's Film Foundation). Admission price was 6d (2 and a half pence) in 1967 but I see from this ad that by the early seventies it had risen to twice that, - a whole 5p for a morning's entertainment (or free with this coupon). Similar matinees still exist today, but only with parental supervision due to 21st Century paranoia. Presumably such over-cautious parents wouldn't buy their kids the junior power drill advertised here either. 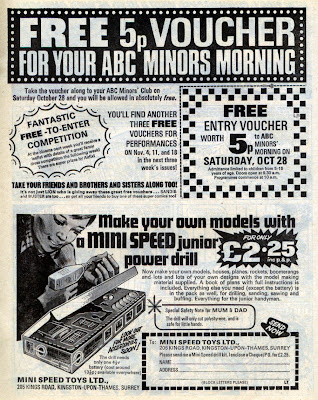 Advertisements in comics often used the language of comics to promote their items, such as the superhero influence in these badges from Curly Wurly... 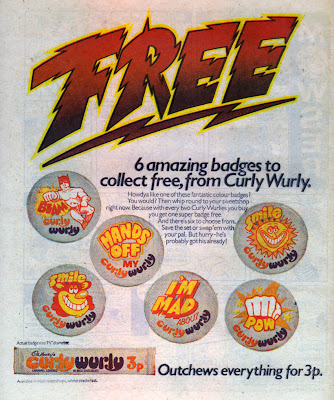 ...and in the speech balloons and special effect lettering in these two ads... 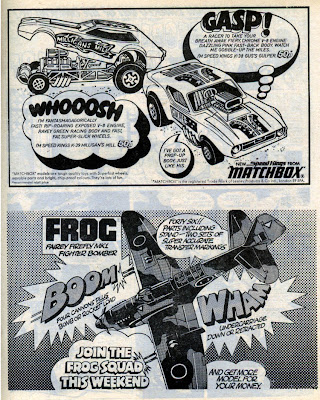 ...the dramatic layout of this Airfix ad resembles a comic page in its execution... 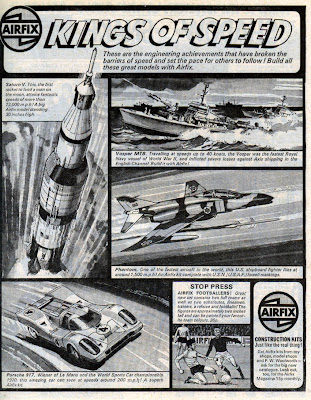 Comic strips themselves were sometimes used too, often quite crudely but they did the job... 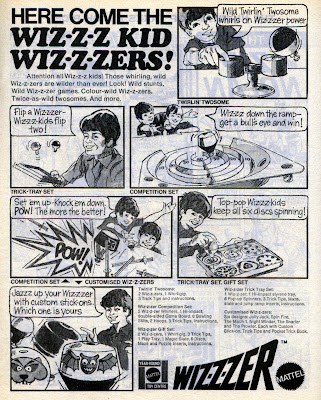 This recruitment ad for the Royal Marines is nicely produced, but the ethics of encouraging children to consider military service by depicting it as an exciting adventure are debatable. Thankfully such ads no longer appear in British comics, although that is partly due to comics now being pitched at a younger age than they were 40 years ago. 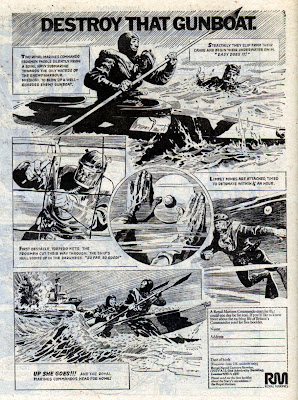 A long running series of ads in strip form was Clarks Commandos, which promoted Clarks shoes. Illustrated by Tom Kerr, one of IPC's top artists, these serials were more interesting than some of the regular strips! (To see more of these strips visit Steve Holland's blog here:
http://bearalley.blogspot.com/2009/12/clarks-commandos-series-6-part-2.html) 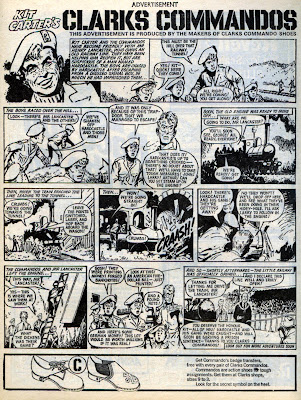 More ads from the comics will appear here at a future date, looking at some from the 1960s.

I wonder how many kids the Royal Navy ad actually recruited.

As I recall, ads in comic strip form for all the armed services - and the police - were quite common back then, so they must have had some effect.

I wonder if the MoD have ever considered putting ads in computer games like Tour of Duty? That would be the natural progression from these I suppose.

I'll have to show some comic ads from the 80's and 90's my era for fun at my blog..like Trio advert..
the 70-'s advert showing mousey mousey game from Spears..I got that from my Aunty for Christmas!!:))

"I wonder if the MoD have ever considered putting ads in computer games like Tour of Duty? That would be the natural progression from these I suppose."

I doubt it. The military like their ads to show service as an adventure or a career. They tend to steer clear of the realities of conflict and death.

looking through these ads Lew, I remember having a large percentage of the toys on offer. I shall now have to call my parents and apologize profusely. I also remember the ABC kiddie matinees, the ABC cinema was on the corner of George Street and King Street in Luton town centre. My first encounter with Flash Gordon, King of the Rocketmen and the CFF.

I doubt he MOD would really consider targeting adverts to lard-arsed nerds who and computer fantasists.

I'm no fan of the army per se, but even they must realise kids on a diet of cartoon violence and pot-noodles aren't really going to be very good at dealing with roadside devices in a warzone.