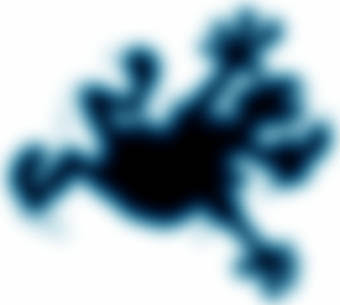 A few days ago I hinted at a new strip I'm doing for the revamped Dandy. To retain some mystery I showed a blurred silhouette of the character on this blog. The character's name begins with 'P' so I labeled the image blurP.jpg which was sufficient for my own files I thought. I mean, it's not like I was sending it to anyone else, so as long as I knew what the prefix meant, no problem. Right?

Yesterday Rich Johnston posted news of the new Dandy on his Bleeding Cool site. All well and good and very much appreciated, making his readers across the globe aware of the news as they're mainly fans of American comics and may otherwise not have known of it. However, either Rich or his source had copied the image from my site and had obviously perceived the jpeg name literally, announcing that I was doing "something called blurP"!

Then Digital Spy picked up on the Bleeding Cool report and told the world I'm doing a strip called Blurp! Other sites are now copying that news. (Update: Digital Spy have now removed mention of the non-existent strip.)

Just to put the record straight, my new strip is not called Blurp or anything remotely like it. Nor does it feature a character who is a blur, as someone else thought.

The real name and nature of the character? You'll have to wait a little while longer for that, and for the title of the other strip I'm doing for The Dandy as well. (Yes, I have two brand new strips starting next week.)

Nerds love lists, love things to have precision so they will take everything literally.Think yourself lucky you didn't put something worse on that jpg. :-D

For the want of a dash (blur-p) the name was changed!

I imagine you'll be very cautious next time!

What's amusing is that someone obviously thought they were being very clever in sussing out the character's identity. If they'd just checked with me first, instead of being sneaky, it wouldn't have happened. :-)

I'll definitely be picking this up Lew! Congratulations on drawing for the Dandy! :o)

Lets hope the two strips help bring the Dandy back to it's former level else it seams the world's third longest running comic is going to come to an end.

Hey, wouldn't it be funny if it turns out that Pansy Potter is moving from the Beano to the Dandy and that was the character starting with p ^_^

Great news you are having two strips...will we see the blur of that character as well soon..? Not that I can work out what it is?;)

I'd better not cause any more confusion Peter. :-) No more clues. Only a week to go before the comic comes out anyway so I'm sure there'll be items in newspapers about it soon.

Digital Spy have corrected their mistake after I emailed them a link to this post last night.