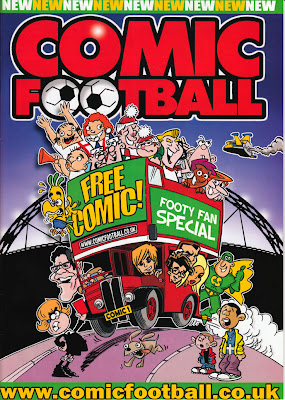 Launching a new comic these days is a very risky business. Sales of all periodicals are gradually falling, retailers have more power over the sort of comics they stock and they charge enormous fees just for shelf space (that's before they take their cut of the cover price). There are also distribution costs and other overheads on top of print costs and contributor rates.

Small wonder then that most publishers are reluctant to try anything other than recognized brands or licensed merchandise tie-ins. All is not doom and gloom though. We have Strip Magazine coming in October, The Phoenix in January, and, right here, right now, is the new children's humour title Comic Football. 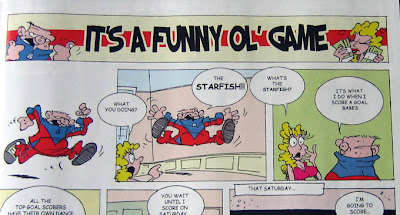 The brainchild of Pete Wildrianne and Clive Ward, Comic Football has its origins in a comic called Rammie which I covered here on this blog three years ago. Rammie was a comic sold at the Derby County matches and had limited distribution to newsagents. A similar title with some of the same content rejigged was used in Wolfie a comic for Wolverhampton Wanderers. Comic Football is a more general purpose football comic and is only available at present by subscription.

"We are looking at other outlet opportunities though not the conventional
news trade route at the moment" said Pete Wildrianne. "We launched at the Grass Roots show at the NEC last weekend, and distributed about 4000 comics to kids and parents." 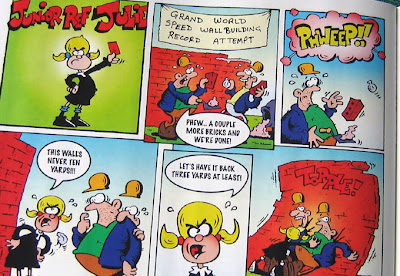 It's quite understandable that publishers want to avoid the costly middle men of the retail trade but The DFC was also limited to subscription-only and that didn't really work out too well. Can Comic Football expand beyond that? "We are also looking to wholesale the comic to local junior football clubs" continued Pete Wildrianne. "They can then sell to their players and the profit goes to funding grass roots football. This is receiving a lot of interest, and we are exhibiting at two further major shows this month which target junior managers, coaches etc. We have also linked up with a company who provide fundraising nights for clubs, and another company who hold events across the country promoting street football."

So what's the comic itself actually like? Well, it's a nice 32 page A4 glossy package and features professional work from Karl Dixon, Nick Brennan, Duncan Scott, Nick Miller and others. There are 14 strips in total, ranging from one to three pages in length, and two of them are serial strips. The editors previous experience on Rammie has served them well and it looks a smart package easily on par with any comic on the stands. 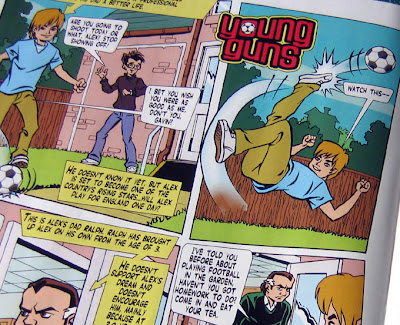 Would you like a free sample copy of the issue shown here? You can download a digital version or order the paper copy from the Comic Football website. Give it a go and support UK comics:

The website also gives you details on subscribing to the comic. It's just £9.99 for six months (six issues) delivered free to your home, or 12 months for £19.50. Remember, Comic Football is not available in the shops so at present this is your only way of obtaining copies.

The comic itself looks great. And there's definitely a hole in market for a footy comic for kids... I hope they find a model that works for them.

Why am I getting this? Cos it sounds brilliant, ANOTHER children's comic, yippee! The price is a bit unfair though, £2.50? Ah well... I'll just subscribe... Will it be in shops?

My favourites so far are Junior Ref Julie, It's a It's a Funny Ol' Game and the Ref mini strips. :)

This is excellent news- they have a great roster of cartoonists. And it's £1.66 a month- hardly extortionate! Looking forward to seeing it.

Harry, I'm sure it didn't escape your notice that Beano and Dandy artists are involved.

Lew's right, even those issues with gifts and the higher price tag are still as cheap as their competitors. Beano and Dandy are the cheapest comics available, you can't expect others to be as cheap. Yet that subscription price almost is.

Bad news, looks like it only lasted three issues before getting suspended.

It's hard to maintain a subscription-only comic on a professional level. Let's hope they can relaunch it again later.