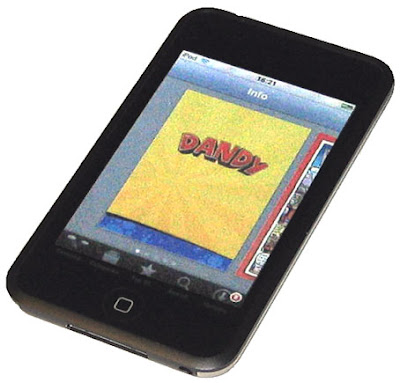 You can now buy The Dandy and The Beano to read on the iPhone or the iPad reports Scotland's Courier newspaper.

The comics are now available on the App Store as an alternative to buying the long-running paper editions. It's a far more convenient and, perhaps, more reliable way of obtaining the titles than hunting them down in newsagents. Mike Stirling, editor of The Beano said "it guarantees our fans can enjoy The Beano 24/7".

I think this is a welcome move by DC Thomson that should be applauded. With an increasing problem of poor shelving displays in newsagents and the simple fact that many children just don't look for comics on the stands any more, digital editions are a good alternative to offer them.

The App requires iOS 3.2 or later.

Email ThisBlogThis!Share to TwitterShare to FacebookShare to Pinterest
Labels: Dandy, The Beano

Coming fast on the heels of the digital versions of Commando and Strip, this is excellent news. Just need Clint and Comic Heroes to make the move to digital and I'm well happy.

The cynic in me hesitates, remembering how US comics swapped the traditional news outlets for the direct market in the 1980s , ultimately leading to the ghetto-isation of comics and the current diminishing circulations. You could also question the wisdom of breaking the stranglehold of the newsagents and supermarkets by a Faustian pact with one of the world's most powerful companies.

But on the whole I have to see this positively - I've been asking for this since the iPad launched so I'm off to sign-up to them both.

You're always banging on about how these comics are for children Lew but how many kiddies own an iPad or an iPhone? Not many I'd bet. If the publishers are going to circumvent the proper outlets of newsagents they should make the comics available to read on a PC or I predict this will be another doomed venture.

I don't think I "bang on" about it Anon. It should be fairly obvious that their main readership is children. Fair point about the iPad though, but this is still something worth trying, yes?

I know anecdotes are no substitute for empirical studies, but two of my nieces, both under 10, had their own iPads and iPhones before I got mine. Not that either of them are big comic readers, but they're more likely to try something new on the iPad than search the shelves of WH Smith

Just tried the beano version - its a good quality app and comes with 5 free copies (from October). I think they are to be applauded and wish them a great success. I'm not a regular Beano reader but did used to pick up the comic classics title - I hope they start including select 'back issues' for purchase (plus I'll probably indulge myself now an again for special issues e.g. the Christmas edition) :-)

Oh and Tony, I think Comic Heroes is in the ipad newstand already, along with most of the other future magazines portfolio.
Scott

That's right Scott. Comic Heroes is already an App for the iPod Touch and iPad. Can't download them myself as I only have a 1st generation iPod Touch which can't be upgraded to the newest OS.

I hope they have an Android app/edition coming... :)

Scott - thanks for the heads-up on Comic Heroes. I downloaded that at the weekend along with a special offer on issues 1 to 7.

It's like the future has finally caught up to me !