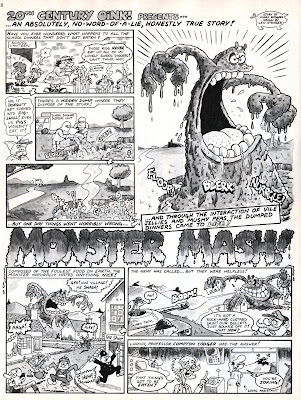 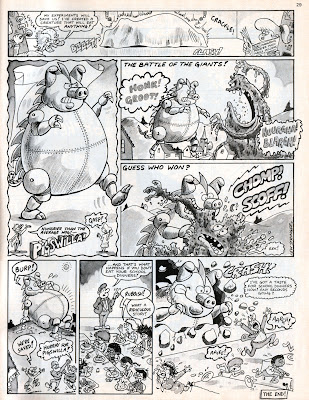 One of the enjoyable things about working for Oink! comic back in the 1980s was the opportunity to do numerous one-off or short run strips as well as regular characters. Monster Mash appeared in Oink! No.13, the Halloween issue for 1986, and was a collaboration between editor Mark Rogers and myself.

Mark had originally sent me an idea for a story called The School Dinner Monster and asked if I had any ideas to add to it. I added a few bits and bobs to the plot and dialogue, and thought the title Monster Mash was catchier. I gave the name 'Pigzilla' to the giant robot pig, although Mark changed that to the much more inspired Pigswilla.

As Oink! was printed on quality paper (as opposed to the newsprint of its companion comics Buster, Whizzer & Chips etc) I knew we could be a bit more adventurous with the rendering of the artwork so I thought a grey wash would give it more depth. I was really pleased with how the strip turned out and it remains one of my favourite pieces 25 years later. The artwork is a bit rough in places but I'm still happy with it.

I felt that with Monster Mash and some of the other material that myself and other contributors did for Oink! that we were stepping outside the usual conventions of British humour comics and moving away from the standard schoolkid-with-gimmick that had dominated IPC's comics since 1969. And we were all having great fun doing it. This comedy-adventure, comic horror stuff was what comics should have been doing more of in my opinion.

As it turned out, it seemed most readers still preferred the more traditional schoolkid strips, and Oink! folded after just two and a half years. Then again, Whizzer & Chips folded a few years later, and that was the most traditional "safe" comic in IPC's stable. Perhaps it was just a sign that readers were being distracted by video games.

Pigswilla returned for two or three more complete stories during the run of Oink! and I'll show them here at some point in the future.

Maybe in the future you could draw comic horror stories for The Dandy..a bit like the one called The Rocky Horror show...which is a great new one for The Dandy..

One thing Oink did was move towards comedy-adventure material (Steeet Hogs, Hog of the Baskervilles, Ham Dare etc). I also did that with Combat Colin for Marvel, and of course people like Leo Baxendale and Mike Higgs preceded us with Eagle Eye and The Cloak.

We hoped that was the direction UK humour comics might take, but they continued along the traditional path of single page funnies. Much as I enjoy doing those single pagers too it's a shame that British kids never really took to humour strips with a bit more of an edge/depth, like European and Japanese kids did. Perhaps one day..

Oink! Wow, that takes me back! I remember the humour in it was more gross than other comics, until Viz came along. I think I remember an alien who could vomit out his internal organs at will and throw them around, spraying slime everywhere?

To be fair, Viz predated Oink by several years.

Regarding the strip you mention I think you must be thinking of Burp the Smelly Alien by Banx. Brilliant strip.

I thought Viz was later, shows what I know! Yeah, the alien was called Burp, I remembered just after I'd typed that comment. I can even remember the stickers that came free with one of the issues, mainly depicting evil butchers. Ahh, good old nostalgia.

Believe it or not, Viz has been around since 1979:

I was thinking more along the lines of humour strips that had character development and continuity of sub-plots, rather than just being cliffhanger serials where everything is reset at the end of each story.

I hope I accomplished that with Combat Colin to some degree. Over the years I introduced a wider supporting cast, references to previous adventures, sub-plots etc.

Most humour comic serials can be read in any order because the status quo is resumed at the end of each adventure. When/IF I ever get around to publishing the Complete Combat Colin you'll see that most of my serials have to be read in the order they were published because of the continuity developed over the years. (Mike Higgs had done the same to an extent with The Cloak, - the strip that was a big inspiration to me when I did Combat Colin.)

I know what you are saying about experimenting in Oink with things like tone and that and they were very keen for you to do that. I did a Christmas Cowpat County using
a product called Duotone, which was beautiful to use, but costly
(Eh? A costly art product?!Shock!Horror!).Bryan Talbot used it in his 'Sloth' story in Knockabout's 'The 7 Deadly Sins'.
They had art by some guy called Lew Stringer and a script by Davy Francis.Oh,and a couple of other guys-Alan Moore and Dave Gibbons.Whatever happened to them?

I have such fond memories of Pigswilla. Really. I've got some fan art I drew when I was 9 somewhere. Also, JT Dogg's art on Street Hogs which you mentioned was amazing.