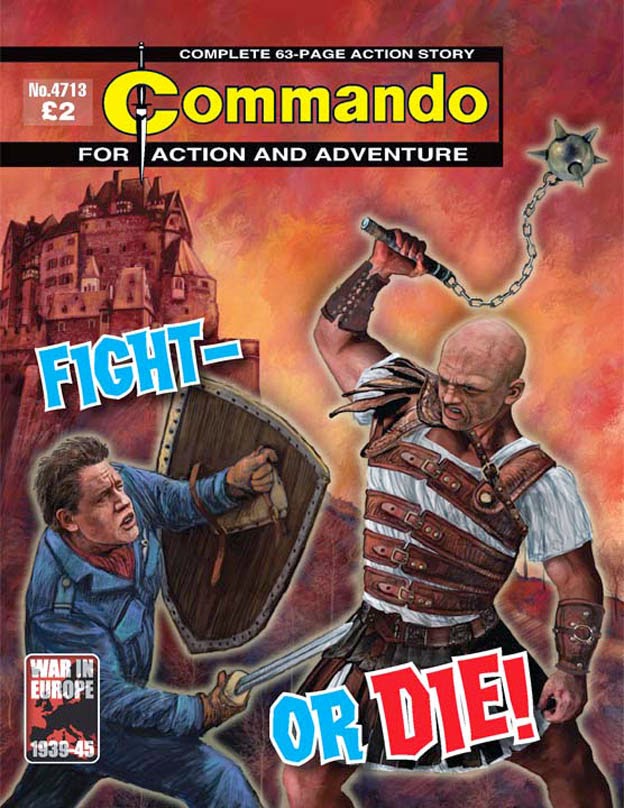 Four issues of Commando will be in the shops on June 5th. Two brand new 63 page stories plus two classic reprints. My thanks to DC Thomson for the info and cover images....

Commando No 4711 – Firestorm In Flanders

On the morning of the 28 June 1914 two pistol shots fired in a Sarajevo street had plunged the world into war and pitched men of all nations against one another.
Two years later, pursuing victory at all costs, man’s ingenuity had developed more terrible weapons. Yet the war in the west remained static and soldiers old and young had to face death every day.
This is the story of one of them, Sergeant Brian Wade.

Four outcasts, four men despised and shunned by their fellow soldiers — because their fame and prowess as boxers kept them safe, far from the front line…
Here is the story of how one fighting sergeant licked all four “champs” into shape, and showed them that you can’t win wars with your bare fists!

The author of this tale, Eric Hebden, joined the Royal Artillery well before the outbreak of WW2, serving right through that conflict in an Army career spanning some 25 years. After he left the service, he took to writing, penning some 130 or so stories for Commando. He wrote for other comics, but we’ll gloss over that. The reason for mentioning these details is to give you a clue that all the books he scripted have an undisputable air of authenticity about them, an atmosphere he transferred from his Army life. It adds an indefinable extra to the story.
I don’t know about Mr Barr or Snr Cortes’s military service but their cover and inside art certainly do justice to this classic Commando.

Minutes after Flying Officer Bill Foote bailed out of his damaged Hawker Typhoon over Germany he was a prisoner-of-war. Soon he was on his way to Dunsberg castle — a place like no other Stalag…
There his captors enjoyed a barbaric sport — in a gladiatorial arena where prisoners fought to the death against a merciless Nazi champion.
Bill knew that his turn in the arena would come. Soon he must
FIGHT — OR DIE!

Jean D’Arton of the Free French Army had watched the giant railway howitzers plummet to destruction and was convinced these devastatingly powerful weapons were out of the war for good.
Now, though, information from the Resistance suggested that the Germans had salvaged at least one of these titanic guns.
And with the Allied invasion of France due any day now, Jean just hoped these reports weren’t true.

A long time staff artist, Jeff Bevan painted many Commando covers, as well as illustrating for several boys papers and comics. Mr Bevan was the go-to-artist for maritime pics in particular but, like all good illustrators, he was versatile and could do turn his hand to anything.
His covers had a fairly offbeat look about them with unusual compositions and colours. Here he has surpassed himself — a lurid, all-encompassing red, and the Railway Gun is almost 3D and practically about to edge its way out of the page. For an action cover, I don’t think you can ask for much more than that.

I was never much of a fan of war comics and always preferred Marvel (apart from Fury) but that's a fantastic and intriguing cover - I thought somebody had gone back in time to ancient Rome or something until I read the post below.

Yes, it's an unusual cover for Commando so I thought it'd look dramatic as the main image for the post.

I've never liked war comics either, except for Charley's War which is anti-war. I post the news about Commando because I know some visitors to this blog are interested, although these posts never get the same number of hits as others. Presumably that's because other blogs also carry the same press release so some readers have already read it elsewhere on Down The Tubes etc.

I am always a bit confused by Commando's frequency. I had thought it was four original and four reprint, but your listing would suggest 2 original and two reprint per month, is that correct?
I have over the years built up a lot of Commando, Football and Starblazer monthly, I have always liked DCT libraries.
I still occasionally pick up a copy, especially if its a bit off the beaten track, or if its by by John Ridgeway, who is always worth a read.

Commando is fortnightly. They publish four issues every other Thursday, so 8 a month, 4 of which are reprint, so I was only talking about this week's batch. Sorry for any confusion.

I pick up the odd "Commando" time to time.
The one with the gladiators looks interesting.