Thunderbirds in the comics 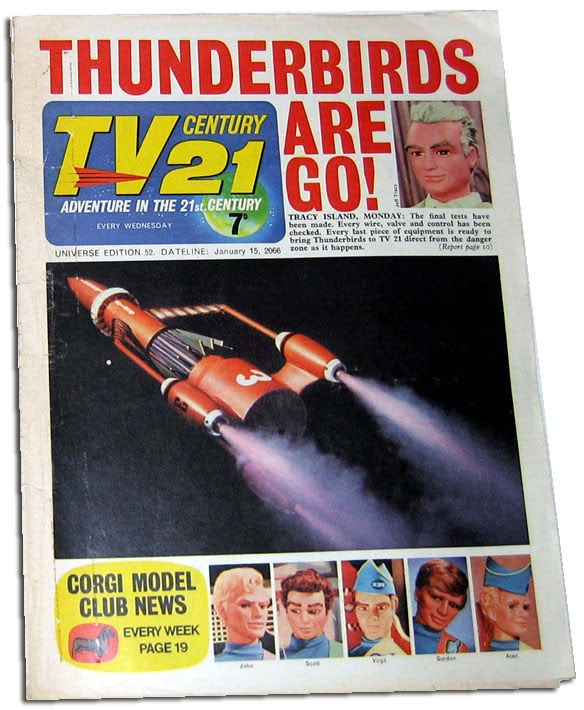 Unless you've been living on Mars (with those pesky Rock Snakes) you probably know there's a brand new Thunderbirds series coming to TV this Spring, entitled Thunderbirds Are Go. A mixture of CGI and models it promises to put a new spin on the old favourites but remaining true to the basics.

What you may also know is that last October it was announced that DC Thomson will be publishing a monthly Thunderbirds Are Go magazine this year, plus an annual. Thomsons are being very hush-hush about it so there's no news on contents or publication date as yet but I'll post info as soon as I get the go ahead. (Although you'll probably hear of it elsewhere first.)

This isn't the first time there's been a Thunderbirds magazine of course. The series has a long association with comics, dating back to TV Century 21 No.52 in early 1966 (cover above) which featured the first Thunderbirds comic strip illustrated by the great Frank Bellamy... 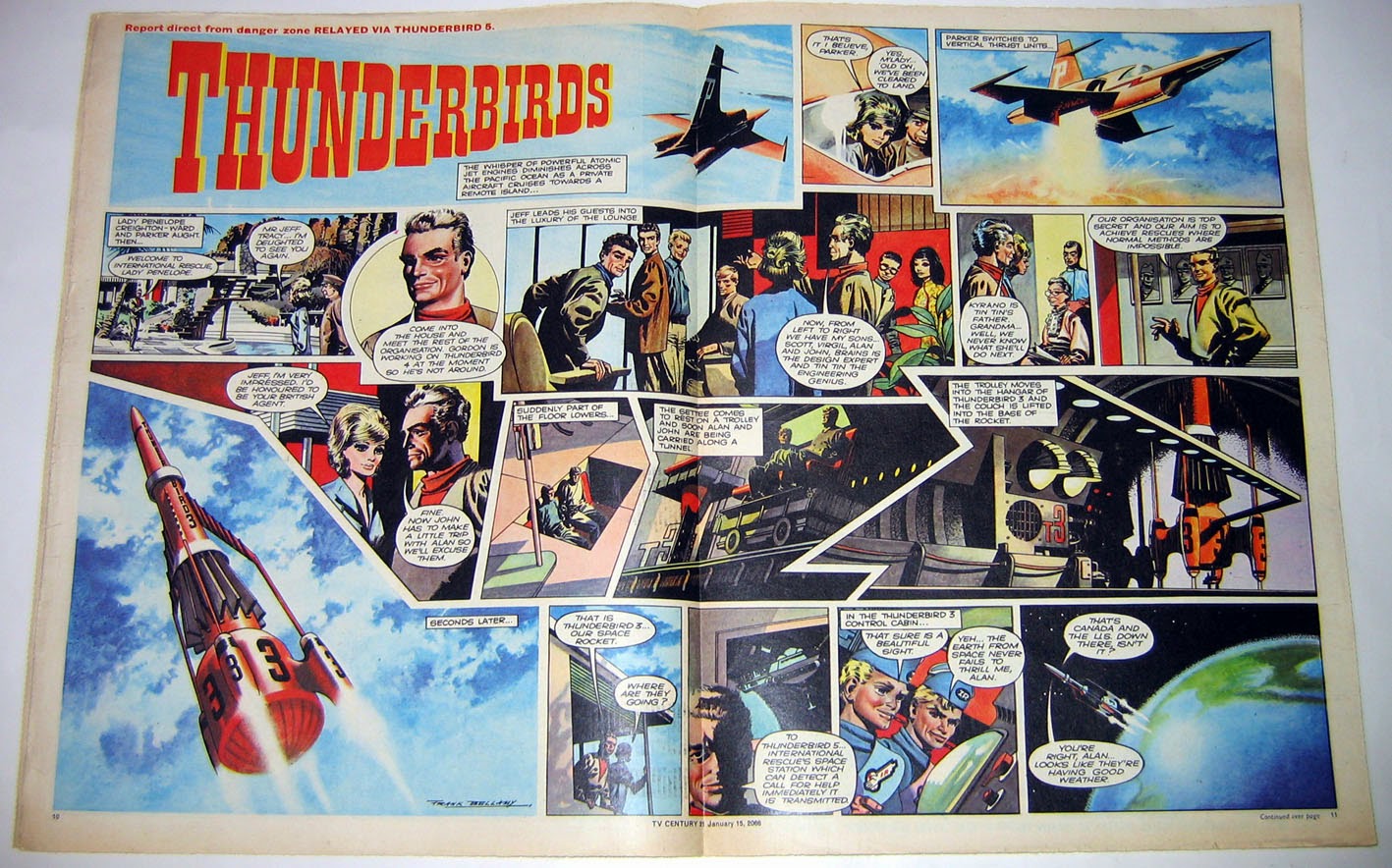 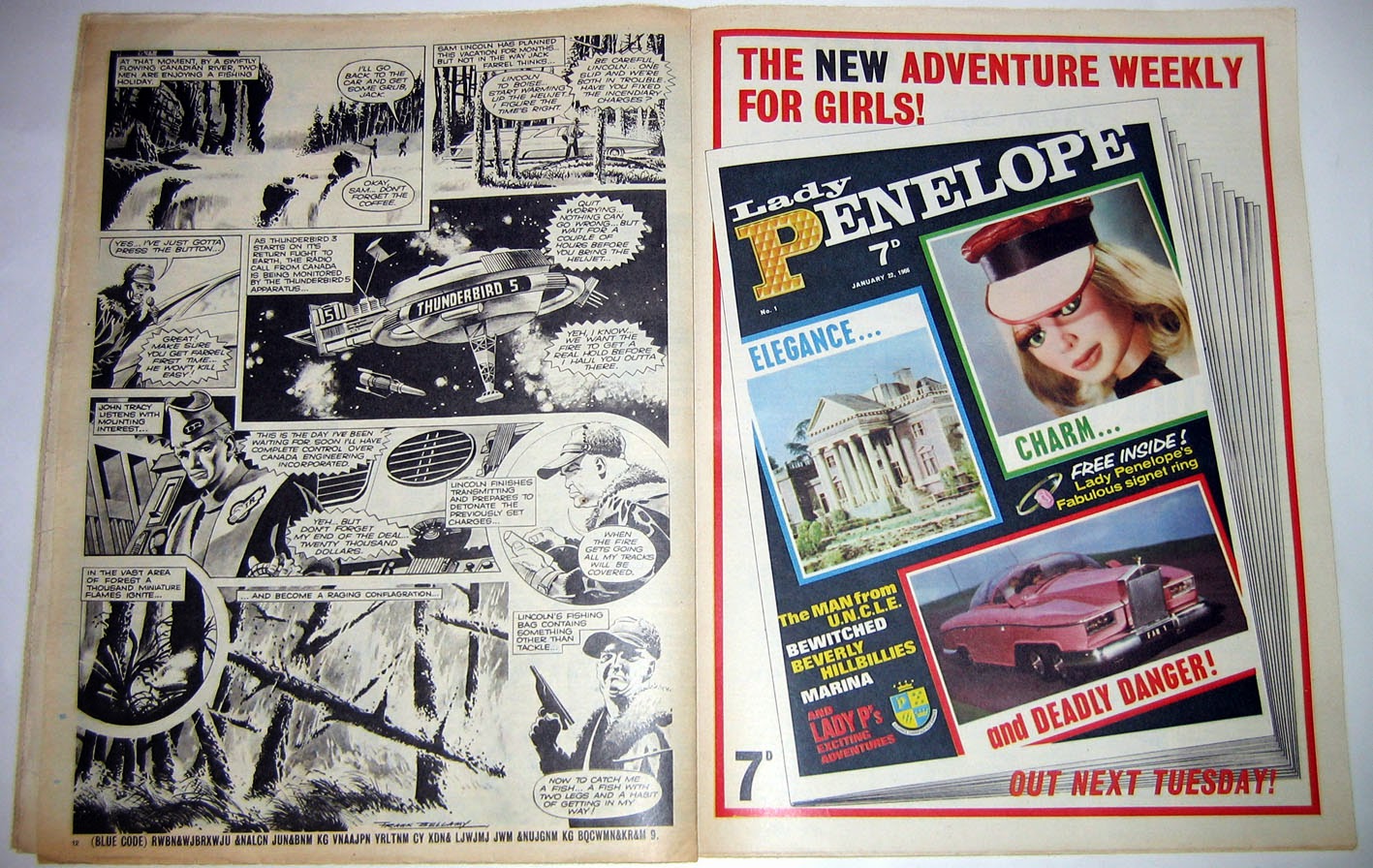 The Thunderbirds strip replaced the Lady Penelope strip (which had been running in TV21 since issue 1 in January 1965). However this heralded a promotion, with Lady Penelope gaining her own weekly publication.

Thunderbirds became a major part of TV21 but never had its own ongoing comic at that time, although in 1966 there was the Thunderbirds Extra, a 48 page glossy one-off which effectively was the first Thunderbirds solo comic... 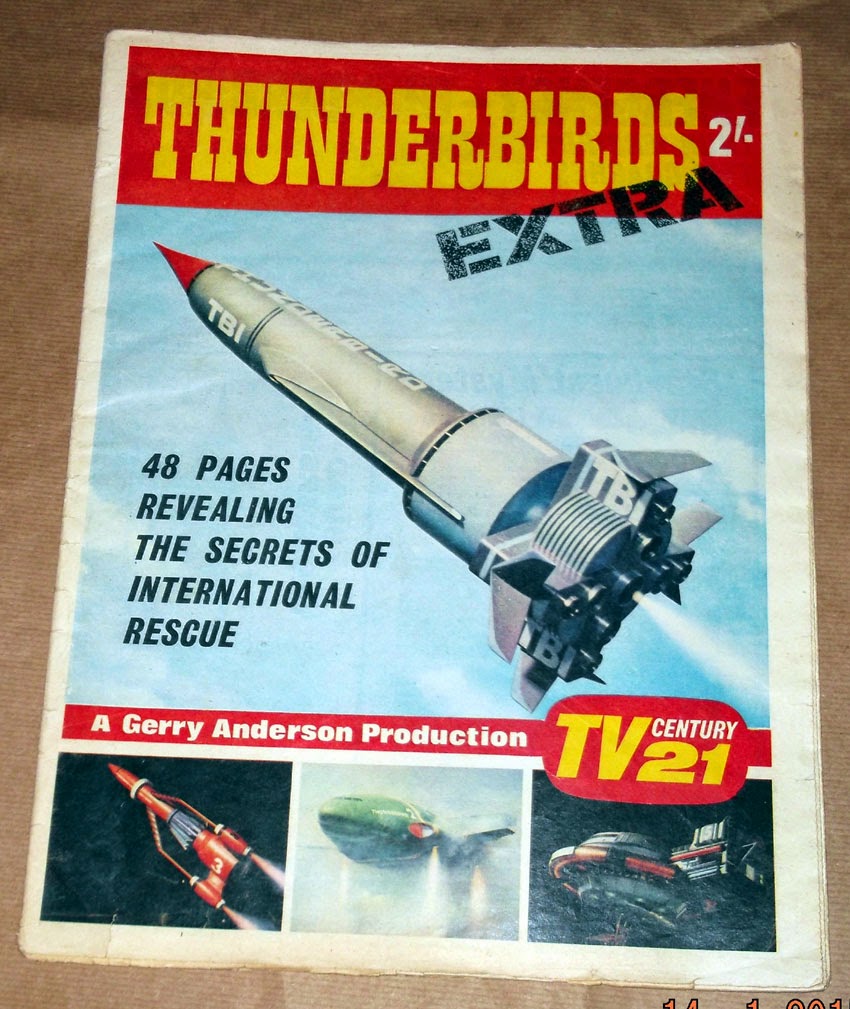 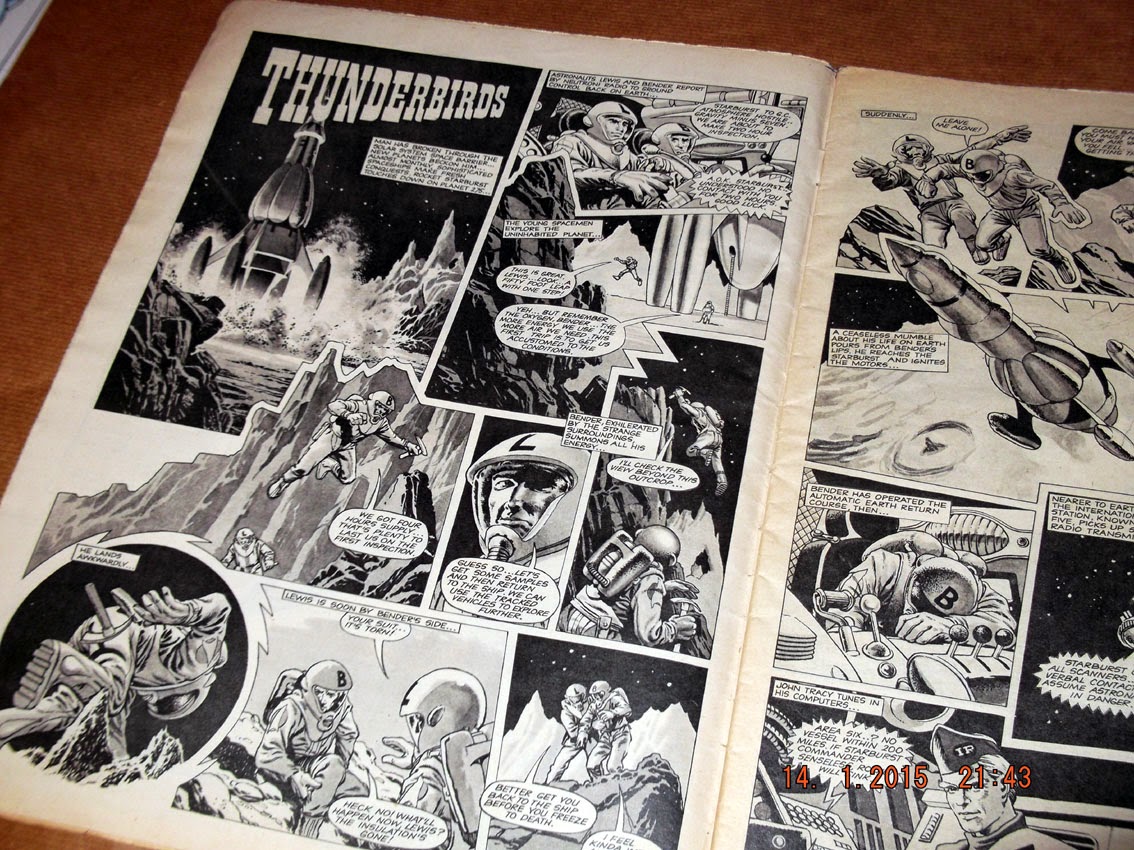 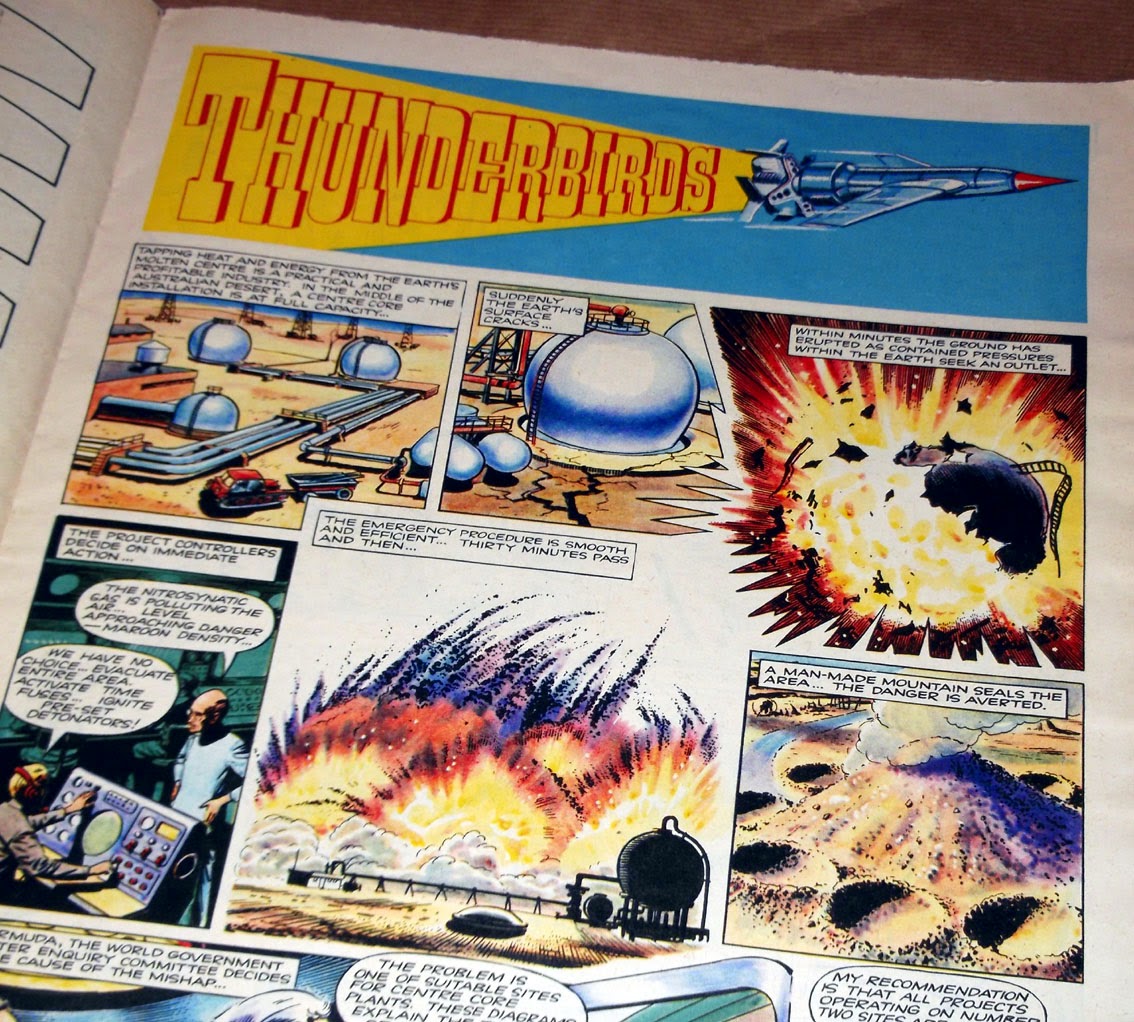 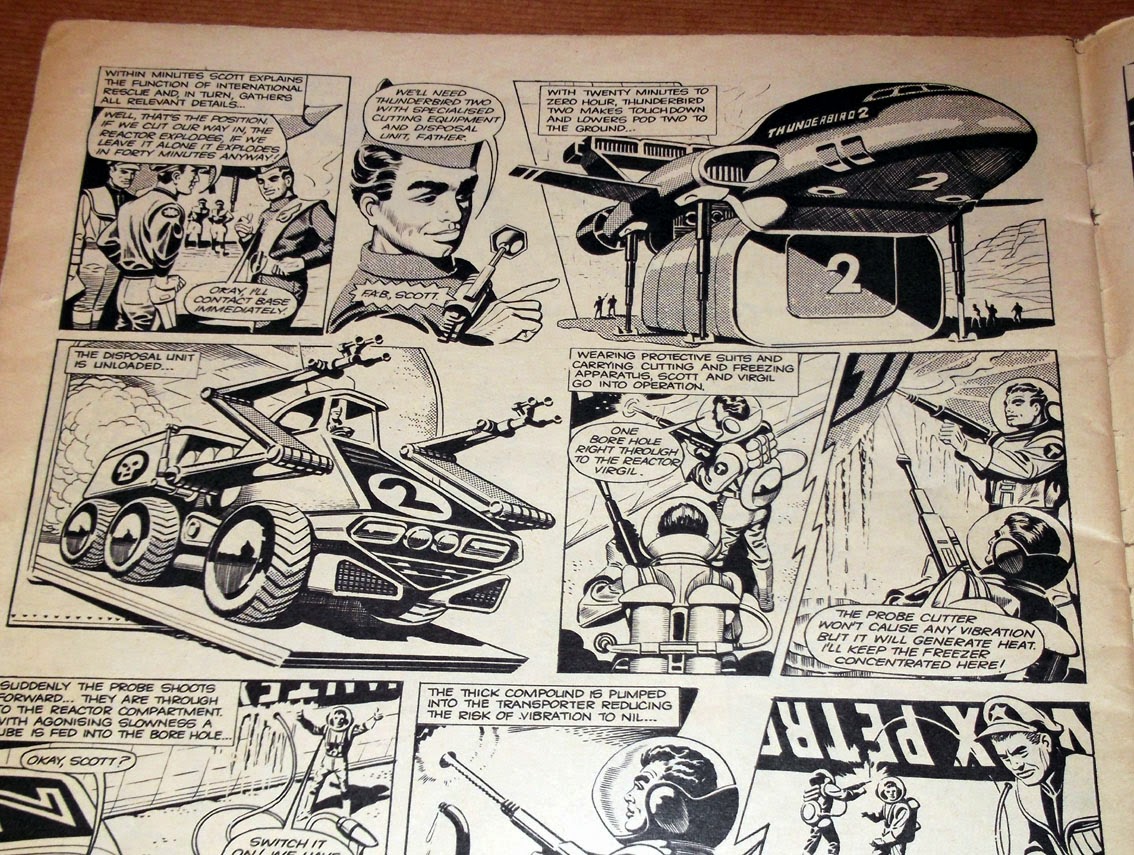 There were other Thunderbirds specials and annuals of course, but I'm mainly focusing on the regular comics for this post. 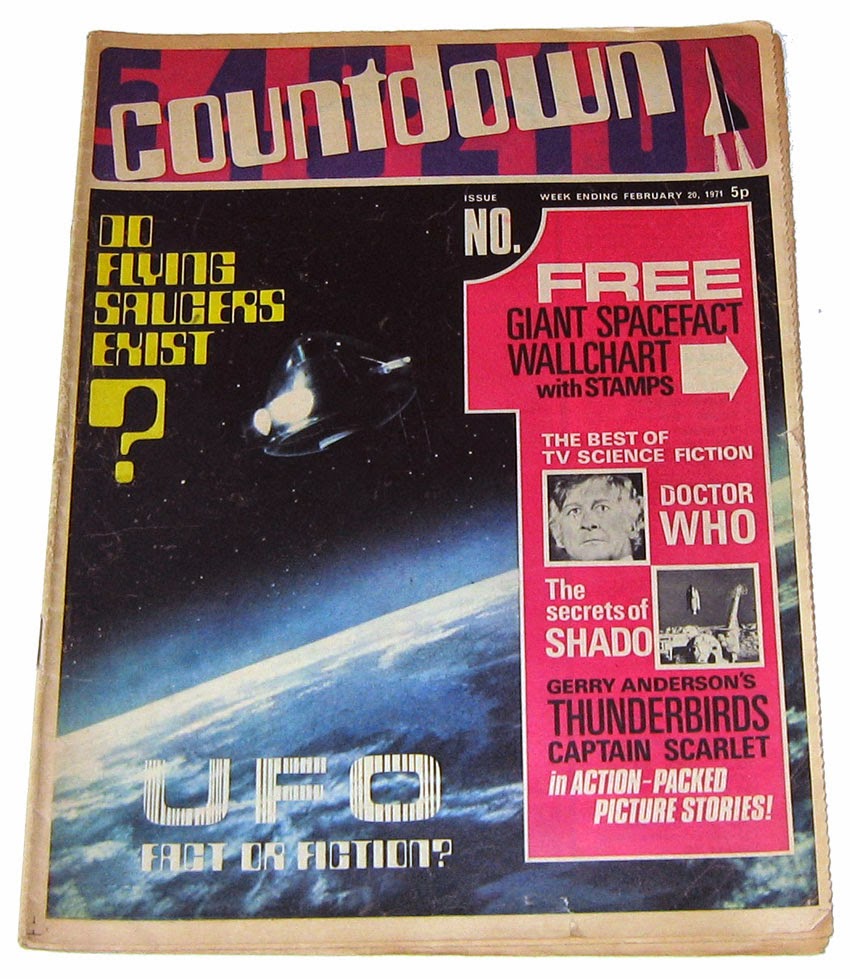 A brand new Thunderbirds strip began in Countdown No.1, illustrated by Don Harley... 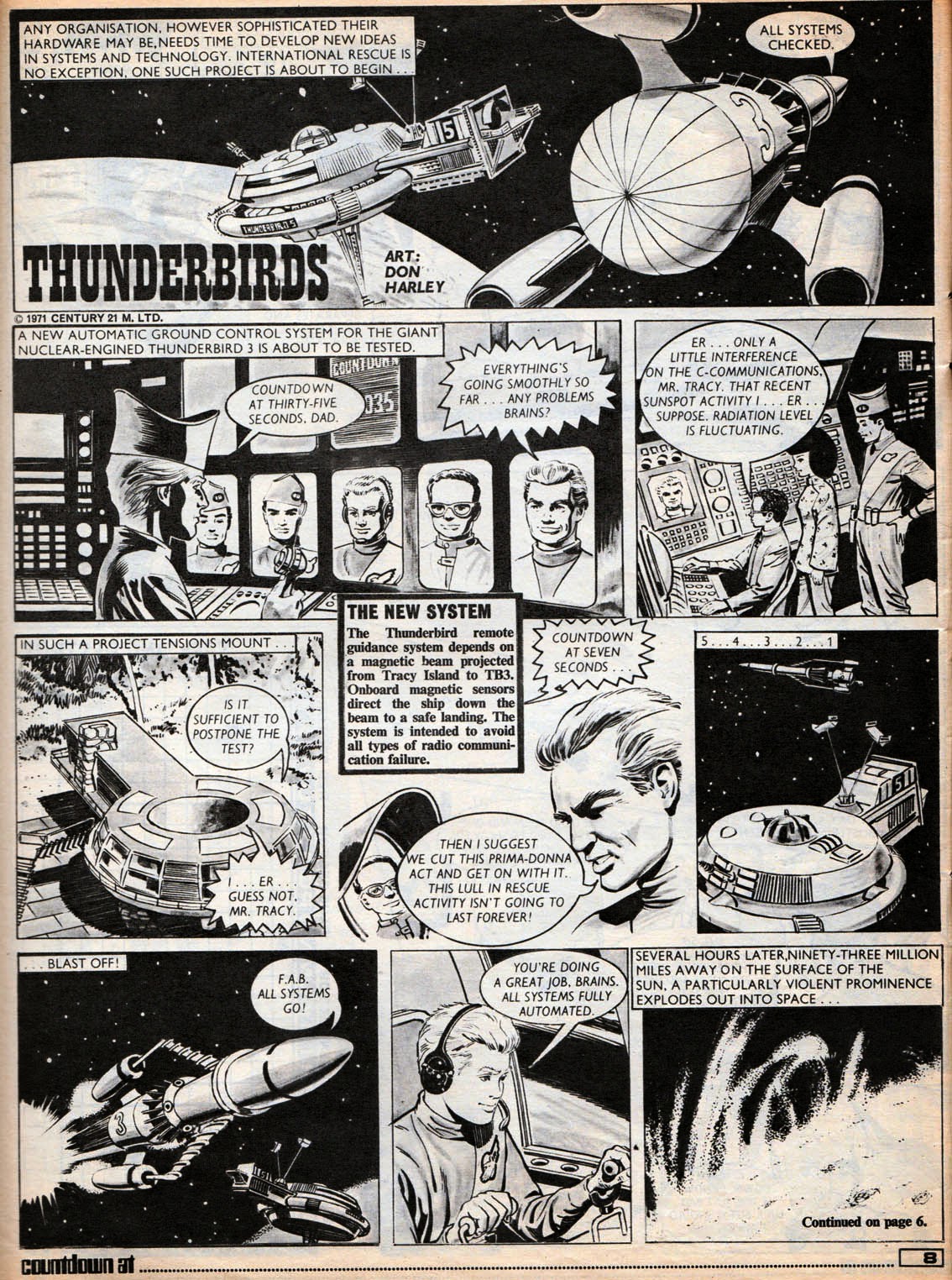 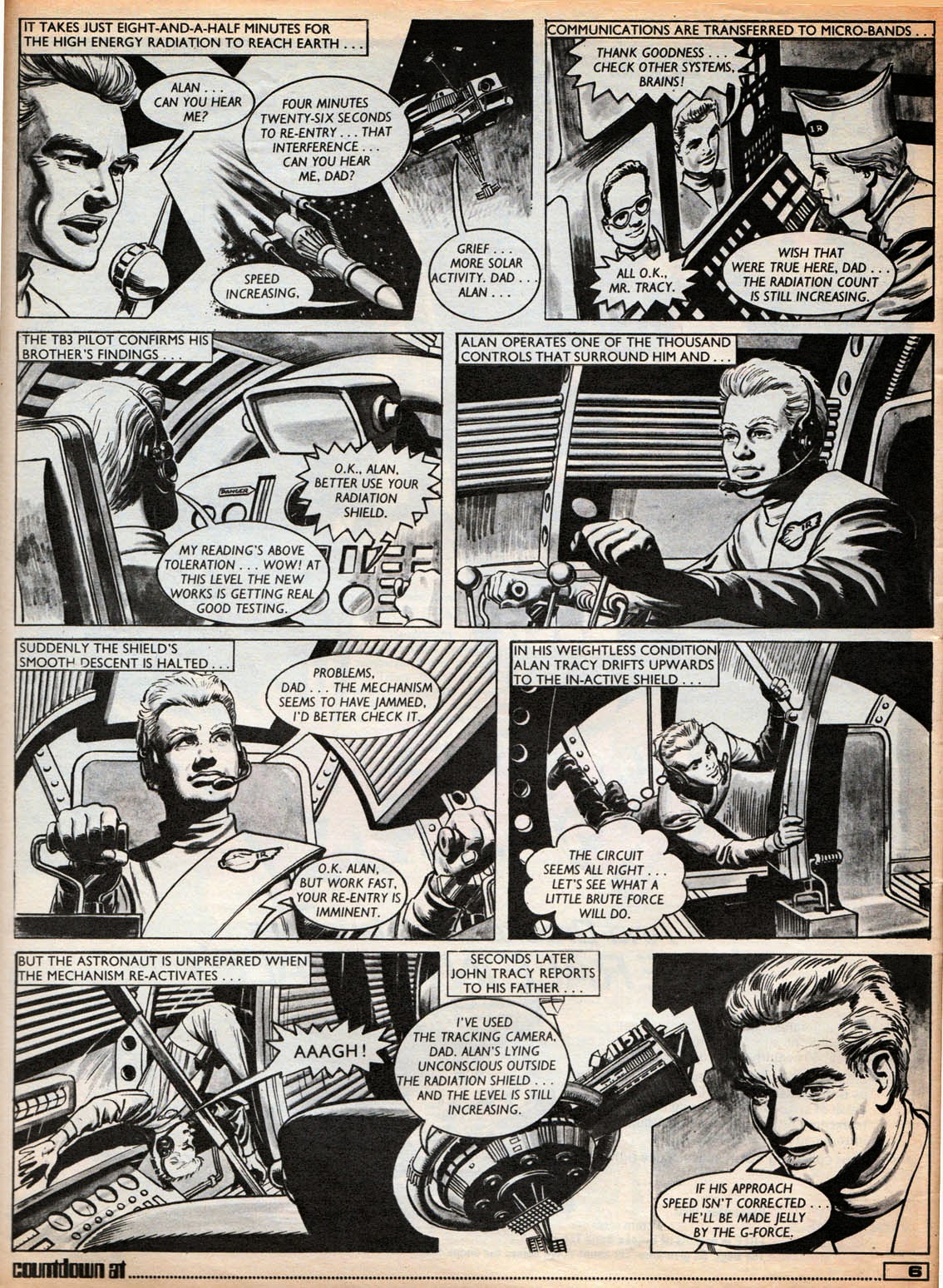 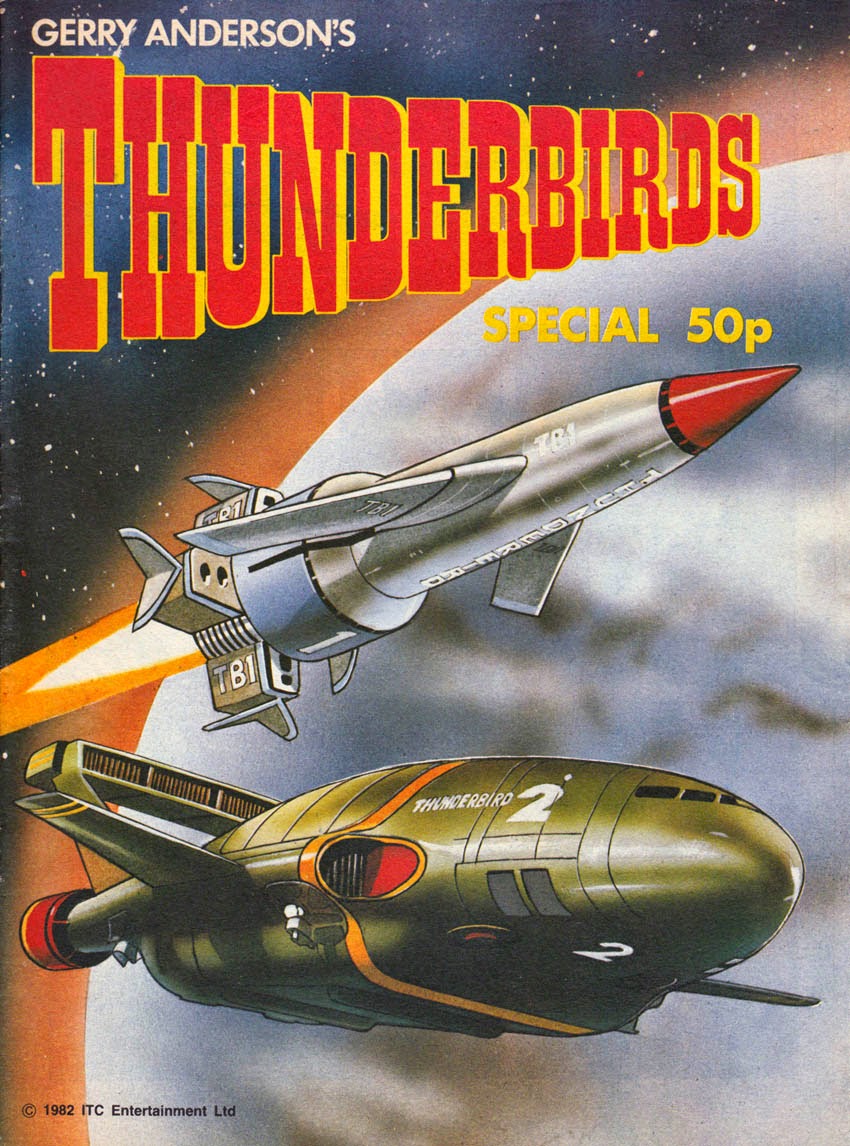 Presumably it sold well enough for Polystyle to publish two more Thunderbirds Specials in 1983 and 1984. Again, all reprint. 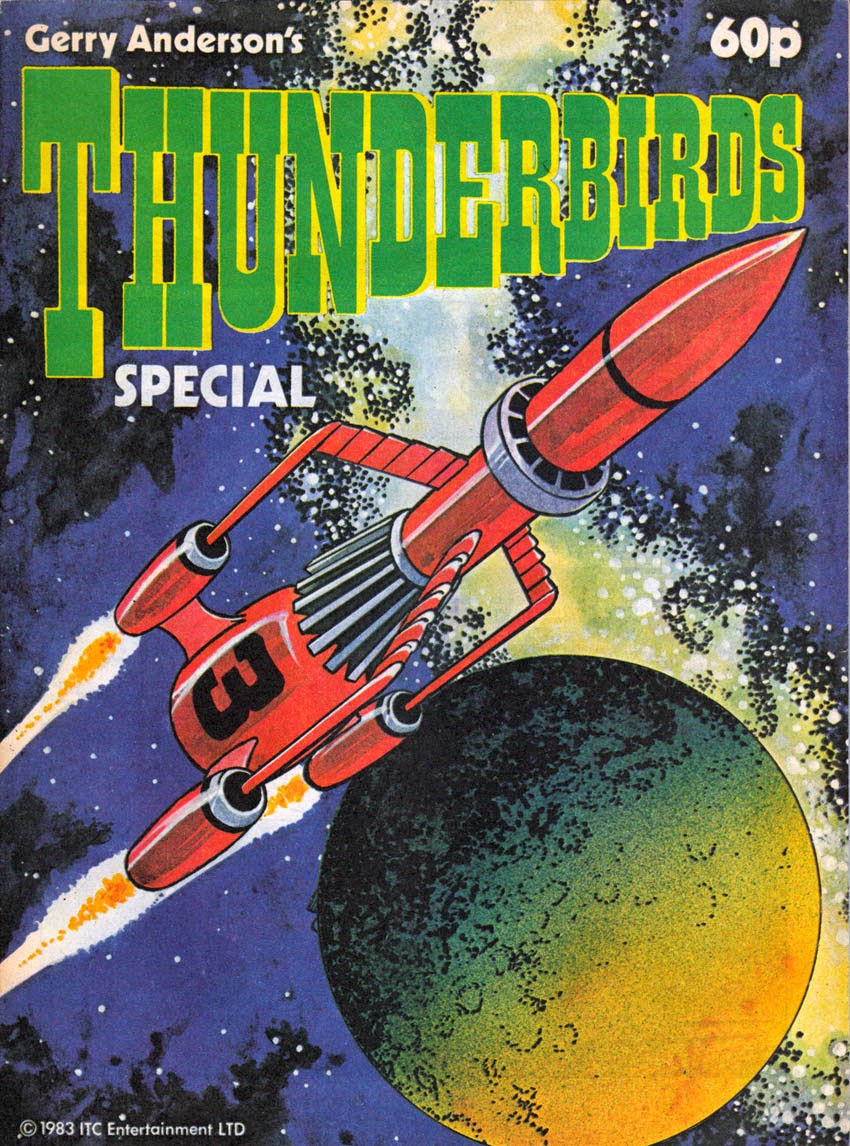 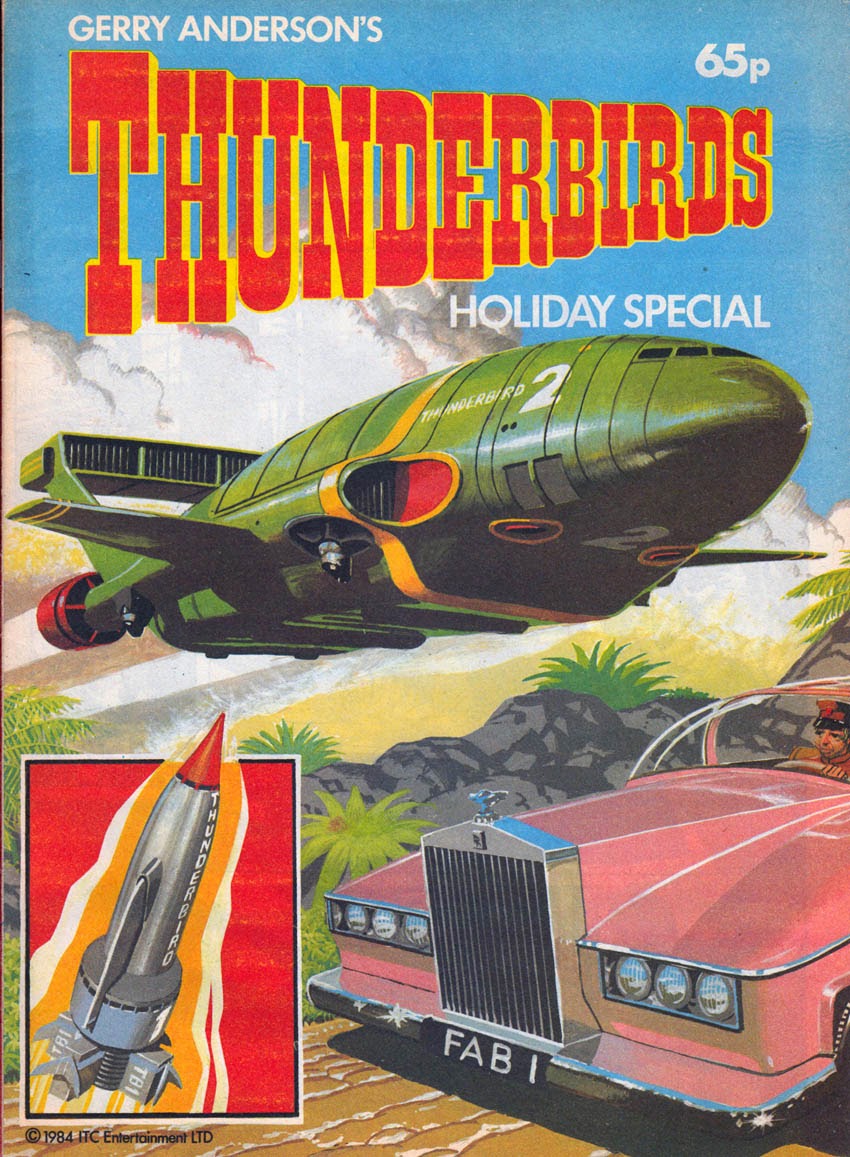 A few years later, in 1988, Action 21 was launched, published by David Nightingale of Engale Marketing in Blackpool (based at Lytham Road's excellent Thunderbooks comic shop). Superbly designed by Graham Bleathman, Action 21 was a 20 page A4 comic on quality paper, containing sharply reproduced reprints of TV21 strips including Bellamy's Thunderbirds. Sadly the limited distribution comic didn't last too long but it was a worthy exercise. (Back issues are still available from the publisher. Click here to see.) 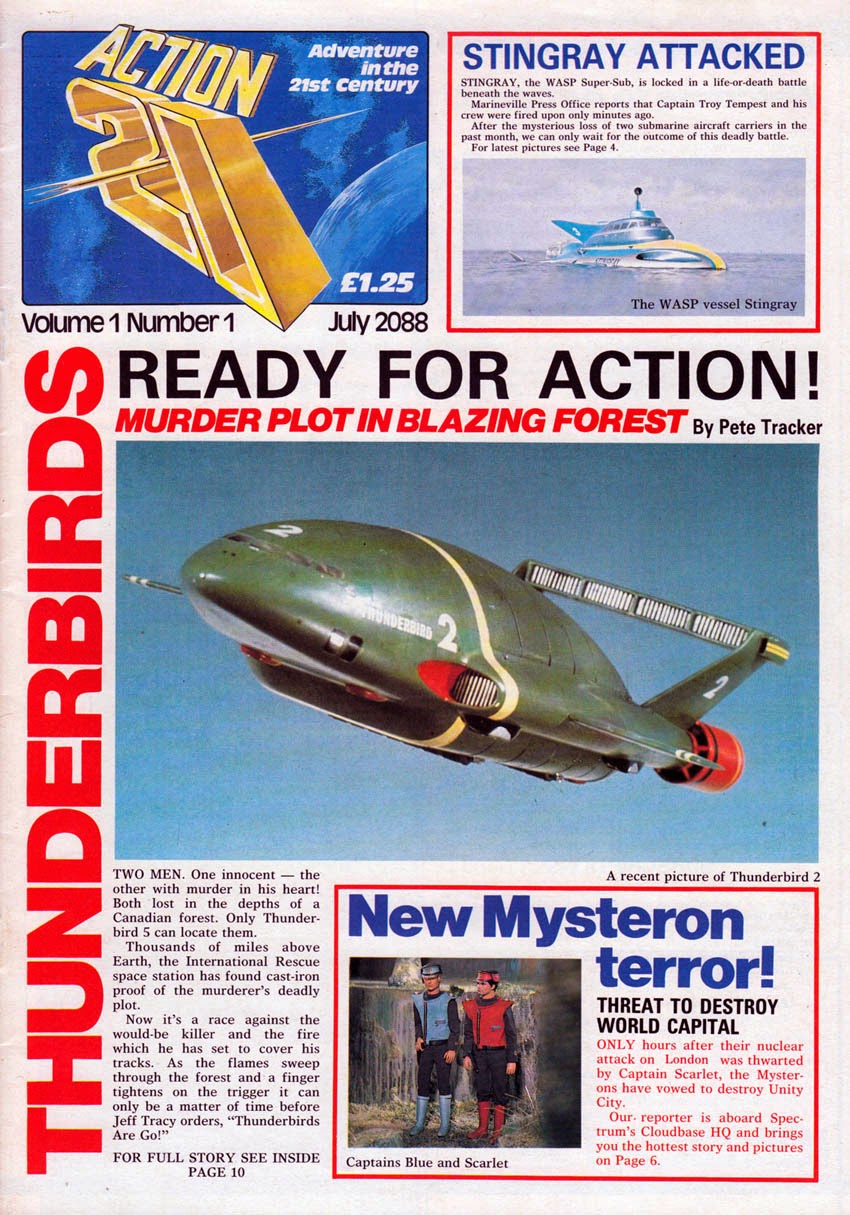 In 1991, with Thunderbirds enjoying a revived surge of popularity for a new generation (due to repeats on TV), Fleetway launched Thunderbirds the Comic, a 24 page fortnightly edited by Alan Fennell who had been the original editor of TV21, as well as a writer on the TV series. 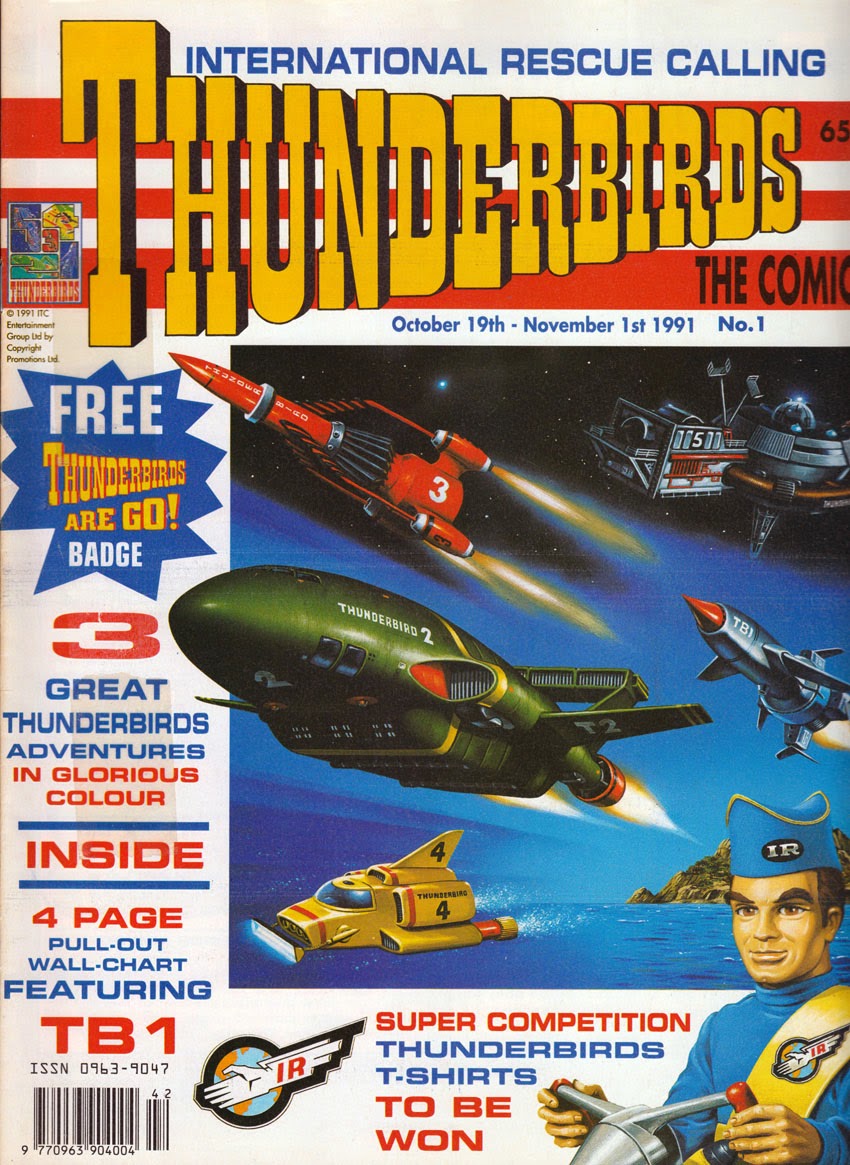 For its first three issues Thunderbirds the Comic only contained reprints of TV21 strips (plus great new cutaways by Graham Bleathman) but from issue 4 it began to include new material in the form of strip adaptations of TV episodes featuring fantastic artwork by people such as Steve Kyte and Keith Watson... 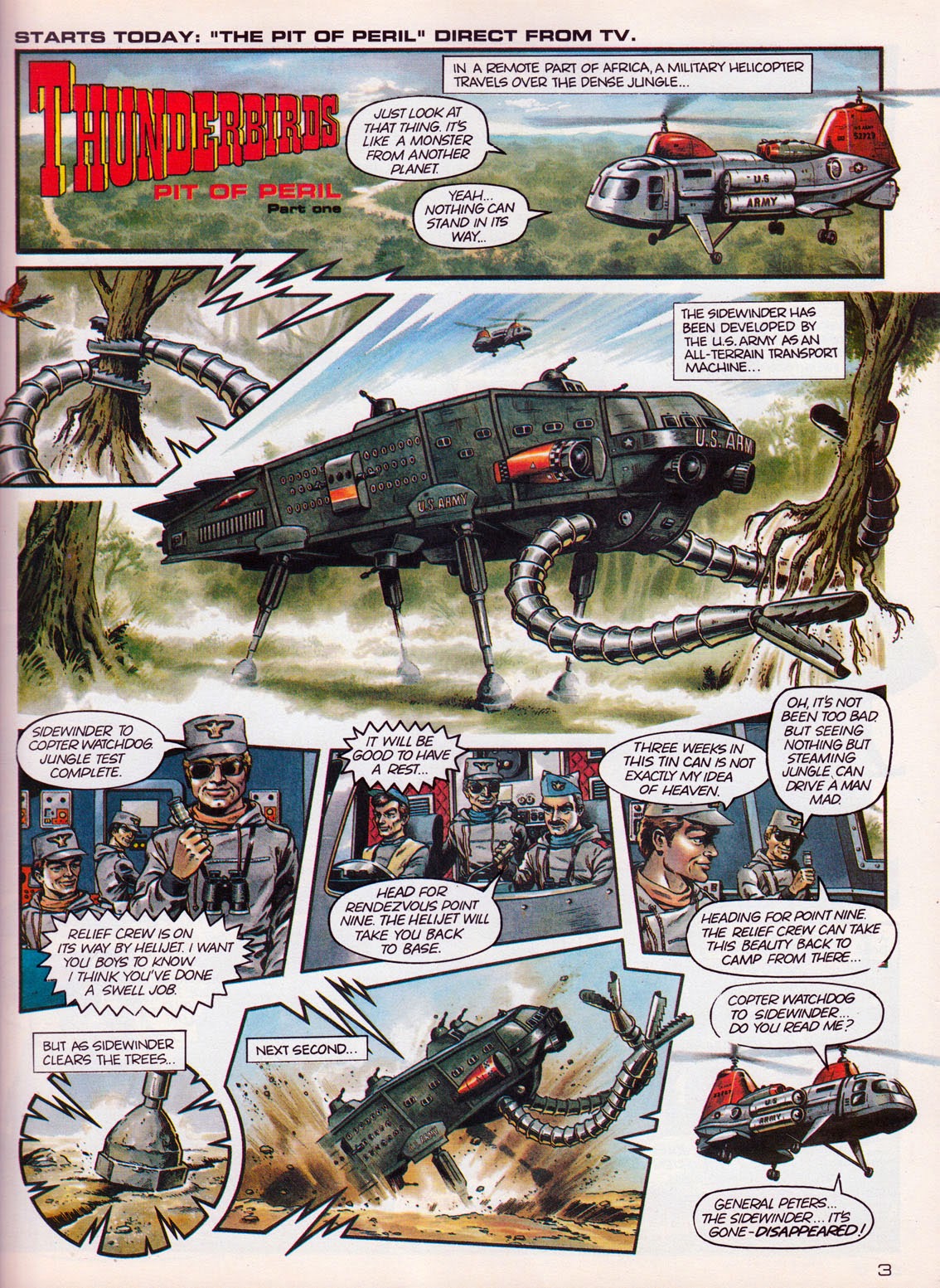 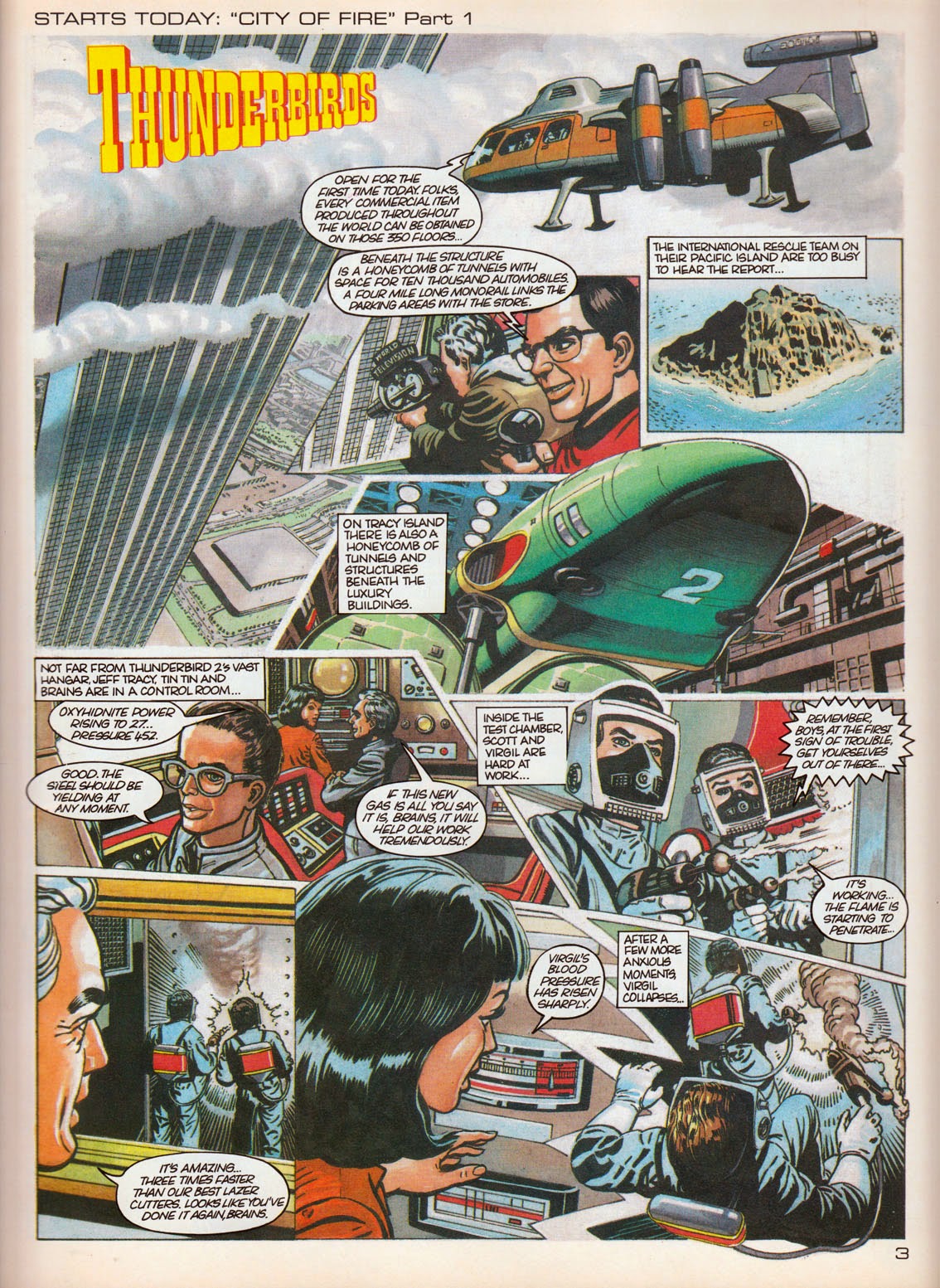 Thunderbirds the Comic was initially a massive success for Fleetway and ran for 89 issues, concluding in March 1995. Convinced there was still potential in the comic, Alan Fennell gained the licence to publish it himself as Thunderbirds Are Go! 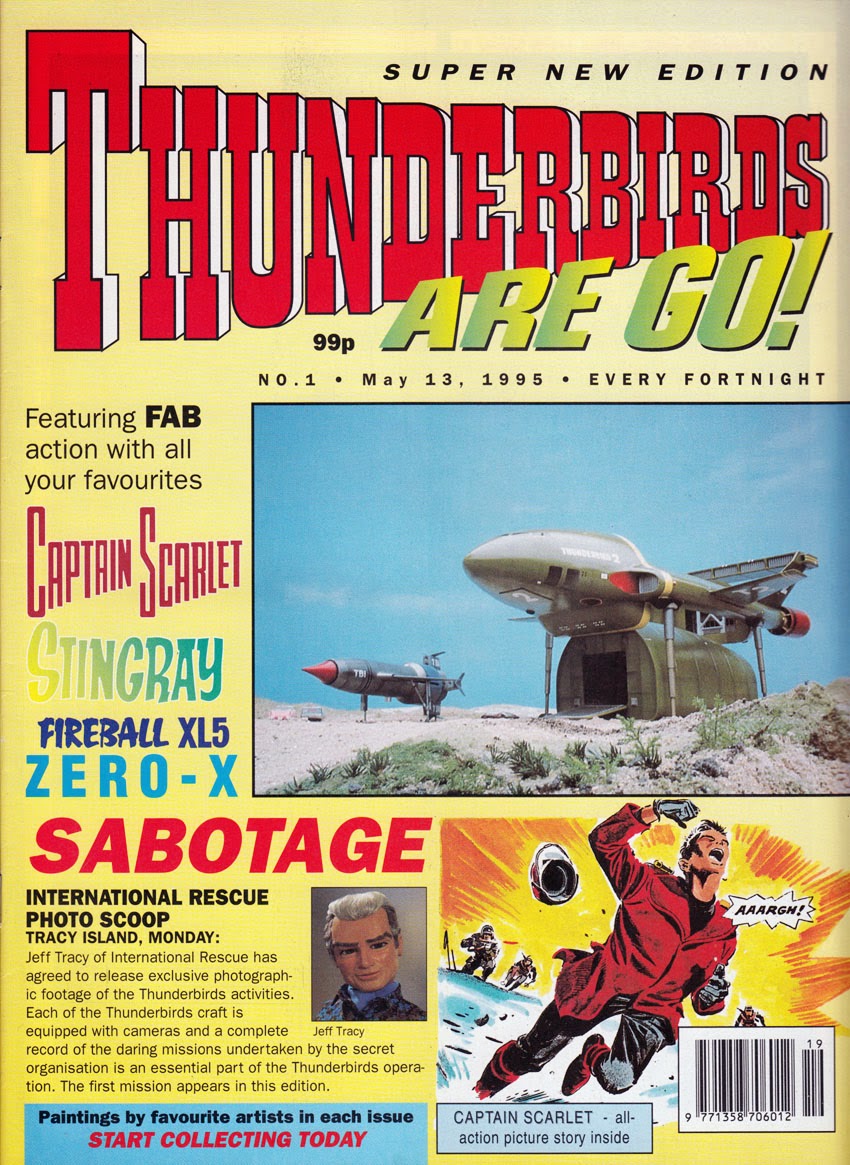 For a few issues it was cheaper than its predecessor but Thunderbirds Are Go! didn't survive for long. (I think it lasted 8 issues.) Its contents were once again TV21 reprints plus photo-strips using screen grabs from the TV series. (Unfortunately the quality of the photos wasn't too good in issue one, with some looking like they'd simply been photographed from the TV screen.) 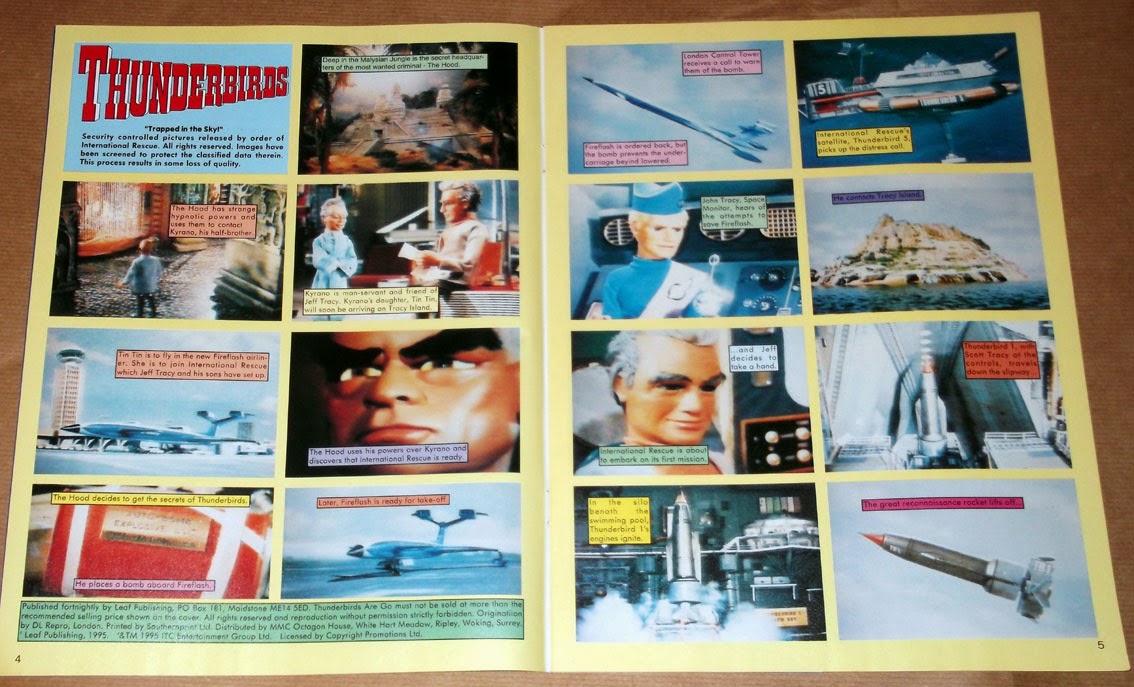 In 1999 Redan launched their own Thunderbirds monthly magazine, with a slick design in tune with other Thunderbirds merchandise of the time. 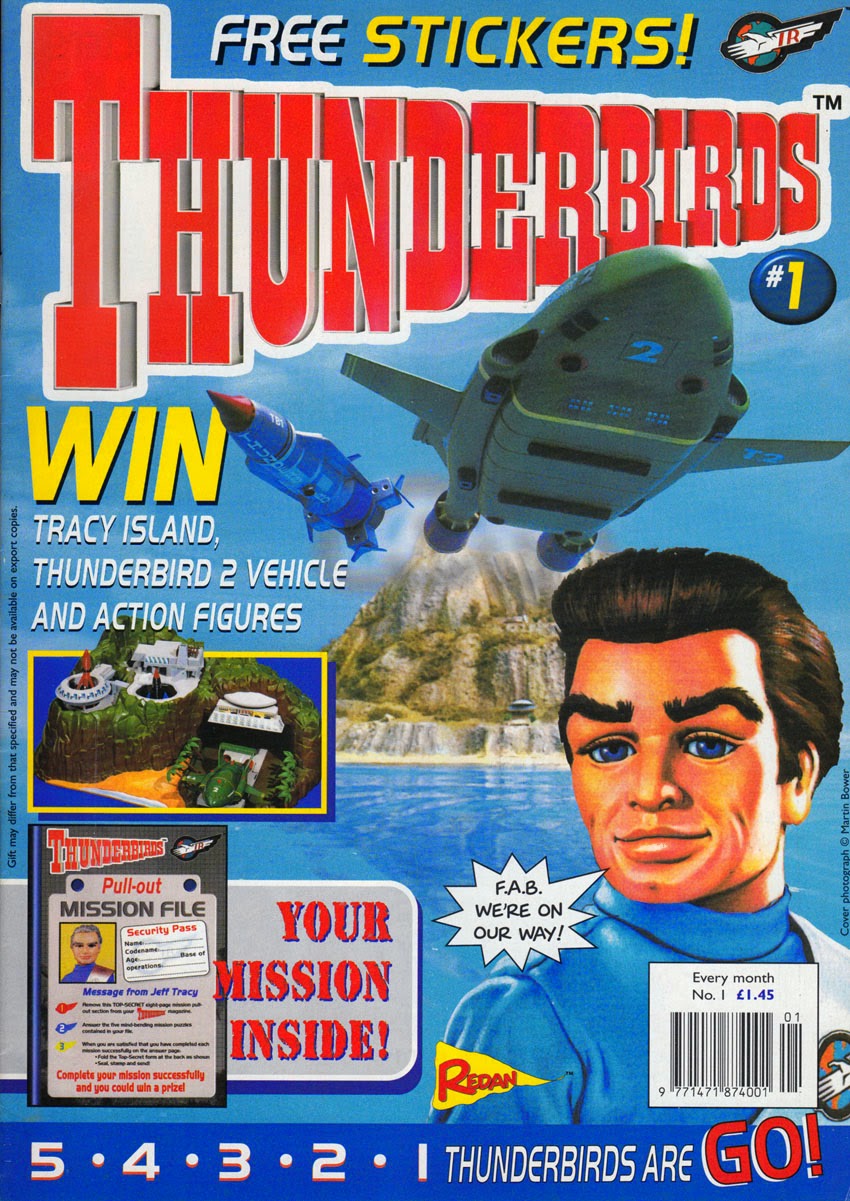 The direction of Redan's Thunderbirds mag was distinctly younger than previous publications featuring the property. Its emphasis was on simply told photo-stories and activity pages (and new cutaways by Graham Bleathman)... 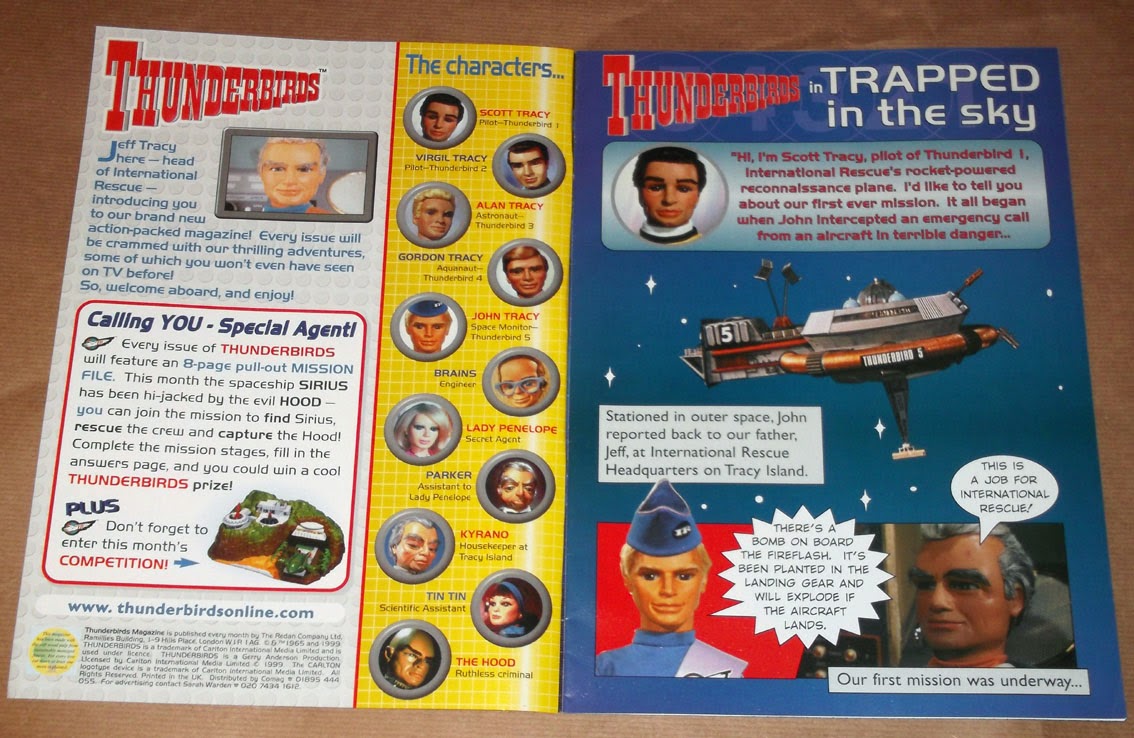 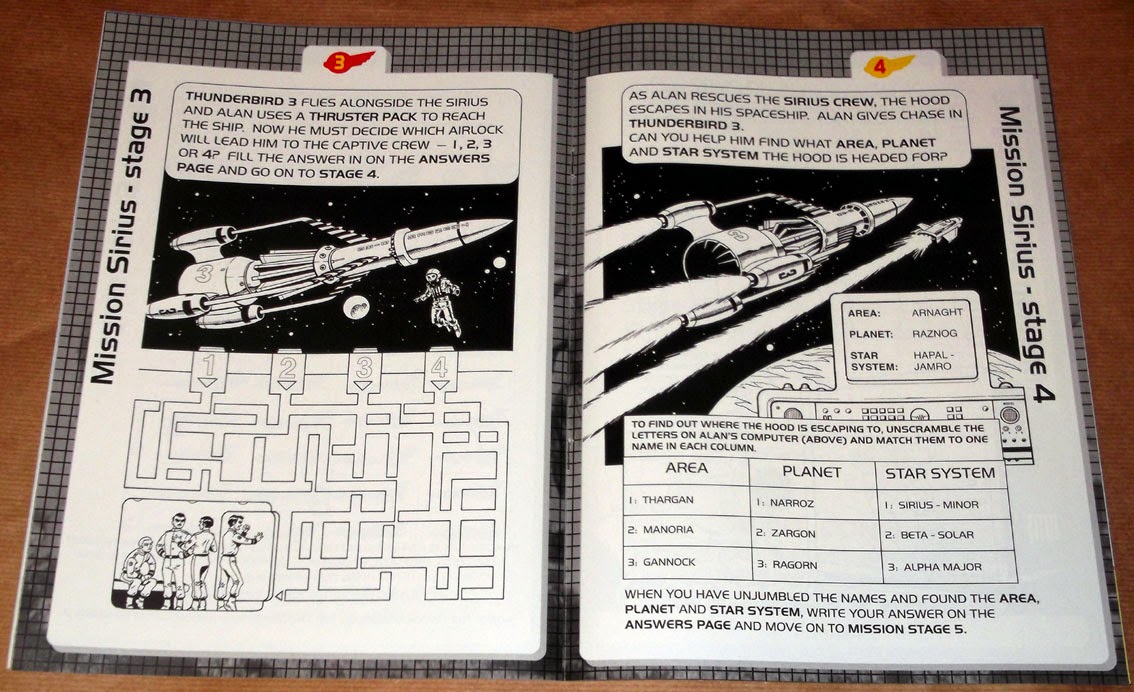 Undoubtedly this was a disappointment for older fans but it proved to be the right decision by Redan as the publication ran for several years.

So... what will DC Thomson's new Thunderbirds Are Go magazine be like when it arrives on our shelves? The last 49 years of Thunderbirds comics (and indeed British comics in general) have shown a gradual simplification in tone. TV21 was very sophisticated compared to today's comics, but that didn't deter readers back in 1965. (I was five years old when TV21 No.1 was published. Loved it!)

The old attitude in publishing used to be that if your comic was aimed at 5 to 11 year olds, you'd write it for the older end of the target audience and the younger ones would catch up (and feel 'big' that they were reading something that wasn't 'babyish') - because children will drop a comic like a stone if they think it's infantile. Publishers could take risks like that when sales were half a million or so. Today it's a different scene, with many children struggling with their reading, a culture with more emphasis on visuals, and publishers not wanting to risk alienating the ones who do pick up their mags. It's possible that Thunderbirds Are Go will follow the direction of Doctor Who Adventures and suchlike and have a focus on 'activity pages' and pull-out posters - and inevitably be bagged with gifts. We'll know soon enough. The good thing is that once again there'll be a Thunderbirds magazine in newsagents (hopefully with some comic strip).

UPDATE: I've just received this first image of the new character designs for the new series. What do you think, folks? 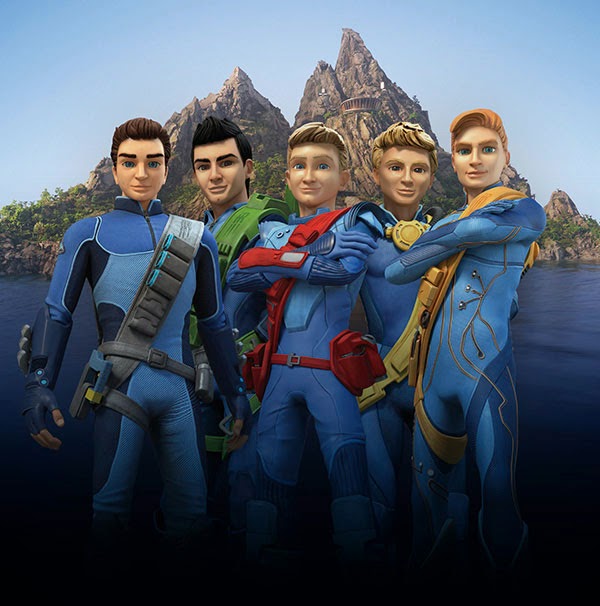 I loved the Frank Bellamy artwork on these strips from Tv21st century back in the early 1960's and was lucky enough to come across three soft- bound, square backed collections in a charity shop. What a wee bargain that was .I think i got the lot for £1.50.They deserve a really big format though.It is such fine work .

Were they the Century 21 books that were published a few years ago? Yes, good value for £1.50! They retailed at about £15 each I think.

EXCELLENT Post, Lew! There were one or two things that I didn't know about. Let's hope both the CGI series and the comic are successes. They have done this before with Captain Scarlet, with some success, so fingers crossed.

I really liked the CGI Captain Scarlet series (and the original of course). The design on the new Thunderbirds looks lighter than that though.

I hear there are several changes to the original show. Tintin has been renamed for one thing (to avoid confusion with the Hergé character). Other changes are more drastic, but essentially the basics sound the same.

The Thunderbirds Comic Collection which Egmont published in Oct 2013 can now be found for £4 in branches of The Works. (It was down to £2 in their winter sale.) A considerable saving on the original £25 cover price !

I like the look of the characters in the forthcoming series. Scott and Virgil are still recognisable but the rest of the family have been given a One Direction style makeover likely to make them more appealing to today's kids.

I thought it was great that they were so successful again due to simply repeats on BBC Two back in the early 90s. I was definitely sucked in, it coming on right after repeats of Randall & Hopkirk (Deceased) it became a weekly tradition and my parents and I would sit down and be gripped by Thunderbirds every single week. I was about 15 at the time. I collected the comic too and absolutely adored it! Let's hope the new one is more along those lines. I remember having those superb cutouts of the show's technology all over my bedroom!

I hope this will be enough of an all-age reboot that I can enjoy it with the kids. Having just discovered that the Dr.Who telly show is quiet good and I can watch it with the kids, it would be nice to add another. Like the Doctor, I have little knowledge of Thunderbirds, beyond the few comics I have read. so the new series will come with little baggage for me. I know I have the Fleetway Thunderbirds somewhere, I must dig them out as read them, I got the as part of a job lot years ago and never read them. The DCT comic(?) sounds interesting, even if its just an expensive colouring book, its good to see them keep an interest in the juvenile market. Good post Lew, as usual!

The new mag is said to be aimed at 5 to 11 year olds. That's quite a broad range. A child changes a lot between those years, so hopefully it'll have more to it than the average children's magazines which are aimed at the very young.