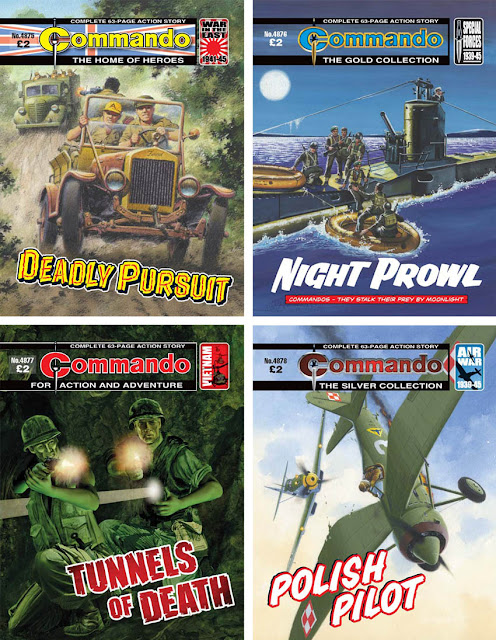 On sale from New Year's Eve (or possibly earlier) are the latest batch of Commando titles from D.C. Thomson. What does Britain's longest running adventure comic have in store this week? Here's the PR direct from Commando HQ....

Commando No 4875 – Deadly Pursuit
Cut off from their unit, Second-Lieutenant Bob Holbeck and Private Vic Jolly were trying to get out of battle-ravaged Malaya for the relative safety of Sumatra.
Hooking up with a rag-tag group of survivors, they commandeered a Model T Ford pick-up truck and fled.
In a retreat already fraught with danger, they would also have to escape from the clutches of the Kempeitai — the feared Japanese secret police, and they were hot on their tail.
Story: Alan Hebden
Art: Morahin
Cover: Ian Kennedy

Commando No 4876 – Night Prowl
Jim Fraser was a born Commando. Tough, dependable, daring. But there came a day when they stripped him of his Commando shoulder flashes and his beloved green beret. They took away his tommy gun and gave him a shovel.
Almost before he knew it he was transferred to the pick and shovel brigade, the Pioneer Corps. Rough treatment for a fellow who had made just one mistake.
You can’t win battles leaning on a shovel, but Jim soon had those pioneers chucking away their shovels and desperate to get at Nazi throats.

Introduction
Ken Barr’s fantastically moody cover really sets the scene for this gritty tale of a Commando who is thrown out of his unit and forced to join the Pioneers because of one unfortunate mistake.
Our hero, Jim Fraser, has undoubtedly been wronged, and the story of how he strives to overcome injustice and hostility is well-written and, in turn, well-illustrated, with dynamic line work by Bielsa.
Scott Montgomery, Deputy Editor
Night Prowl, originally Commando No 188 (November 1965)
Story: Magee
Art: Bielsa
Cover: Ken Barr

Commando No 4877 – Tunnels Of Death
When he was drafted to serve in the Vietnam war, young Joe Wright was nicknamed “Stumpy” because of his small stature. However, his lack of height unexpectedly became an asset.
Recruited to join the ranks of Rat 6 – the elite “Tunnel Rats” who fought the Vietcong enemy in a labyrinth of claustrophobic caverns, Joe soon discovered that lethal danger lurked beneath the surface as well as above it.
Story: Richard Davis
Art: Olivera
Cover: Janek Matysiak

Commando No 4878 – Polish Pilot
Rounding off this year’s complement of Silver Collection issues is this curio from November 1990. Obviously, the clue is in the title as to what this story is all about. Our eponymous hero, Lieutenant Karl Latek, is an endearing, if slightly eccentric figure — but he is a man who will never give up. His determination to keep fighting the enemy, no matter the cost to his own personal safety, makes his apparent recklessness all the more interesting.
Scott Montgomery, Deputy Editor
Polish Pilot, originally Commando No 2383 (November 1990)
Story: Allan Chalmers
Art: Terry Patrick
Cover: Ian Kennedy
Posted by Lew Stringer at 16:31