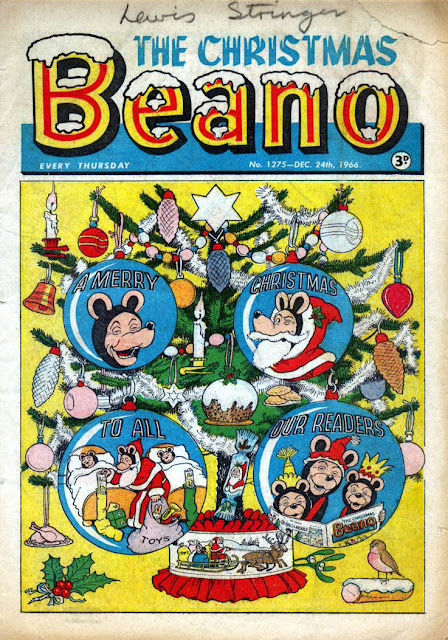 It's now December so during this month I'll be taking a look back at some vintage Christmas comics. Not every day of course, and I'll be posting about non-festive comics too at times (as I still have several new titles to review), but expect to see a few snow-capped comics over the next few weeks.

Let's start with the Christmas issue of The Beano from 1966. A fantastic cover by Dudley Watkins featuring Biffo the Bear. (And yes, my name is written at the top because this is the very issue I had reserved at the newsagents 49 years ago.)

The first strip inside is Punch and Jimmy, the story of two warring brothers, with artwork by Dave Jenner, who was the co-creator of Sammy Shrink for Wham! 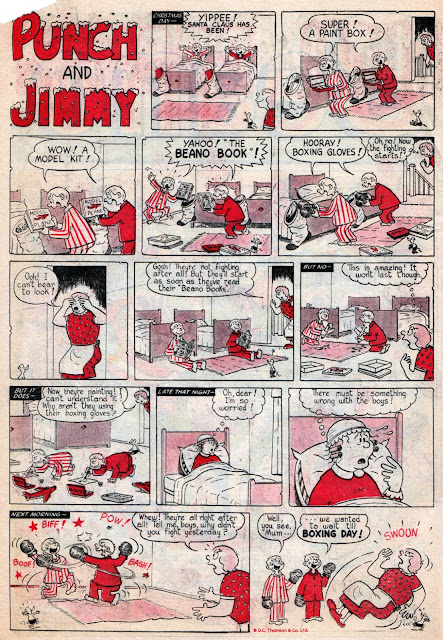 Even the adventure strips had a festive theme, with The Iron Fish story containing a snowman, sledges, and a Christmas party. I'm not sure that Danny and Penny's methods of scaring the life out of children in order to guide them to the party are that justified but the artwork by Sandy Calder is nice. 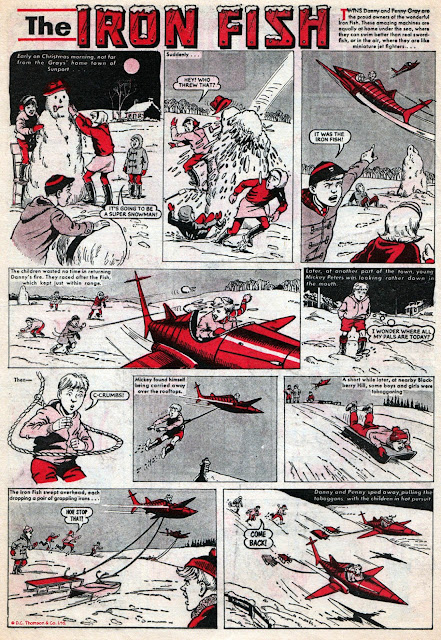 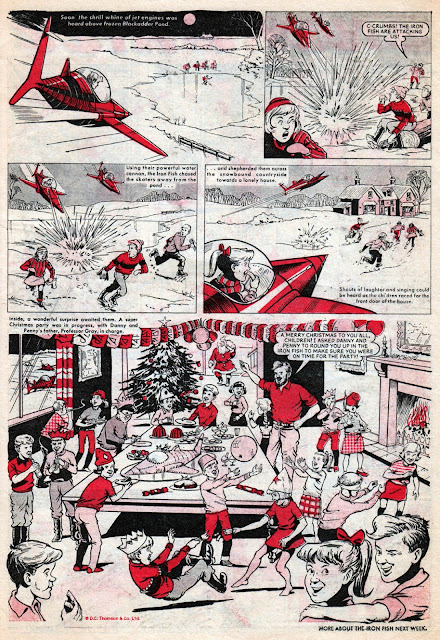 Lord Snooty and His Pals forget that it's Christmas Eve in this strip drawn by Dudley Watkins. Would any child forget that? No matter. It's a great little tale anyway. 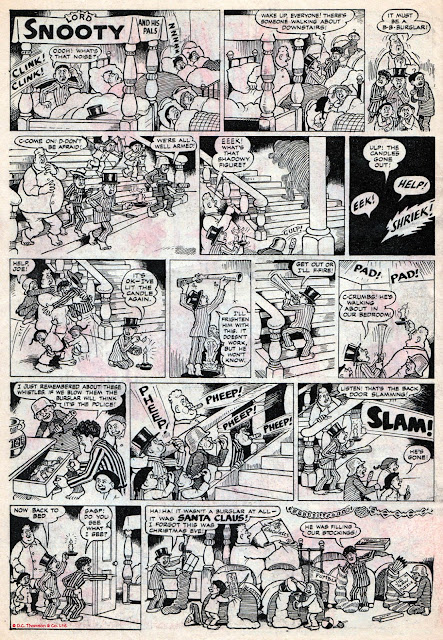 On the back page of this 16 page issue, Dennis the Menace ends up whacked and in shock, even though it's Christmas Day. To be fair though, I never analysed it that deeply when I was a kid. It's all good comic fun. Art by Davey Law.

Another Christmas comic later this week!
Posted by Lew Stringer at 00:01

Speaking of The Beano, it was mentioned in The Sun. Of course Mark Hamill is a famous Dennis Fan Club member, so him being a Beano fan isn't news, but it's still nice to see this pic of him reading a 1979 issue.
http://www.thesun.co.uk/sol/homepage/showbiz/6773417/Star-Wars-actor-Mark-Hamill-loves-The-Beano.html

Got this issue..its a gem!

Thanks for the link, James.

Peter, it sure is!

As I have said previously on your blog Lew, I was a huge Billy The Cat fan as a child, & I always loved the stories (usually around Christmas time) when Billy and Katie would wear their winter camouflage (white) catsuits... cos obviously, a twelve year old on a rooftop in a white catsuit is much less easy to see :-)

That brought back some nice memoies I had that comic back in 1966 and it stuck with me as I vividly remember the Lord Snooty and Iron Fish stories - great stuff Lew thanks for showing this (49 years ago arrghhh!)

I wish DC Thomson would use the Comixology app to showcase some of their back catalogue (or some of the modern stuff come to that !)

Commando is pretty much the only one of their titles on there at the moment.

Yes, it would be good to see stuff like that. They used to run selected vintage strips on The Beano website but I'm not sure they do that now.