Although Star Trek had debuted on TV in the USA in 1966 it wasn't until this day in 1969 that it was broadcast in the UK. The BBC kicked off with the episode Where No Man Has Gone Before at 5.15pm on Saturday 12th July 1969, and millions of us were immediately enraptured.

However, many of us had already been following the adventures of the U.S.S. Enterprise since January 1969, when it appeared as a comic strip in the first issue of Joe 90 Top Secret, a 20 page glossy tabloid-sized anthology weekly that also featured Land of the Giants, The Champions, and of course Joe 90 himself. Although beautifully illustrated by Harry Lindfield, the scripts suffered from either insufficient information supplied by Paramount or a bad transatlantic phone connection... with Captain Kirk referred to as Captain Kurt for the first few weeks! 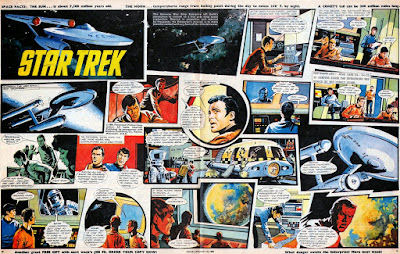 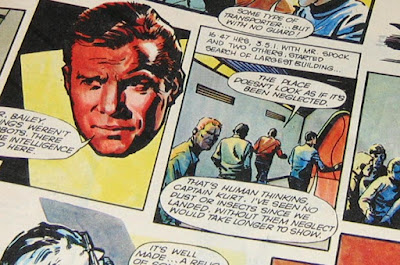 Nevertheless, the Star Trek strip was exciting and fast paced, and in full colour! A big deal back when the majority of UK viewers still had black and white televisions. Even so, the strip made colour mistakes with the uniforms, sometimes giving Kirk a red tunic. It's a wonder he survived!

City Magazines, the publishers of Joe 90 Top Secret,  were on the ball when Star Trek arrived on British TV. That same week they featured Star Trek on the cover, and also on the covers of the following three issues. 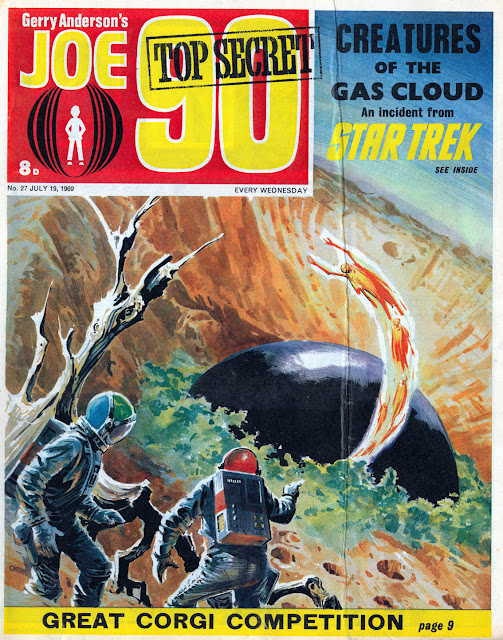 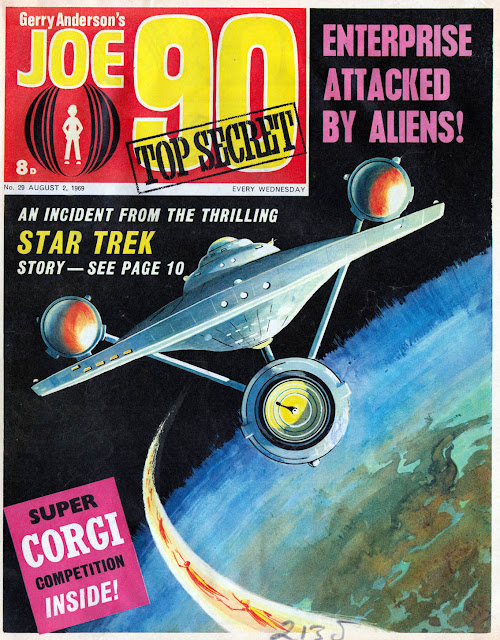 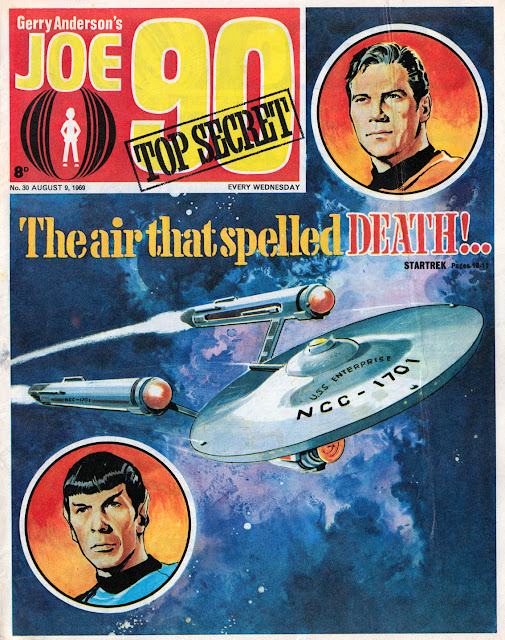 Sadly the fate of the comic was already sealed and it was set to merge with TV21 a few weeks later. However, the popularity of Star Trek ensured it a place in the new TV21 and Joe 90 comic, where it later became the regular cover strip.

In 1971, TV21 merged into Valiant, but the Star Trek strip survived, drawn by John Stokes, becoming the regular centre-page attraction (apart from the second episode which appeared on Valiant's cover). 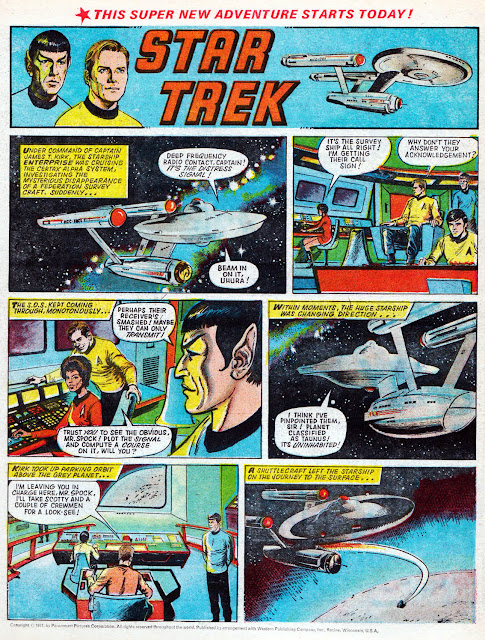 Star Trek's British strip finally ended in the Christmas 1973 issue of Valiant. Its run in comics had actually lasted as a five-year mission, although that was more likely due to the length of the license the publishers had been contracted to rather than any deliberate homage to the Enterprise's tour of duty. 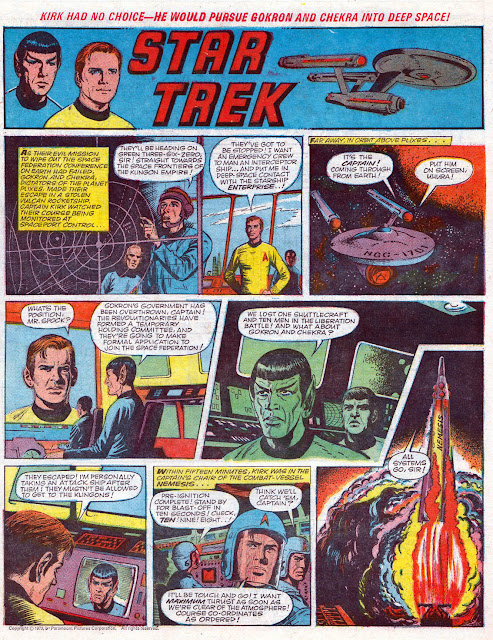 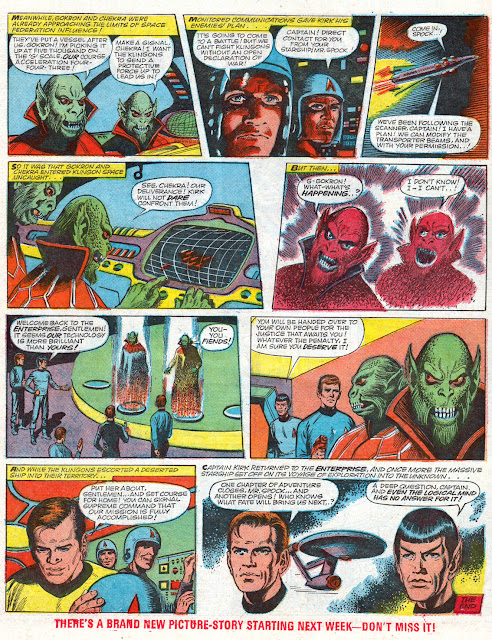 Personally, I've never been into Star Trek fandom, and wouldn't consider myself a Trekkie (or Trekker, or whatever the favoured term is) but I did really enjoy the original series. I watched some of the newer Star Trek series too, which were ok, but I'm not fussed to ever watch them again. I do like Star Trek: Discovery, but, again, not enough to watch the episodes more than once. The original series remains my favourite; a colourful Western in space with a great cast, likeable characters, and solid writing.

Incidentally, several Star Trek actors including William Shatner and Walter Koenig will be amongst the guests at the London Film and Comic Con at the end of this month! So will I, come to mention it. Check it out:
https://www.londonfilmandcomiccon.com

Do you have any thoughts about Star Trek, either the TV shows, the strips, or the merchandise? If so, share your comments below...

All images scanned from my collection.

Alas we couldn't afford Kelloggs and had to make do with own brand cereals, but I do remember there being cut out Star Trek masks on the back of one of the Kelloggs cereals.

One day our teacher brought in some boxes for us to use in our craft lessons and one of them had a Mr Spock mask on the back.

I saw it first and our teacher let me take it home rather than cut it up. I must have worn that for a couple of months before it completely split!

Thanks again for the nostalgia (I never bought any of these kinds of comics during my childhood in Bedford, though my uncle--a few years younger than me and my brother-- subscribed to TV-21. He lived 2 doors down the street, with his parents, when we were kids.) I remember Joe 90 the TV show. I think I vaguely remember the Capt. Kurt snafu, but this was before I got into watching Star Trek.

I remember the Mr.Spock cut-out mask, Steve! Sugar Smacks had some great incentives to buy. Sadly, food manufacturers are no longer allowed to entice kids with such things in order to eat sugary foods... and Sugar Smacks are long gone. I bought some Sainsbury's puffed wheat cereal last week and it's tasteless! Had to drizzle honey over it to make it palatable.

I do have the IDW UK Comic Classic Collection containing all the Star Trek strips from Joe 90 to Valiant.

A great read and imaginative too.

The fact that they got Kirk's name and uniform wrong at the beginning and Spock often acting out of character made no difference. :)

IDW collected these strips into a series of hard-backed books some of which are currently available in The Works discount bookstores at the princely sum of £4.00 each. I was severely tempted to buy a copy but sadly they've been shrunk down from their original tabloid size to to US comicbook dimensions - how could they do that to all this gorgeous artwork?

Still, it is a chance to pick up a stash of Mike Noble artwork for a very low price. I might still be tempted....

It's a shame those books used a smaller size as IDW have done some books in a much larger format. I guess it's because the majority of the Star Trek strips were in a small size so they decided to make the books uniform in format.

I haven't seen them in my local Works, but it's not a very good branch, tending to prioritise toys and kids' games over books.

Sugar Smacks were fond of Star Trek promotions; the greatest of them all featured Action Transfers for rubbing down onto the packet backs. Still looking for a couple of the six transfer sheets… you can see this promotion at action-transfers.com.

I don't remember the Star Trek transfers but I did have some of the badges. Still have them, somewhere. Sugar Smacks had some nice free gifts over the years.

Seeing the fact that they got Kirk's name wrong reminds me that last week's Radio Times had a facsimile supplement of pages from 50 years ago for the Apollo 11 mission which included an announcement of the imminent beginning on BBC1 of Star Trek, starring William Shatner and Leonard Ninoy (sic) - and it was priced 8d. In fifty years' time, at the same rate of increase (it's now £3) RT will cost £90!

IPC issued one (or more) STAR TREK specials in the 1970s, with US reprints.

TV COMIC picked up the US reprints in the mid-to-late 1970s. Those oft-off-message Gold Key strips were also the mainstay of the British annuals throughout the decade.

Marvel UK grabbed the license in 1980, allowing them to reprint the US Marvel strips (post Motion Picture) in their short-lived 2000AD wannabe weekly FUTURE TENSE (although not - curiously - the first few issues which favored another outing of Marvel's own Trekalike Seeker 3000, already recently seen in the back pages of STAR WARS WEEKLY). They also spun-off an annual (with the Motion Picture adaptation) and two holiday specials in 1981 and 1982.

Thanks SR. I have the first Star Trek Annual somewhere but thought I'd just focus on the UK strip here. I bought the Gold Key Star Trek comic for a while in the early 70s and enjoyed it.

Hi Nutty, Yes, I bought that Radio Times last week. I had the original issue 50 years ago. We didn't usually have the Radio Times but that Apollo issue attracted me at the time. We were all "space mad" in the sixties. Such a great, optimistic time.

Your pages from Harry Lindfield are gorgeous, and the likenesses of the actors - and Enterprise - are excellent. The later contributors though... well, I've paid full price for worse. And the standard of the printing was less anyway.

Some artists prefer to go for an impression of the likenesses rather than a photo-realistic look. I think we can all agree though that Mike Noble and John Stokes are both superb artists.