Celebrate BEANO No.4000 this Wednesday! 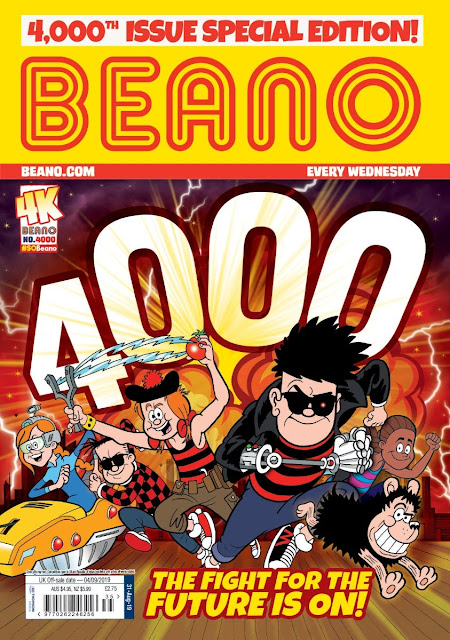 It's the longest running comic in British comics history and the Beano reaches it's 4000th issue this Wednesday! With a special red foil logo for the occasion, this edition contains a long story with the Beano stars encountering their future selves from the year 4000!

Meet characters such as Future Dennis... 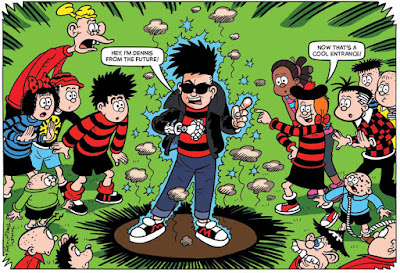 ...and stick around for issue 4001 the following week, when Pup Parade returns in a new series of mini-strips written and drawn by me!
https://www.beano.com/posts/inside-beano-no-4000

Wow, issue 4000! Long may it continue. It's still one of best looking comics on the news stand.

Haha! The Bruised Banana! Love it! Will have to pick this one up!

Yes, me too. Hopefully The Bruised Banana will be worth the price of entry alone - but I also like Maximum Minx, a nice play on the character's name.

Lew - trust you've recovered from the chest infection you mentioned recently. Good news about Pup Parade returning next week too - pity you couldn't add some Diamond Dogs to this future scenario :)

Yes, a lot better now thanks Tony.
I'd have loved to have a strip in issue 4000 but unfortunately Pup Parade doesn't start until the following week. My first work for the Beano in almost a year. Not sure how long it'll run for but I've drawn six so far and have three scripts ready to draw, which takes us into November, so hopefully it'll run to Christmas at least.

Have to say, I was very disappointed with this issue. I'd been waiting for it for (at least) a year-and-a-half, and thought they'd make a bigger deal of it than they did... maybe some extra pages, or the reappearance of some old characters. Instead, a re-hash of a story they've done before.

They tend not to get nostalgic in the weekly these days, preferring to do longer stories instead. Perhaps readers can't relate to "old" references. Personally I loved a bit of comics history when I was a kid but admittedly we're in the minority with that outlook.