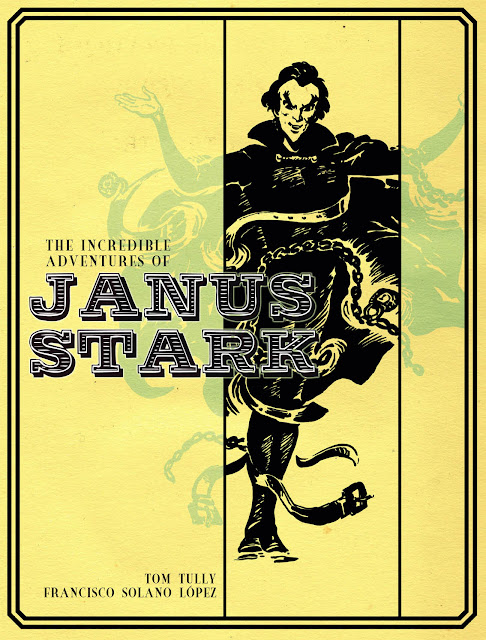 Great news for fans of the popular Smash! strip Janus Stark. Rebellion are releasing a 48 page comic reprinting some of his classic adventures later this month! Available exclusively via mail order. Written by Tom Tully, with art on most episodes by Francisco Solano Lopez... although Tom Kerr drew some early episodes too, as seen in these samples below.

Here's the PR direct from Rebellion with all the info...

“Behold, Janus Stark! Master of illusion, son of the unknown! No lock can fetter me … no rope or chain can bind my limbs!”

Prepare to be astounded and amazed as Rebellion Publishing brings a long-forgotten master of the uncanny, Janus Stark!
The Incredible Adventures of Janus Stark is a perfect-bound 48-page magazine showcasing one of the forgotten heroes of the heyday of British comics – a rubber-boned Victorian escapologist capable of incredible feats of agility and able to squeeze through the smallest gaps!

It will be available exclusively from the Treasury of British Comics webshop from 27th November, with online pre-orders from 4th November. Early preview copies will be available from the 2000 AD stand at the Thought Bubble convention in Harrogate this weekend (Tables 10-12, Comixology Originals Hall).

This is first in a series of specials from Rebellion bringing classic British heroes out of the archive and back onto the page. It follows the company’s acquisition of the vast IPC back catalogue in 2017, creating the world’s biggest archive of English-language comics and encompassing more than a century of comic book publishing.

The Incredible Adventures of Janus Stark collection begins with his very first adventure in the pages of Smash from 1969. Written by Tom Tully and drawn by Francisco Solano López, the series ran in syndication until 1971 and was one of the few to survive Smash’s merger into Valiant in 1971.

Janus Stark is an escapologist in Victorian London who appears to be a simple music hall act, but who privately uses his extraordinary abilities to battle crime and injustice. With an unusually flexible bone structure, Stark is able him to get out of an astonishing variety of tight situations at will, all the while either dressed in a three-piece suit or with his shirt off – a unique, unusual, and quintessentially British character.

Born in 1840 as the orphan Jonas Clarke, he was sent to an orphanage where he was mistreated, but escaped and lived in the streets. There he befriended a beggar, Blind Largo, who taught him pickpocketing but also trained Clarke to use his unique gift. As an adult, Clarke became Janus Stark, escapologist and private detective!
Oliver Pickles, editor at Rebellion Publishing, said: “Janus Stark is such an interesting character, but perhaps more beloved abroad that at home, after all his adventures continued with original stories in his own comic in France which culminated with his death in 1990, and none of those tales have been translated back into English. But this is a chance to restore his profile as a mainstay of classic British comic characters in the start of this series of affordable collections of his adventures.”

The Incredible Adventures of Janus Stark 48-page perfect-bound magazine is out on 27th November and available to pre-order now from www.treasuryofbritishcomics.com. 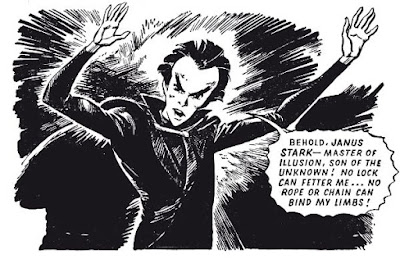 Forgotten they say? Not likely! Ol' rubberribs was the stand-out feature of the IPC Smash!, wasn't he, until Bax's Swots & Blots took a seriously way out turn a few issues in! Now THERE'S another project!

Great news - my favourite comic character of all time. Hopefully it will sell well and they'll bring out a luxury hardback of Janus like Leopard of Lime Street and Black Max.

Can't wait to see who else they take from the archives. Perhaps my second and third faves - Zarga man of mystery from Buster and House of Dolmann from Valiant!

Can't wait! I only hope that a volume of Bradbury's and Campion's work on "Cursitor Doom" follows shortly afterwards

It's interesting that this one is mail order only. I know some people think that the 1960s material, and Lopez' work in particular, is too old fashioned for a large audience. I disagree though. I think Lopez has an international appeal. After all, several books of his adult works have appeared in the USA.

Yes Nigel, a Swots and Blots book would be perfect! Personally I'd focus on Baxendale's episodes from 1969 onwards, avoiding the previous three years of the strip by other artists. (Some people still think Leo created the strip and drew it from day one!)

Second the request for House of Dolmann. Are you out there Rebellion?