Remember, remember... one of the greatest comics ever 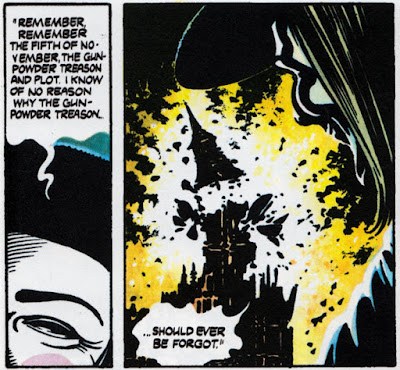 As it's now November 5th it's an appropriate time to remember one of the greatest graphic novels of all time. Or the less pretentious "fat comics" as its author once called such books. V for Vendetta by Alan Moore and David Lloyd made its debut in Des Skinn's anthology comic Warrior No.1 back in 1982, and made an immediate impact on its readers. 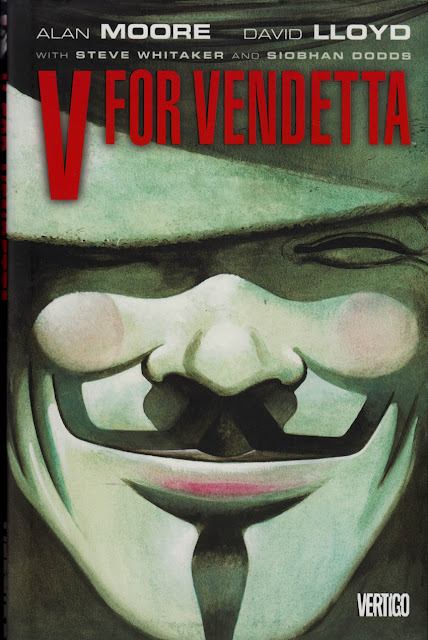 Nothing quite like it had appeared in British comics before, or since. A political thriller with an anarchist as its hero, fighting a corrupted Britain of the (then) near future of 1997. Oh sure, there had been many anti-heroes in UK comics before, and there had been many scenarios of a Britain under a corrupt government (usually via a hostile takeover by a foreign power)... but V for Vendetta was about our own government becoming fascistic, and its treatment of its people. Shades of Orwell's Nineteen Eighty-Four, certainly, but a new concept for a British adventure comic. 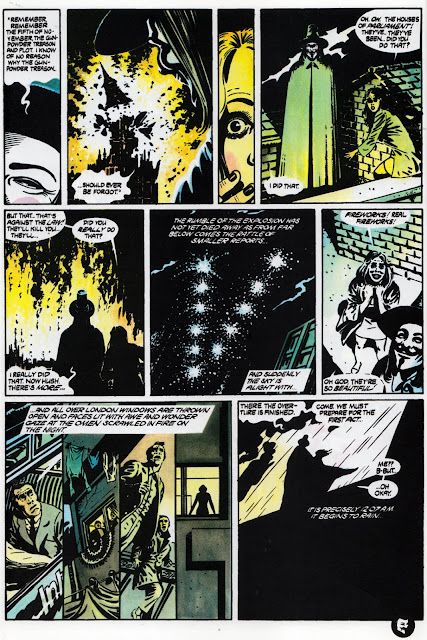 The protagonist had the perfect disguise; inspired by Guy Fawkes and wearing a mask to suit, he succeeded where Fawkes had failed, and blew up the Houses of Parliament in episode one. A few issues later, the Old Bailey copped it too, after V gave a stirring speech about Madam Justice not being the lover he once knew.

It wasn't all about buildings exploding though. The vendetta was dealt to individuals too, who had abused their power and their people. All conveyed with Alan Moore's eloquent writing and David Lloyd's dark, perfectly atmospheric artwork.

There's more to the story than that... but those of you who have read it won't be interested in me writing a synopsis (I hate reviews that are just synopses) and those of you who haven't read it (if you've reached this far) won't want any spoilers. Perhaps your only knowledge of V for Vendetta is from the movie version of 2005? As movie adaptations go, it had its moments (I felt that Hugo Weaving's voice and delivery was perfect for V) but also had too many changes and not the right tone or depth. To experience V for Vendetta at it's best, read the graphic novel.

The original comic strips were published in black and white when it appeared in Warrior, but when DC Comics reprinted it, they wanted it in colour to appeal to American collectors who were more used to colour comics. I still prefer the black and white version, but it has to be said that the subtle use of colours under the guideship of David Lloyd works well.

No article on V for Vendetta today would be complete if I ignored the item of merchandise seen across the world. The 'V' masks, bought in huge quantities and now worn by demonstrators on protests against real life governments. Life has imitated art.

Remember, remember, the 5th of November then... and be safe on Bonfire Night. Why not curl up with a good book instead? And there are few better than V for Vendetta! Check if your local bookshop or library has a copy.

This is was my first Alan moore's book, when I started reading fat comics few years ago. Art sets the tone for the story. I must search my room for this comic and read once again.

Thanks for recalling the memories.