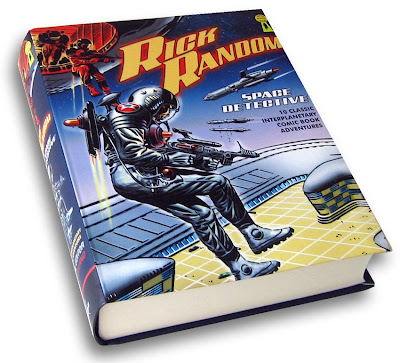 Edited by, and with an introduction from, comics expert Steve Holland, the book features the work of artist Ron Turner throughout. This is wonderful work, showcasing Turner's imaginative view of the future with his smooth distinctive linework. Turner's work is easy on the eye, clearly illustrated, and his artistic skills show him to be a master of black and white work. (He would later prove to be just as skilled in colour work too of course, as his Daleks strips would prove ten years later.) 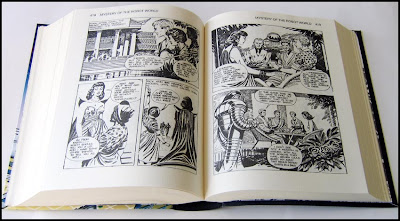 The stories are more sophisticated than the fare that was appearing in Fleetway's weekly comics of the same period. At 64 pages per story, and thankfully no modern "decompressed" pacing, there's a lot of meat on the bones. 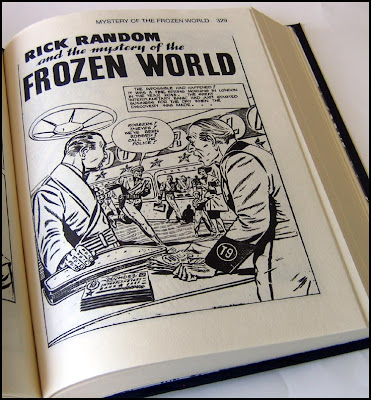 I only have two criticisms. One is a minor point, that the stories don't carry specific dates. We're told they're from the mid to late Fifties, but nothing more accurate than that. The other criticism is that some pages haven't reproduced as well as expected. This is because the source material is the comics themselves, as sadly all the original art has been sold / stolen / destroyed / lost over the years. This means that, unavoidably, some of the finer detail has "dropped out" on a few pages. However, I must emphasize that overall the reproduction is very good and better than some of the repro work in the War Picture Library collection last year. In short, this is a fine collection of one of the best British comic strips to add to your bookshelves.

RRP is £14.95 but it is currently much cheaper from Amazon.

For those who want the dates of original publication, they're available at Steve Holland's blog http://bearalley.blogspot.com/: scroll down to Friday 26th September for deatails.

Lew, I have to agree with you regarding the lack of any original publication dates and also the absence of any real dating info in the Introduction. Additionally, for the new or casual reader, I have no doubt that they might initially wonder if these strips were actually American, but thankfully Steve Holland does confirm their British pedigree at the end of his Introduction.

Even more unfortunate was the acknowledgement given to DC Comics, which again gives the casual reader the erroneous impression that the stories originated in the USA. I'm aware that IPC/Egmont(?) recklessly sold off all their comics' rights to Warner Bros, but I have not seen DC or Warner Bros credited in other British comics reprint volumes, such as Charley's War, the Steel Claw or the Spider.

Despite these initial grumbles I thought the production values were as good as possible, given the available source material and I'm very grateful that someone (Steve H?) had the inspiration to get these classic stories re-published at all. Well done to all concerned. If anyone is listening, could I put in a heartfelt request for a reprint volume or two of Ken Reid's classic 'Jonah' and 'Queen of the Seas'.

IPC sold off their comic rights to Warners, but Egmont (a separate company) still own material. It's quite complex; I think IPC owned the characters published up to 1970 and Egmont owned the rest or something. Anyway, Titan appear to have given up on IPC reprints and are now focusing only on Egmont material (Charley's War, Roy of the Rovers, Buster).

I've just got the HIgh Noon collection and will be getting this one. I've collected all Steve's war collections and the Commando ones. Wasn't sure if I needed this but your review has changed my mind.