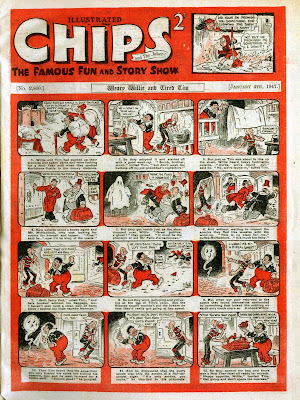 A belated and brief blog for the New Year as I'm currently laid low with that winter bug. Rather than rattle on about 2009 I thought it'd be fun to slip back in time 62 years to look at the New Year's edition of Illustrated Chips and The Joker from 1947...

From here on I'll refer to the comic merely as Chips, as that was what it seemed to be mostly regarded as, by readers and editors. One of Britain's longest running comics, this issue was the 2,800th edition of Chips, - a record rarely matched by other comics. The cover stars were as always Weary Willie and Tired Tim, forever wandering from one fun adventure into another, drawn by Percy Cocking.

By this period in its life, Chips had undergone a few changes. Gone was the tabloid format (although it was still a bit larger than today's comics) and the pink paper had been replaced by red spot colour on its covers. This was no doubt in order to compete with The Dandy and The Beano, but Chips still lacked its rival's full colour covers. The most drastic change though was that by this time Chips was now a fortnightly comic due to wartime (and post-war) paper shortages. 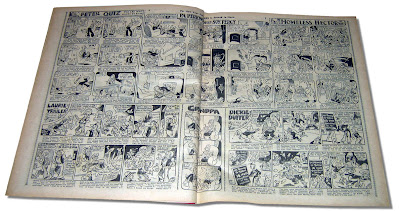 Other than that, the format remained as it had ever been: eight pages including a 50/50 split of text stories and strips. This steadfast refusal to change was perhaps instrumental in why Chips would merge into Film Fun several years later. 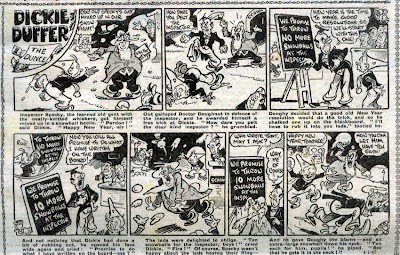 The writing did seem to be on the wall for traditional Amalgamated Press comics thanks to wartime shortages. The long-running Joker comic had merged into Chips in 1940, bringing with it the popular strips Dickie Duffer and Alfie the Air Tramp. The Dickie Duffer strip above is by Albert Pease. Dickie's Teacher doesn't bother using the cane as corporal punishment in this episode, instead relying on the old slapstick favourite of a kick up the arse. 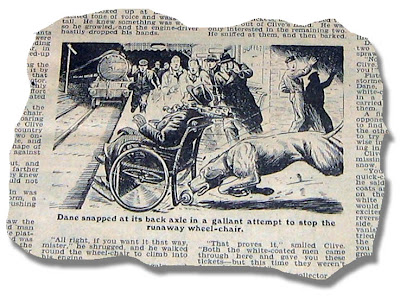 Dane the Dog Detective could easily give Black Bob a run for his money. Somehow though a "clever collie" seemed more believable than a walloping Great Dane. 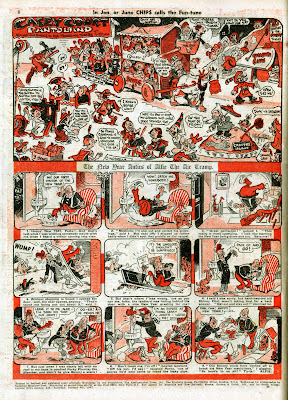 The back page of this issue features the always-popular Casey Court. These intricate fun pictures fascinated young readers and the format would of course be used by many other comics, including When The Bell Rings in The Beano, The Banana Bunch in The Beezer, and Terrors of Tornado Street in Buster. (Not to mention my Super School page in last week's Beano!)

Beneath Casey Court is Alfie the Air Tramp, this time strangely without his mode of transport. Artwork was still by John L. Jukes I think. Identifying some of these artists isn't always easy as they were asked to draw in the house style. That said, their work was full of fun and period charm and the A.P. comics of this era were pure good natured entertainment. 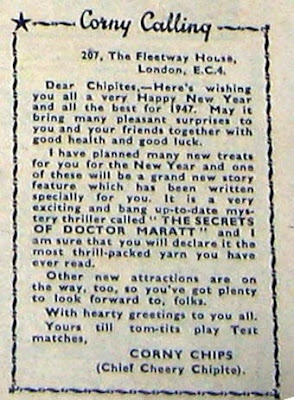 Here's an interesting item above. Although Chips was no relation to IPC's later Whizzer and Chips except in name, the editor of the original, "Corny" (Fred Cordwell?) refered to his readers as "Chipites" - a term revived by Bob Paynter for the IPC version!

I'll cover the history of Chips in a little more depth in a future blog.

On the cover they even have a Joker!! mind you he was from Whizzer..

Love your find of the term Chip-ite.

Hope you get well soon..I'm a bit chesty myself.two years of your wonderful blog..thanks to you..
heres to the next teo years:)

Lovely ! I have found just a set like that on ebay. Chips 2813-2825 july-dec 1947.
Its hard to find any information about A.P.Pease. In Holland ,his version of Billy Bunter was the most populair.And in my opinion ,the best. Thanks to your blog,I discouver more and more about british comics.

Were you the person who bought that set Alex? I bought the other one, - January to June!

He he. No problem Alex. I couldn't afford both so the one set was fine. Glad to hear the other one went to a good home.

Thanks for the reminder of Chips and Weary Willieaand Tired Tim. I first encountered them in a book on comics history (The Penguin Book of Comics or something similar) and later, in the early 1970s, I bought a facsimile (which I may still have somewhere) of a comic or comics (much older than 1947) featuring these characters. It may have been Chips and I think it was edited and/or published by Denis Gifford. Do you recall such a replica? I'll have to root around in boxes in my garage to see if I still have it. Or maybe it's in my mother's attic in Bedford, UK. If so it's obviusly more difficult to get to.

A Happy New Year to you Lew, and I hope you've recovered from the bug. I too caught something very nasty over the Christmas period, which has left me still feeling a bit tired and washed out.

A great blog on 'Chips', one of my favourite comics and one the first two truly famous comics to be published in the UK (the other being Comic Cuts). Both comics had life spans of over 63 years; a record that only Beano and Dandy have since broken.

While it is fairly well known that Chips and Comic Cuts were both cancelled on the 12th September, 1953, it's not often remembered that a third long-lived title 'The Wonder'(1892-1953)was also cancelled on that same date. Perhaps it was because Wonder/Funny Wonder had numerous convoluted name changes, complex re-numberings, re-launches and amalgamations over the decades, so it probably didn't remain in the public's memory like the other two.

It wasn't just the longevity of Chips that made it special to me, but it was also the longevity (and fame) of some of its characters; Weary Willy & Tired Tim, Homeless Hector and Casey Court all continued for dacades right up to the final issue.

Casey Court was also expanded to a full strip (full colour too) when they were promoted to the front page of Puck, circa 1904-08. The fact that a Casey Court stage show was touring the Music Halls and gaining some fame around the same time may have prompted their promotion to front cover status!

As for Alfie the Air Tramp. I'm not too sure about the artist here, but think it could be Arthur Martin (only a guess). As you say, it's very difficult to cut through the house style, but there was something about the characters' legs that didn't seem like Jukes' work. I did some digging and discovered that John Jukes apparently stopped drawing 'Alfie' in 1943, although some of his strips were reprinted between 1951-1953. We'll never really know!

With Dandy and Beano now over 70 years old,they are now older than the original 'Big Two'.Let us hope that unlike Chips and Comic Cuts, they can continue to appeal to kids for years to come. Both comics have made efforts to modernise, so maybe they won't suffer the same fate as the original Big Two.

Thanks Dave. Fascinating info as always. I didn't know those three comics were cancelled in the same week! Truly the end of an era then.