The Penguin Book of Comics 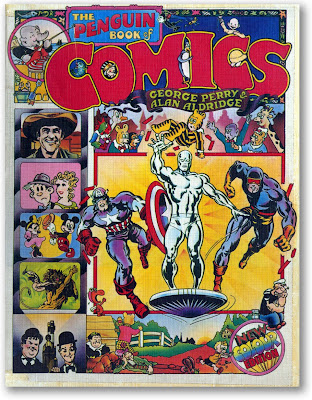 I was bitten by the comic collecting bug very early in my life. From about the age of eight I started saving my comics. At that time Marvel were publishing a 68 page reprint called Fantasy Masterpieces which represented Golden Age (1940s) tales of Captain America, Sub-Mariner, and the original Human Torch. I thought it was a great comic and it made me appreciate that there had been comics around long before I was born.

Fantasy Masterpieces had given me (and thousands of other kids) a taste of a sense of history about American comics but there seemed to be nothing similar to educate us further. That was, until I saw The Penguin Book of Comics in my local WH Smith one day in 1971. 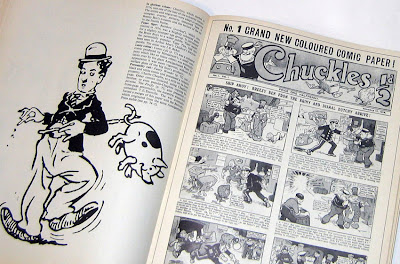 The Penguin Book of Comics had in fact first been published in 1967, but it was the updated 1971 version that was my first exposure to it. The outstanding cover by contemporary pop artist Alan Aldridge was what first caught my eye. Aldridge had basically copied characters from various points in comics' history but the composition and colour he'd used for his cover was its strength. Never again, to my knowledge, would the Silver Surfer, Tiger Tim, Tarzan,Weary Willie and Tired Tim and more appear in one illustration. 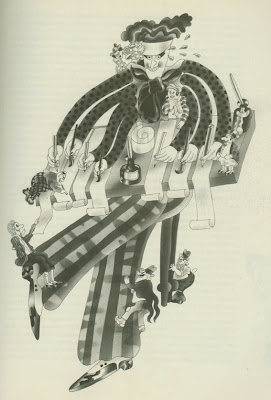 The book itself, a 272 page softback, featured lots of Aldridge's work inside too, in monochrome, with illustrated chapter numbers and various full page drawings. However the main point of the book of course was its information on the history of comics written by George Perry, then assistant editor of the Sunday Times Magazine. As far as I know, The Penguin Book of Comics was the first book of its type to cover the histories of American and British comics. (I'm sure someone out there will correct me if I'm mistaken.) 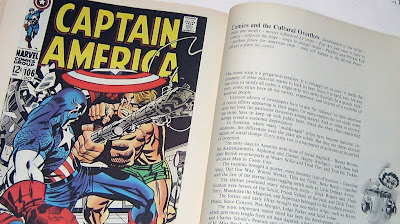 I had the book as a Christmas present in 1971, but for weeks before Christmas I'd regularly venture into Smiths and browse through a copy, totally engrossed by the full page images of comics from long ago. Here was a book that treated all comics equally; British weeklies, American comic books, and newspaper strips from both countries, plus the alleged origins of the caricature dating back to cave paintings from 4000 B.C! 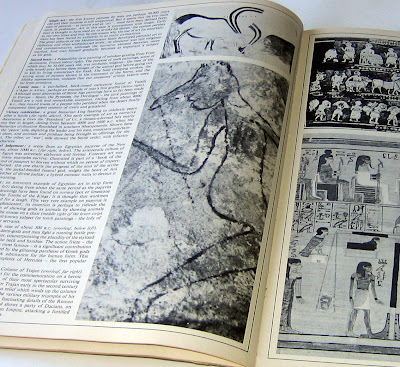 In retrospect The Penguin Book of Comics tried to cover too much in its pages. There were also glaring omissions too. Apparently neither DC Comics nor D.C. Thomson would grant permission for artwork to be used in the book. (Although there was some artwork from DC Comics used in the 1967 edition.) Nevertheless, the book was an excellent introduction to the history of comics and really fired me up to learn more. The fact that it treated UK and US strips equally ensured that I always considered them equal too, and thankfully never went down the "our comics are best" alleyway. I was however particularly interested in the chapter on British comics as they seemed to have evolved quite considerably for each generation. 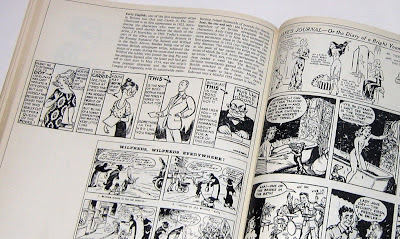 The Penguin Book of Comics was incredibly inspirational for me, cementing my interest in comics at an age (12) when I might have otherwise lost interest in the medium. Copies still turn up on eBay and I would encourage anyone with a curiosity of comics history to buy it.

Since then of course there have been numerous books published on comics' heritage. Some have chosen to focus more thoroughly on one area, such as Paul Gravett's Great British Comics but I think the closest in terms to the Penguin book is the excellent The Essential Guide to World Comics by Tim Pilcher and Brad Brooks. Published by Collins and Brown in 2005 this 320 page softback covers the basic histories of comics from Britain, America, Japan, Scandinavia, Europe, and beyond. 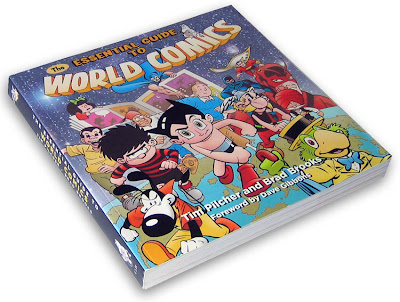 With the millions of comics published over the decades, and the thousands of creators involved, the story of comics will never be complete. Happily this means that there will always be new areas for comic history books to cover that we can add to our already creaking bookshelves. More importantly, the legacy of comics will be kept alive for new collectors to discover.

One of my students on my Fantasy Art Unlimited Course, Lauren, bought a copy of the PBoC just before Christmas from a book shop, which has old books for a couple of quid at the most.

It's a great little tome and she is thrilled to bits with it.

I had a look through it when she brought it in.

She got one ecch of a bargain there.

I'll drop you a line later to see how things are off-line here.

I always loved this book as well and must have had a copy circa 1971, 72 something like that. Even when the over got deatched I still loved it... but it's long lost now sadly. Always wondered which Spirit story the sequence included was from? The theatre sequence with the blade that was supposed to be fake but is actually real?

I remember the book very well.
I tripped over a great pocket book version of "Comics: Anatomy of a Mass Medium" by Reitberger, Reinhold & Fuchs when in Germany in the Seventies - (and as you DIDN'T say, those were few and far between experiences in the 70s!). Whilst I was learning the lingo, it was beyond me except the reproductions were fantastic! The one shot of Prince Valiant in his boat heading towards a city was worth the price alone. I later found the larger UK version and found that a lot easier to read. Where is it now? Wandering the Earth, hopefully giving someone enjoyment!

Sigh.
I still have the Penguin book, a cherished Christmas present from my early teens. (My mother later dutifully wrapped the cover in thick, clear plastic, which is still taped to my copy.) I wrote to the author, George Perry, and got a reply, which, sadly, was discarded with a lot of other stuff after I moved back to the States. The very next Christmas I got "Anatomy" but later loaned it out and decided to let a friend keep it. But a few years ago I bought another vintage (1971?) paperback copy of that book via Amazon.

Before the Penguin book all I knew of comics history was from articles in popular news media or in comics themselves. When I heard of that book, I wanted it badly. Even put the poster of it on a wall.

Months after reading the Penguin book I made a point of finding and buying copies of the Spider-Man issues (the famous anti-drugs story) without the Comics Code seal.

I can remember getting a copy of the 1967 edition of the Penguin book at a jumble sale in the early '80s, when I was very young indeed. I loved it, and was fascinated by the glimpses of strips I would never had any exposure to otherwise. Krazy Kat in particular was a story that became cemented into my subconscious.

I believe my dad threw the book out over 20 years ago when we moved house. Still haven't forgiven him for that, but a couple of years ago I managed to purchase a copy of the 1971 edition off ebay. Needless to say, I was dead chuffed.

Regarding the DC artwork, I was pretty certain I could remember part of the Batman origin story being in my original copy and was a bit surprised to find it wasn't in the later edition, so it's nice to have confirmation that my memory isn't playing tricks on me.

Does this book pay much attention to the Story Papers or not? Or is "Boys will be boys" the only real source for them (well that and the seemingly super-rare "Penny dreadfuls and comics", relating to a 1983 exhibition, that i had to pay £16 for.)

What was that strip they had a clip from in the PboC..where they were on about Bagel lox or something..Yeah I used to have this book as a kid in the seventies

What was that strip they had a clip from in the PboC..where they were on about Bagel lox or something..Yeah I used to have this book as a kid in the seventies