Reaching for the unattainable 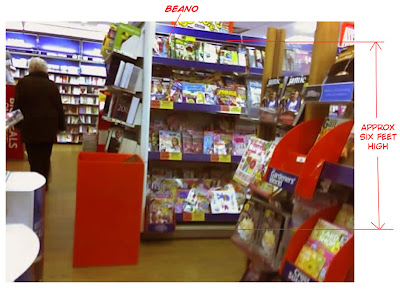 In these days of shrinking magazine and newspaper sales one would expect retailers to do their bit to help publishers sell as many copies as possible. After all, higher sales are in their interests too. Therefore it's puzzling as to why the new shelf displays in some High Street retailers actually put the comics OUT of the reach of their target audience.

Witness the photo above. The smart new displays give the comics more breathing space than they had before but the height of the shelves puts certain titles way out of the reach of children! Whilst the nursery comics are on the lower shelves easily within view of young children, the top shelf contain The Beano, BeanoMAX, Dandy Xtreme, Toxic, and others - at a height of approximately six feet! How is the target audience of 7 to 11 year olds expected to even notice those comics, let alone reach them? Established readers might strive to look for their favourite comics (and ask a parent to reach up for a copy) but how can a 7 year old discover Toxic or The Beano for the first time when it's positioned a couple of feet above his head and way out of his eye line?

In 1986 retailers "top shelved" Oink! comic because they bizarrely considered it unsuitable for children. Now, The Beano etc are receiving the same limitations in some stores but this time it's because of bad planning rather than censorship. Is it any wonder comic sales are falling? And how much shelf rent are these retail giants charging the publishers for this "service" anyway?

Lew, great topic talking about the pity of book shops giving a cold shoulder to comics. It indeed is a strange way the comics are stacked on the book shops. Inevitably in the deep corners of the shop or on the higher rags, or most of them in in the lower locked compartments, and I find this evident in every shop also over here in India.

When will the comics get their due credit, as the 9th Art. Only time should answer.

It's even worse in WH Smiths Ipswich. Not only are the children's comics stacked up high like your photo, but they are on the end of an shelving isle. That would be fine if all the music magazines weren't shelved on the end isle opposite. The gap between the two isles is small, you can just about get two people standing side by side there at one time. Not suitable for parents with push chairs either.

I never realized there was a 'racking fee' in WHS until recently. Surely this should just be called 'a bribe'? It doesn't even guarantee a good space on the racks from what I hear. Anymore details on how it works exactly, please?

As I understand it Reuben, publishers are charged a graduating fee depending on how well placed the mags are. Closer to the front, and eye-level, costs more than being placed at the back in a lower or higher position for example. I heard that last year a top film magazine paid £25,000 for an issue to be displayed in a special front-of-store box.

Rafiq, interesting and saddening to hear that the situation regarding bad display space is the same in India.

I hate seeing this. Fortunatley the comics at my local ASDA store are all within reach of children but unfortunatley they are a total mess, sometimes you have to play 'spot the Beano' what can be done? Its like they don't want them to be sold. Unusual approach for a shop to take!

I like how you keep highlighting this Lew however what could be done about it?

There is a certain amount of politics to racking, especially in the Midlands. It doesn't happen everywhere, but when it does it comes as a result of the 'Morning Star' politics of some of the people involved. Ever wondered why the socialist Morning Star newspaper gets stocked even though no-one ever buys it, and why it's always so prominently displayed? I guess there may also be some political correctness in deciding where to position other titles too?

I can't say I've noticed many shops stocking the Morning Star in my part of the Midlands. And our local rag keeps giving promo pieces to the BNP so not much political correctness here unfortunately.

From what I understand distributors can only advise stores to put magazines/comics in certain locations. It's really up to individual stores to decide where titles are racked. No two stores are alike even in the same chain. You have to wonder at the logic of putting kids comics at such a height. Some stores get it right but I have seen Toxic in a variety of different locations including being racked with the specialist video game magazines.

Lincoln Smith's seems to have a rather more sensible option. Nursery comics at the bottom, Beano etc just above them at child-accessible heights, Marvel, DC and Commando are then on the next shelf up and accessible to thier older children/young teen audience. Finally 2000AD and the like are above these slightly and right at the back, so they can't be picked up by younger kids. The comics are right inside the entrance too. Though often "behind" a rotating stand with those "experience day" packages, or else magaines like The Economist and the like.

The Lincolm branch seems to have the right idea, and is using the shelves probably as intended. Sales reps really should be monitoring the situation in every branch but they seem more interested in the chocolate promos at the cash desk these days.

Perhaps I can throw some light on the situation.I work in a supermarket and the thing is this.Comics like Beano etc which usually come with free gifts and so are attractive can be subject to theft by little fingers.Also,a rack can become a library for kiddies while mummies are elsewhere!This is true and I've witnessed it!Also,copies are usually stacked in columns of fifty or thereabouts,depending on sales.Of course,daily newspapers will get more space as they are typically guaranteed to sell.Unfortunately,fifty or more copies of children's comics are not.Simple sales.And that is the bottom line.All that matters is the margin.Life is brutal!Sales reps have a job to do,and until D.C. Thomson start employing reps to look out for their stock or start paying premiums to pay for "dumps" as we call them,prominently displayed in store,the situation ain't gonna change!

Publishers are already paying thousands to retailers for shelf space. Surely it's up to the retail staff to discourage kids from stealing/damaging stock, NOT up to the publishers to police it with more sales reps?