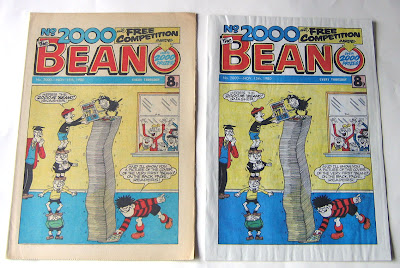 The series of classic UK comic reprints that began in The Guardian yesterday have proven to be better reproductions than anticipated. In fact they're pretty close to being exact facsimiles.

Yesterday saw the first comic giveaway, a copy of Jackie from 1975; all 36 pages reprinted on glossy stock similar to the original. Today, The Observer gives away a reprint of The Beano No.2000 from 1980.

Comparing the reprinted Beano beside the original there are few differences between them. The paper stock on the reprint is slightly better than the 1980 version and the comic is stapled rather than glued (as old D.C. Thomson comics were), but otherwise it's pretty close. The reprint has been scanned from the original comic so this has meant a slight difference in the shade of blue, and a few other minor variations, but it's a great restoration job and a fine facsimile. 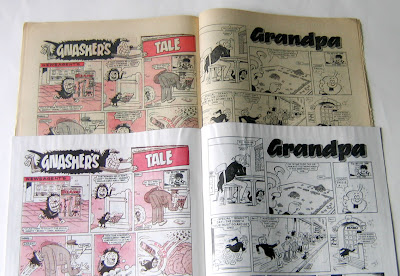 Beano No.2000 is a good choice of reprint too, considering issue 3500 is in the shops right now. The differences 1,500 issues on are quite considerable. Today's Beano is full colour, has almost twice as many pages and is glossy, - and costs £1.25 compared to its 8p counterpart in 1980.

This is a great start to The Guardian's classic comics series and things look promising for the week ahead where collectible items will include the Bunty Summer Special from 1972 and the first issue of Tammy. 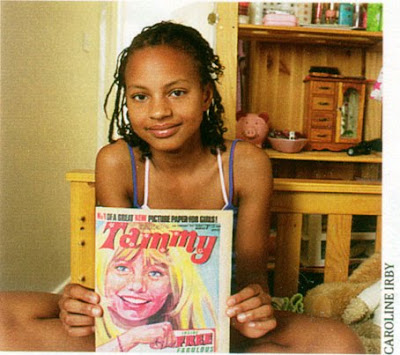 Above image taken from The Guardian website, showing the rare Tammy No.1 that will be free in The Guardian on Thursday.

Yesterday saw The Guardian's Guide supplement run an article on that era of UK comics. Unfortunately I was misquoted as saying of British humour comics: "It's a genre that doesn't exist any more" when in fact I was only referring to a style of comic of the 1950s that Viz spoofs. Of course the genre itself still exists, - I make my living out of it! Newspapers eh?

I thought the freebie was an original for a moment - thought they had some old stock that they'd bought from DC Thomson. They are great - ROY OF THE ROVERS today is excellent too. I hope the GUARDIAN can do this again.

well that must have been the first edition of Roy of the Rovers I've ever bought! Liked the best wishes sent to Roy Race from real life celebs.

Going back to The Beano 2000.. what's with the initials 'MIA' that appear on the windowsill on the cover of the reprint version? I can see from your scan that its not on the original.

Has been an excellent give away - my son preferred the 1980 Beano to the one he gets every week now, something about the violence being better...

The Bunty however, was horrifying - full of girls sacred of mice and enjoying housework. Subversive stuff.

According to the National Archives currency converter that would work out at 23p in today's prices. And in 1985 the price was 16p which is 32p at today's prices.

When did comics start rocketing in price? And have there been any attempts in the UK to try to bring prices down, or do the logistics make that impossible? (I remember when in the mid 1990s Marvel US launched the $0.99 line in an attempt to make cheaper comics available - and the newsagents refused to take them as the cost was too low!)

Prices seem to have been increasing regularly for years. To be fair, production standards have also improved. That 8p Beano had 20 pages and was mostly black and white or two-colour on newsprint. Today's edition has 32 glossy full colour pages.

Falling circulations also bump up the price, as well as the high prices supermarkets and retail giants charge just for shelf space, - which didn't apply years ago.

They were all brilliant. I was in comics heaven. I never read Tammy so was really impressed with it! It seems to have been a big hit with Grauniad readers too judging by the letters page.

I noticed that too Chris. No idea, unless it was just something to distinguish it as a reprint?

Hi Staticgirl, yeah this promotioon does seem to have generated a bit of comment in the paper. The Guardian never repeats its giveaways but hopefully they will with these. Would be good to see another selection.