The Best of Battle is here! 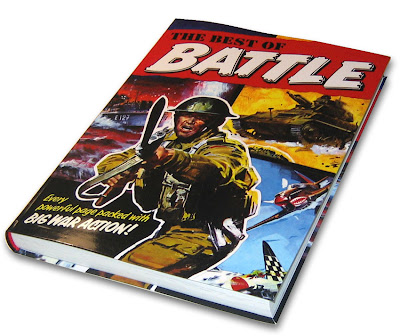 Titan Books' long-delayed The Best of Battle has finally been published and, to coin a cliché, has been worth the wait. A chunky 288 page collection of strips from the long-running Battle Picture Weekly comic of the 1970s (then published by IPC, but now owned by Egmont) which features artwork by some of the industry greats.

Inspired by D.C. Thomson's Warlord comic, Battle (as it became known) was a far tougher comic than most of its predecessors at IPC (such as Jet and Thunder). Whilst these stories still stray into the cringe worthy "Achtung Englander" type territory, and D-Day Dawson's exploits are somewhat far fetched, they also offer a grittier portrayal of warfare than had been seen in other comics of the period. 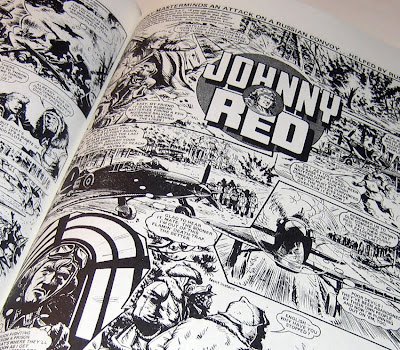 The book reprints a selection of stories from 18 different strips, ranging from the obvious choices (Charley's War, Johnny Red) to the more obscure (Panzer G-Man, Crazy Keller). Each strip is fronted by bonus material, - brief background notes on the characters and anecdotes from people who worked on the comic such as Pat Mills and Dave Hunt. 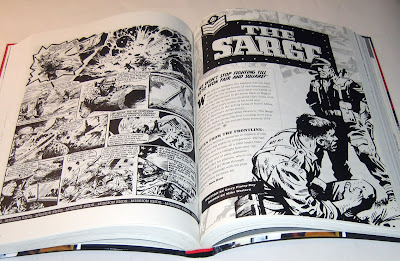 There are a few little mistakes in the book. At one point Mike Western is referred to as Chris Western (mixing him up with modern artist Chris Weston), and the D-Day Dawson art is solely credited to Colin Page when most of the selection features Geoff Campion art. It's also a bit strange that whilst we're told that Hold Hill 109 was a complete mini-serial in just six episodes the book stops short at chapter four. However, these are minor niggles and not something that should deter buyers.

Titan have wisely presented the book in a cheap softback value-for-money format for a R.R.P. of £9.99 rather than the hardback slick format of their Steel Claw and Spider volumes. Nevertheless, reproduction is first rate, with solid black inks and good clear linework.

The back of the book offers a welcome surprise for fans of the genre: "coming soon" from Titan Books will be individual solo collections for Johnny Red, Darkie's Mob, Rat Pack, and Major Eazy.

The Best of Battle is a superb collection of some of the finest UK adventure strips of the 1970s. With artwork by Joe Colquhoun, Geoff Campion, Carlos Ezquerra, Mike Western, Eric Bradbury and more it's a perfect example of a solid era of British comics. Copies are available from the Forbidden Planet website at a discount and you can order your edition here:
http://forbiddenplanet.com/37606-best-of-battle-volume-1/?affid=stringer1959

Solo collections? Brilliant - other than Darkie's Mob (reprinted in Judge Dredd Megazine), I've only been able to hear about these strips. It's annoying having so many British strips that get mentioned and lionised but no way of seeing 'em.

Thanks for the heads up! Been looking forward to this.

You might wish to try The Best of Battle first Charles, to give you a taster of each strip. Not all of them are as gritty as Darkie's Mob but they're all enjoyable in their way.

Hopefully this collection will include some of my old pal Patrick Wright's "Hellman of Hammer Force". I remember him telling me once that Dave Hunt who was a really lovely guys and just wanted to edit "Roy of the Rovers" used to get a bit concerned about the oodles of ultra violence that were being injected into the comic. There was one particular Pat Mills script that Patrick had artworked with real gusto that involved a fiendish plot to detonate bombs that had been pre-implanted in scientist's craniums. The resulting splash page which involved bits of head, brains and a full set of teeth, flying everywhere was a source of real concern for Dave who phoned Patrick up and with mournful tones said, "Patrick those teeth are just going to have to go".

No Pat Wright Hellman strips I'm afraid. The ones chosen are by Mike Dorey and Jim Watson.

Thanks for that Lew, I'm still going to invest in this though, as there's a lot of other stuff in there and the cover looks really the biz.

You're blog is what convinced me to invest in the Marvel Omnibus's last year and I'm glad I did when I look at what the FF books are now going for. I loved the way you actually photographed the books as well as reviewed them - really helpful.

Thanks Peter. I know some people would prefer flatbed scans of pages to photographs but my reasoning for sometimes using the latter is a) spines can be damaged by opening the books too flat, and b) I like to give the reader a sense of the format and weight of the books / comics. That's also why I add dropshadows to the book cover photos; to give a three dimensional feel to the experience. Glad you appreciate it.

As for those who would prefer I reprint every page of a comic; sorry, but for copyright reasons that's not going to happen.

Kind of given up on this ever appearing, so its a bit of a shock to hear its finally out.
Could order it online and make a bit of a saving but i want it NOW - so off to Waterstones tomorrow.
Great news about the solo collections (esp Rat Pack) and am not bothered whether its a bumper soft cover like this or a slimmer hardback. Just as long as they're out.

I'm not sure if Waterstones have it yet but good luck!

Battle ! How I loved that comic. Thanks for the info.

Happy to say that Watersones did have it this morning.
So, looking forward to locking myself into the toilet (since having children, the only place i get peace so has become my library) later on.

Why didn't Titan do their Johnny Red and Major Eazy books in this lovely softback foremat? The hardback with dustjacket foremat is too over the top for collecting these stories. Keep them cheap and cheerful and they'll sell better. Charleys War is the only battle strip deserving a hardback foremat. The rest? Put them out cheap and they'll sell better.

Well, I must admit I also prefer the softback format for those books.