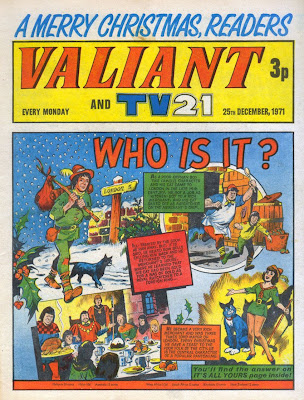 This year, instead of a huge cover gallery of Christmas comics (which last year practically used up all the ones I had anyway) I'll be spotlighting just four individual titles, and taking a more thorough look at each one. The plan is to run one a day over the next few days. Which comics will I feature? Make your guesses now, although none will be more recent than this one.

Today it's the turn of Valiant, dated 25th December 1971. No snow on the logo, but nevertheless it's a fine festive cover by Mike Western. This IPC weekly had been running for almost ten years by this stage and over that time had absorbed the original Knockout, Smash! and, as the cover to this issue makes clear, TV21.

TV21 was well past its glory days by the time Valiant swallowed it, bringing in only Star Trek and the non-tv strip The Tuffs of Terror Island (a silly watered down rip off of Lord of the Flies plus giant seagulls. If you never saw it you didn't miss anything).

Valiant was clearly proud of its Star Trek acquisition, devoting the colour centrespread to it every week. Unfortunately the storylines were traditional boys' adventure comics fare and their characterization of Mr. Spock was more hot headed than the emotionless Vulcan of the tv series. However in the strips favour it had John Stokes as the artist, producing strong, rich artwork that more than made up for the weaknesses of the adaptation. 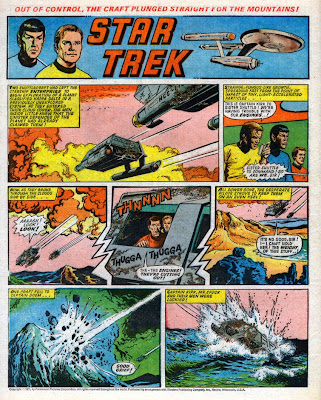 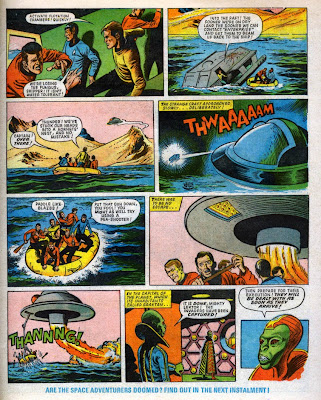 Although this was the Christmas issue, Star Trek didn't even mention the festive season. Neither did most of the adventure serials in the comic, as dropping in a Christmas reference would have been too contrived even for Valiant. Some of the strips did make the connection however, including Janus Stark which ended the escapologist's current adventure by having him pose as Father Christmas for the orphans. Artwork by Solano Lopez. 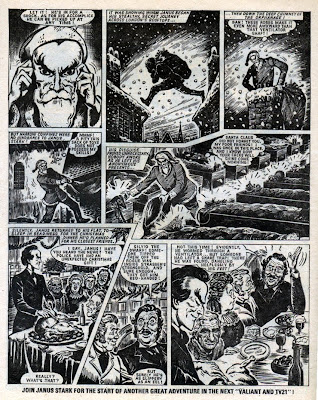 Also showing some Christmas spirit was Captain Hurricane, taking time out from Nazi-bashing to have a Christmas "nosh-up" with the troops.

The festive feast had long been a traditional ending to a Christmas strip in British comics, and in 1971 The Nutts were no exception. Nadal's final panel shows the family around the table and the caption even refers to it as a "slap-up feed", - a phrase now only used in satires of the medium. 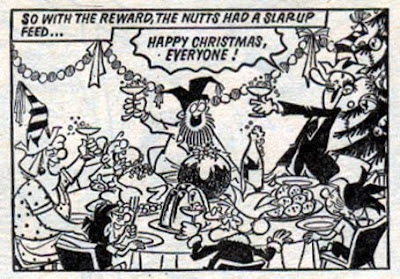 Reg Parlett's The Crows was another long-running humour strip in Valiant. These half page slapstick strips were ideal to lighten the tone between the adventure stories. As ever, Pa Crow's plans backfire on him, even at Christmas. 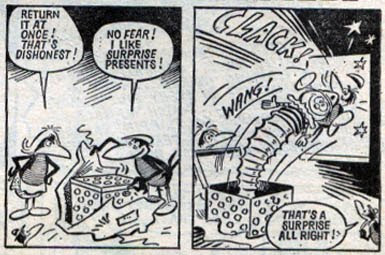 The Return of The Claw, the revival of The Steel Claw strip, was in the course of a long-running (some would say too long-running) serial pitting Louis Crandell against Midwich Cuckoo type children and their alien masters. Superb artwork by Jesus Blasco worth the cover price alone.

This issue is notable for a reason other than it being the Christmas edition, for it features the final episode of His Sporting Lordship, which Valiant had inherited (no pun intended) from Smash! After almost three years, Henry Nobbins' comedy-adventures were over, and the characters bowed out in another traditional British comic manner by going on holiday. This kind of happy ending, - the holiday that never ends, - was for boys' comics what a romantic happy-ever-after conclusion was for girls' publications. However artist Douglas Maxted has even snuck in a little suggestion of romance too, with the bikini-clad girl beckoning Henry to follow her into the sea. Almost daring for an IPC boys' comic!

Another strip that had arrived via Smash! was The Swots and the Blots, which Leo Baxendale had begun illustrating when Odhams had become part of the IPC empire in 1969. Baxendale could always be relied on to provide the laughs and this festive strip, with background gags in almost every panel, is a prime example. 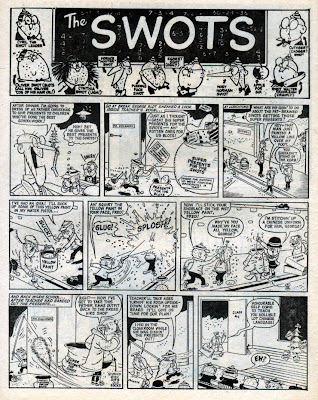 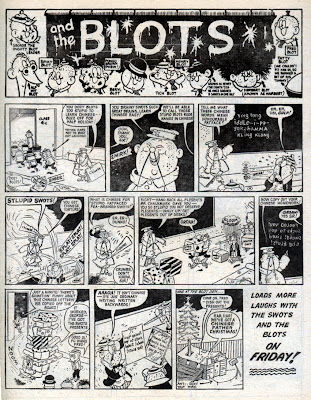 Finally, a full page advert from the issue, including a teaser for the replacement strip for His Sporting Lordship, which would also be drawn by Doug Maxted - Yellowknife of the Yard. This retrogressive strip ("Red Indian" detective working for Scotland Yard) was the sort of thing one would expect in a comic of the 1940s not the 1970s, and seemed to be an indication that Valiant was starting to show its age.

In another ad on the page the popular Please Sir! tv sitcom announces its movie debut (which actually tied into the continuity of the tv series). For the benefit of Valiant's young audience the ad has been doctored before publication, - Sharon (22 year-old Carol Hawkins) was showing her knickers in the original movie poster!

At the foot of the page, three IPC annuals are promoted, from the days when annuals truly were on sale in "newsagents and booksellers everywhere".

Another Christmas comic under the spotlight soon!

Just been ploughing me way through your last year's covers , what a haul. Fab stuff..

Very nice to see your review..
and more to come I'll look forward to it..

Was Billy Bunter inside this issue?

Yes Peter, but I believe it was a reprint this issue so I didn't mention it. Also included were the long-running Kelly's Eye and The Wild Wonders strips, but they didn't have a Christmas theme.

No one ever believes me but the big screen outing for Please Sir! is actually my favoutie movie. It's just one of those films that always makes me chuckle and smile.

The long-running Raven on the Wing was in there too with a particularly dynamic and grim instalment as he smashed up a local cafe, using a chair leg to beat up a local gang of toughs who'd previously attacked him with bottles and clubs on his encampment. An early taste of the urban aggro that would be much more prominent in the later Action, perhaps, and art highlight of the issue for me - though not especially Christmassy either!

I kind of see your point on the Raven on the Wing strip although it's not as gritty as Action would be. It came across to me like more of one of those daft "barroom brawls" in Westerns, in that Raven breaks a chair in half over a thug's head and the guy's hardly fazed. The art makes it look grimmer than the script expected it to be, I think.

No, it's not as gritty as Action but there are certain *elements* there that people think only came much later in the IPC comics.

The previous week's instalment had a tough feel, too, with Raven attacked in his camp at night by the thugs (one carrying a wrench) and Raven is bottled hard over the head by one of them. It was a hurled bottle that helped to get Action banned some years later wasn't it, in Look Out For Lefty, also penned by Tom Tully.

Maybe you'd consider putting up page one of the Raven strip to see what everyone thinks 'cause the art really is great Lopez ... albeit none too festive.

It might be worth doing as a blog entry in it's own right. I have all the Valiants from that period so I'll check it out and see what I can come up with.

I am currently reading a pile of IPC Smash that I got from ebay. One thing I like about "His Sporting Lordship" is the characterisation put into the faces. The saucy maid (in the bikini) is in it from episode one, but all the castle staff have their own individual identity.

I must have switched to Valiant when they merged, but I can't remember much about it -- I'm pretty sure I got bored quickly and switched to Countdown when it started coming out (early 1971?).

One strip I really enjoyed in Smash was "Battle of Britain". I ignored it at first as I thought it was another boring war story (note how they dropped most of those when they revamped Smash with the Simon Test mini-relaunch). I remember reading a later one, then going back and reading all the episodes from the start when I realised how good it was.

The art in "BoB" is particularly good, in the early episodes they used some kind of duo-tone board for the splash panels. I have no idea who the artist was. One thing I wonder, did it transfer to Valiant? Did they ever conclude the strip, or is Britain still under the thumb of Baron Rudolph with Simon Kane (and his West Indian assistant, Tubby, quite a progressive character for 1970) still leading the resistance? This was an excellent strip and there seem to be few people who remember it.

I'm going to stick my neck out and say that Yellowknife of The Yard was one of Valiant's better 70's strips - there's just something about the relentlessly offensive portrayal of Native American culture, combined with the goofiness of Yellowknife's enemies (e.g. The Wimp, a sportsman so inept he shoots any lackey who bowls him out when he's playing cricket) that makes the whole mess oddly endearing.

I understand that John Wagner wrote Yellowknife, so that in itself puts it a notch above most of the other strips as far as I'm concerned.