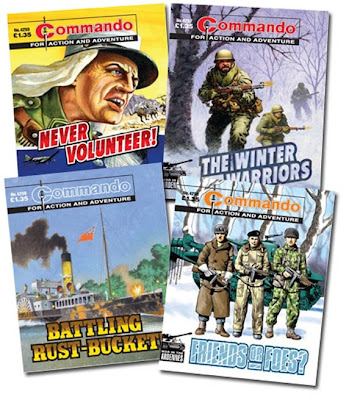 The end-of-year issues of D.C. Thomson's Commando have arrived in shops a couple of days early due to the holidays. Out now are the following four editions, with information kindly supplied by editor Calum Laird...

The Dakota droned away and the canopy cracked fully open above Bob Slade, a private in the Parachute Regiment. He adjusted his rigging lines and took a quick glance at the barren desert wastes below.

Unlike his mates descending all around him, Bob had been here in North Africa before — as a soldier in the French Foreign Legion, charged with the murder of an officer. And he knew as well as every other Legionnaire that the Legion never forgets…nor forgives!

The Duchess of Alna was a pleasure boat by trade, more suited to ferrying holiday-makers than going to war. Yet that’s exactly what she had done in 1940, as one of the heroic “Little Boats” of the Dunkirk Evacuation.

And now, more than fifty years later, when some said that she was only fit for scrap, this unlikely battleship was off to the rescue again — slap in the middle of a war-zone!

Gordon and Jeff were both staff artists. Jeff’s stuff was seen throughout the Boys’ Papers but Gordon was almost exclusively Commando. On average he took 4 weeks to illustrate a complete book.

The two new stories are both set in the Ardennes as it was 65 years ago this month that the Battle of the Bulge was fought there. The Winter Warriors is the last new book drawn by the late Ricardo Garijo, completed before Need To Know but held over for the Ardennes connection.

The Ardennes, December 1944. In the murderous confusion of what became known as “The Battle Of The Bulge”, Allied soldiers warily stalked the frozen wastes and eerie forests of the battlefield, aware that at any moment they could be cut down by enemy gunfire. Not to mention marauding Nazi panzers or the terrors of hidden minefields.

When the Germans launched their Ardennes offensive — the desperate last-ditch “Battle Of The Bulge” — in December 1944, they sewed seeds of confusion amongst their enemies by using special units dressed in Allied uniform.

Calum has also supplied an advance look at one of next month's issues, with the following info: "We’ll be starting the year by re-issuing the first book featuring an Ian Kennedy cover by way of thanking the man for 40 years of sterling service to Commando. The book is No 453 from... 1970... And is titled Seek and Strike". 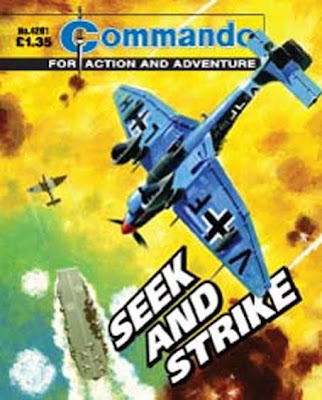 Interesting news about forthcoming the re-issue of an Ian Kennedy cover because I can't help but feel most of the recent, new covers have been lacking something.