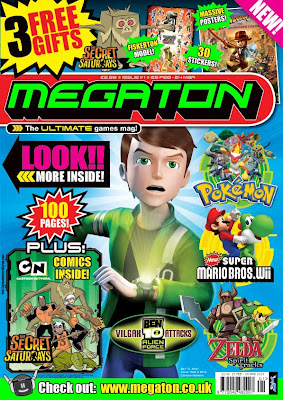 Today sees the launch of a brand new 100 page magazine for kids, - Megaton! The focus is on video games and there's a 16 page comic section, albeit American material and not originated British strips. Nevertheless, if this first new release from Skyjack Publishing is a big hit who knows what may follow? Over to the official press release for the lowdown...

From the creators of TOXIC and The Official Ben 10 Magazine comes MEGATON – an all-new video game magazine for kids aged 8–12!

Packed with the latest video game reviews and characters, as well as exclusive Cartoon Network comic strips, brain-scratching puzzles and amazing competitions, MEGATON is on sale every four weeks.

Each issue of MEGATON is bursting with 100-pages of cool content and includes fantastic multiple paper-based gifts to collect, from sticker sheets and posters to 3D card models and trading cards, all guaranteed to keep children entertained for hours!

“MEGATON is the only magazine in the children’s market that offers 100 pages of pure gaming and comic content,” said SkyJack Publishing’s Managing Director, Matt Yeo. “We’ve created a truly exciting magazine that showcases kids’ favorite characters and brands in a unique and innovative format, and it’s one that also offers parents real value for money.”

“The addition of officially licensed Cartoon Network comic strips is fantastic news for us and our readers,” he continues, “as it will bring children back to the magazine time and again to read more about the TV shows they regularly want to watch.”

Says Alan Fenwick, Vice President, Turner CN Enterprises, “We’re delighted to be working with SkyJack Publishing on the launch of MEGATON. The magazine is a great brand extension for us and provides the perfect platform for kids and parents to interact with our properties.”

MEGATON # 1 includes a free Tatsunoko Vs. Capcom A4 sticker sheet (featuring 30 stickers), a double-sided LEGO Indiana Jones 2/Bakugan Brawlers A1 poster, and an A4 card model sheet for kids to make a cool character from the hit Cartoon Network TV show, The Secret Saturdays!

In addition to the magazine, Eurogamer has created a fantastic interactive website that ties into the print offering. Megaton.co.uk will officially ‘go live’ on 25th March, utilising much of the magazine’s content but also creating additional online editorial and advertising solutions.

It's a bit short-sighted (aka bad planning) to launch your website weeks after the first issue of your publication. And flat, paper-based 'gifts' aren't usually regarded as such by the Customers. Still, good luck to them. I'll have a look at it with my two in mind.

If you click on the link you'll see the Megaton website is already live. I think that March 25th date must be a typo in the press release. Well spotted though!

Flat paper-based gifts used to be the norm for comics so full marks to Megaton for trying to revive them - and it makes the mag stand out better on the shelf rather than being bagged with a toy. Megaton is aimed at a slightly older reader than other kids' mags so hopefully they'll appreciate the contents rather than the gifts. Time will tell. (And distribution. Didn't see any copies in Birmingham Smiths yesterday.)

If I was being negative I'd say that, from the cover, it looks a little too much like every other boys comic out there at the moment which is a shame really as it'd be so easy to do an exciting, striking and colourful cover that would stand out like a sore thumb in the crowded racks in Smiths and the supermarkets. But I'm more than happy to give it a go (and will use the 7 year old power of my son to judge if it's cool enough).

My shops don't have it in yet.

Well, I trotted into town with my son and picked up Megaton this morning. I was a little disappointed in that it's very much just a modern boys comic with more pages (scattergun design and soundbite content) rather than trying for something a bit different. The 'reviews' are quite poor and bizarrely show an annotated controller for the game's respective console as if you can gain any real perspective on how good the title's going to be by knowing that A=fire. The three strips are lumped together in the centre section and are ok (although I was surprised to see Samurai Jack in there as I haven't seen him on CN for ages now).

I hope it does well for them but I probably won't get it again and my son was non-plussed by it (despite it having Pokemon and Ben 10 game stuff in it). I still think there's room for a really fresh, exciting games/comics mag for kids that's cool and intelligent and doesn't slavishly follow the current kids title template.

I'd love to get my hands on a project like that. Imagine an official Nintendo comiczine with UK created strips on Mario, Starfox, Zelda and Metroid as well as reviews and articles on Wii and DS games.

The early issues of Sonic the Comic were a bit like that; various strips based on Sega games. Over time it became purely Sonic strips, but I've always thought there was definitely still a market for an anthology comic that was based on several games.